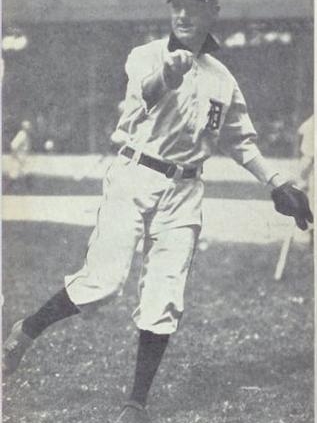 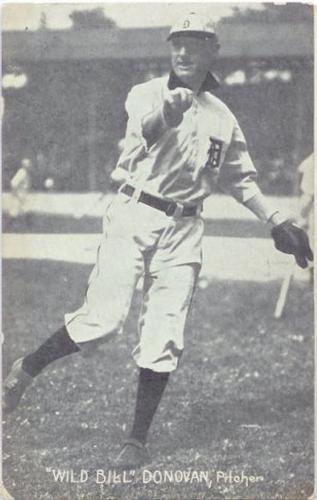 With the 1908 American League championship on the line at South Side Park in Chicago, Tigers manager Hughie Jennings handed the ball to Bill Donovan (17-7). Donovan, sometimes called Smiling Bill, had every reason to smile after the game. His two-hit shutout of the surprisingly error-prone White Sox gave Detroit a 7-0 victory, and their second consecutive World Series berth.

Repeating as champion was not easy for the Tigers. Detroit limped to a 3-9 record in April, and was just 22-23 on June 9, before claiming the victory in 10 of its next 12 games to finally establish itself as a winning team. On July 15 the Tigers reached the league’s summit, taking a one-game lead over the St. Louis Browns, and held the top spot until they fell behind the Cleveland Naps on September 21. Detroit regained the lead by one percentage point on September 27.

When Detroit began its final three-game series of the season in Chicago, it was clinging to first, and either the White Sox or Naps had the chance to pass Detroit in the standings and take home the flag. Detroit (89-61) held a 1½-game lead over Cleveland (88-63), and led 1906 champion Chicago (86-63) by 2½ games. While the Tigers and White Sox were meeting head-to-head, the Naps visited St. Louis for three games with the fourth-place Browns.

Chicago beat Detroit 3-1 on October 4, while Cleveland and St. Louis tied, 3-3. Because of the tie, the Naps and Browns scheduled a doubleheader for October 5, to be followed by their third and final meeting on the 6th.

On October 5 Chicago defeated Detroit 6-1 as Ed Walsh struck out nine, allowed just four hits, and raised his record to 40-15. The Naps and Browns split their doubleheader, eliminating Cleveland from pennant contention and setting up a winner-take-all match between the Tigers and White Sox for the AL flag on October 6, the season’s final day.

Donovan had been a huge contributor to Detroit’s 1907 pennant, compiling a 25-4 record, including wins in his final eight decisions. Although he was not as dominant in 1908, he was still the logical choice for this important game. In his most recent start, three days earlier, he shut out the Browns. Detroit’s other likely starters, Ed Killian, Ed Summers, and George Mullin, had all pitched more recently and less effectively.

Opposing Donovan was Doc White (18-12). Chicago manager Fielder Jones had waited nearly until the last minute before settling on White as his starter. He considered Frank Smith (16-17), or even Walsh, although the big right-hander had pitched six times in the last nine days, and would have been starting for the second day in a row.

White had a hot hand, having won his last seven decisions. Not since August 20 had he left the diamond in defeat. He also could boast of a 5-3 season record against Detroit, including a 3-1 victory two days earlier, when he pitched a complete game and held Detroit to five hits. Smith was better rested, but he and Jones were feuding,1 so the manager tapped White despite his short rest.

Chicago’s baseball faithful came out in great numbers. As many as 25,000 fans were squeezed into South Side Park, well above its listed capacity of 14,000.2 It was the largest weekday attendance ever at the ballpark, and it forced owner Charles Comiskey to close gates early to prevent the surging crowd from making play impossible. American League President Ban Johnson warned the umpires to keep the foul lines clear at all times to keep the crowd from encroaching into playing territory.3 As it was, spectators filled the stands and stood in the outfield and foul territory, requiring special ground rules.4 Customers in one section instituted a ground rule of their own, outlawing hats, and peppering men and women alike with paper missiles until they removed the offending derby or millinery.5

Cheers rolled like thunder when White whizzed his first two pitches past the Tigers’ Matty McIntyre. But his next two pitches missed the plate, and then McIntyre singled sharply. Donie Bush fanned after failing to sacrifice, but Sam Crawford doubled into the crowd in right field, forcing McIntyre to stop at third. Ty Cobb tripled to left-center field, sending both runners home and chasing White from the mound. Patsy Dougherty touched the ball before it rolled into the overflow area, so Cobb was not held to a double.

Walsh, who had pitched so brilliantly the previous day – and on so many other days – came in to put things right; but he could not. Claude Rossman hit an easy bouncer to first baseman Frank Isbell, who fumbled it, allowing Rossman to reach first, and Cobb to score the third Detroit run. Walsh tried to pick Rossman off first, but his throw went into the crowd, advancing Rossman to second. Germany Schaefer singled to center, scoring Rossman, and Schaefer continued to second base on the throw home. Another error, this one by third baseman Lee Tannehill, put two runners aboard with one out, but Red Downs popped up a bunt to Walsh, and Donovan fouled out to the catcher, ending Chicago’s nightmare. Detroit led 4-0.

The Tigers took advantage of another error in the second inning to stretch the lead. With two outs and Crawford on second base, Cobb’s infield single sent Crawford to third. Walsh threw to catch Cobb off base, but when Isbell muffed the throw, Crawford sprinted home with the Tigers’ fifth run.

While Donovan’s teammates piled up runs, he was breezing through the White Sox lineup. He issued a walk with two outs in the second inning, and surrendered his first hit in the fifth when Billy Sullivan singled, but neither runner advanced beyond first.

Chicago finally gave signs of life in the sixth inning. Smith, who had replaced Walsh an inning earlier, hit a slashing single to left, and when Ed Hahn walked, Smith trotted to second. Jones took two strikes, but – under pressure from 25,000 swarming, screaming fans, who were described by reporter I.E. Sanborn as “bedlam gone bughouse”6 – Donovan suddenly lost sight of home plate, missing with three straight pitches. If Donovan walked Jones, it would fill the bases with nobody out, and the White Sox just might turn things around.

But there was no glorious Chicago comeback. Instead, odd behavior halted play, and deflated the rally. Jake Atz, coaching at third base, “went out of his head completely.”7 Spurred on by the roaring crowd, “he raced up and down the line like a maniac,” yelling at Donovan.8 Umpire Jack Sheridan warned Atz to stop his antics, but Atz either could not hear Sheridan through the din, or ignored him. Sheridan stopped the action, walked toward Atz, and told him to return to Chicago’s bench. Atz refused, and argued frantically until he was banished from the game.

The delay allowed Donovan to compose himself.9 When play resumed, he fired a questionable third strike past Jones. Isbell also fanned, and when Dougherty lined out to center fielder Crawford, Chicago’s one opportunity to make a game of it was gone.

In the seventh inning patrons witnessed one of those plays that delight Cobb’s boosters but infuriate his detractors. Cobb was on first after beating out a bunt. Rossman grounded out to shortstop on a ball that third baseman Tannehill also went after, leaving third base temporarily unattended. Cobb ran right over second and dashed for third. Tannehill retreated to the bag to take Isbell’s throw, and “Cobb deliberately slid into and under Tannehill, giving him a terrific tumble.”10 Cobb was safe at third, but Tannehill held on to the ball, preventing Cobb from continuing to home plate.

Smith was the most effective White Sox pitcher. He held the Tigers scoreless from the fifth inning through the eighth – keeping Chicago’s flickering hopes burning – before he surrendered two runs in the ninth. Crawford’s single – his fourth hit – scored McIntyre, and Rossman’s high bounder to Smith brought home Bush, making it 7-0.

Jones walked to start Chicago’s ninth, but a fly ball, a pop foul to the catcher, and another fly ball ended the contest. Donovan was masterful. He yielded just two hits and three walks, while securing nine strikeouts. Only once did a Chicago baserunner occupy second base.

The victory triggered a celebration in Detroit that at times got out of hand. The fire department extinguished numerous bonfires; a window was broken at the J.L. Hudson Store; and “after 10 o’clock fights were of frequent occurrence.”11

The Tigers faced Chicago’s other team, the Cubs, in a rematch of the 1907 World Series. Donovan pitched game two in Chicago, and game five in Detroit, but lost both times. The Cubs triumphed four games to one.