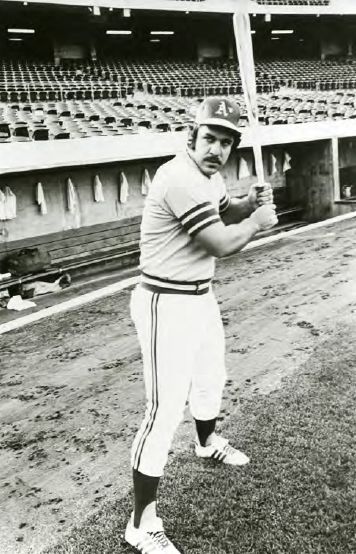 Pat Bourque was a first baseman who played in 201 major-league games between 1971 and 1974. Looking something like a mustachioed Ted Kluszewski, Bourque was a powerfully built 6-foot-tall, 220-pound left-handed slugger whom The Sporting News once described as being “built like the village blacksmith.”1 Throughout his six-season minor-league career (1969-1974), Bourque posted excellent power numbers and was widely considered a top major-league prospect. Bourque spent four seasons in the major leagues with three teams: the Chicago Cubs (1971-1973), the Oakland Athletics (1973-1974), and the Minnesota Twins (1974). Afterward Bourque played in the Mexican League for the Mexico City Diablos Rojos (1975-1978), where he became one of the league’s biggest stars.

Patrick Daniel Bourque was born on March 23, 1947, in Worcester, Massachusetts, the fourth of Antonette and Roland Bourque’s five children. He grew up in the nearby bedroom community of Shrewsbury and attended St. John’s Prep High School, a Catholic institution run by the Xaverian Brothers, in Shrewsbury. Following in the footsteps of his older brother, Mike, who pitched briefly in the New York Mets organization, Bourque starred on the St John’s baseball and football teams. He accepted a scholarship to play football and baseball at the College of the Holy Cross in Worcester. Bourque played linebacker for the Holy Cross Crusader football team and served as a three-year starter in the outfield for the Holy Cross baseball team (1966-1969). The 1967 team reached the NCAA Tournament, the college’s 11th appearance since 1952. Bourque was the baseball team’s captain in his senior season and was named to the District 1 All-New England team.2 The Cubs drafted him in the 33rd round of the 1969 amateur draft and assigned him to the Huron (South Dakota) Cubs of the Class A Northern League.

Bourque excelled at Huron, hitting .281 with a .398 on-base percentage, 5 home runs and 34 RBIs in 65 games. In 1970 the Cubs elevated Bourque to their affiliate in Quincy (Illinois) of the Midwest league and moved him from the outfield, where he had struggled for Huron in 1969, to first base. Bourque earned a spot on the Midwest League All-Star team with a .326 batting average, a .439 on-base percentage, 13 home runs and 77 RBIs. The Cubs invited the hard-hitting prospect to their 1971 spring training in Mesa, Arizona, then placed him in Double-A San Antonio for the start of the season.3 Bourque transitioned well to Double-A ball, hitting .279 with 15 home runs and 83 RBIs for the San Antonio Missions of the Dixie Association. On May 3 he drove in eight runs in a game against Albuquerque Dodgers.4 Topps named Bourque its Dixie Association Player of the Month for that month.5  In June The Sporting News profiled Bourque, commenting on his “village blacksmith” physique and describing him as one of the most promising prospects the Cubs had produced in years.6 Bourque made a brief stop at Triple-A Tacoma late in the 1971 season before being elevated to the major leagues in a September call-up along with pitchers Burt Hooton, Larry Gura, and Jim Colborn.7

Bourque made his major-league debut on September 6, 1971, against the Pittsburgh Pirates at Three Rivers Stadium, striking out against Bob Moose as a pinch-hitter. Bourque played in 14 games and hit .189 with one home run (off Rick Wise of the Philadelphia Phillies) and three RBIs in 37 at-bats.

After an up-and-down spring training in 1972, the Cubs sent Bourque to the Wichita Aeros of the Triple-A American Association. He missed more than a month of early-season action with a back injury, but returned in late June and went on a tear that lasted for the rest of the season.8 “The village blacksmith” led the Aeros to the West Division championship and won the American Association’s Most Valuable Player award. Bourque hit .279 with 20 home runs and 87 RBIs in 119 games for the Aeros. He started at first base for the West team in the American Association All-Star Game. On August 7 Bourque put the finishing touches on a 5-4-3 triple play, the first triple play in Aeros’ history.9 After the Aeros were swept by the Evansville Triplets in the American Association playoffs, Bourque was called up by the Cubs and played in 11 games, hitting .259 with five RBIs in 27 at-bats.

In an interview with Jerome Holtzman after the 1972 season, Bourque said he was ready to be a full-time major leaguer.10  Unfortunately for Bourque, the Cubs roster had a backlog of aging players vying for time at first base, including Billy Williams, Joe Pepitone, and Jim Hickman. In April 1973 Bourque was one of the final two players cut from the Cubs’ Opening Day roster.11 He was sent back to Wichita, where he continued his assault on American Association pitching.  Bourque hit six home runs in a four-day stretch between May 10 and 13, 1973.12 The Cubs recalled Bourque on May 19 after they traded Joe Pepitone to Atlanta. When Bourque arrived in Philadelphia for a game against the Phillies, the Cubs’ clubhouse staff did not have a uniform large enough to fit him. A size 48 jersey was airmailed from Chicago for Bourque just in time for the next evening’s game, which he was scheduled to start, but which ended up being rained out.13

Bourque impressed Cubs fans and management alike during his first month with the club, more than making up for the departure of Pepitone. In his first 15 games in 1973, he belted four home runs and hit .304 for a Cubs team that took an early lead in the National League East race over the St. Louis Cardinals and New York Mets. “I’m not overmatched,” he told Jerome Holtzman in a June 1973 interview. “If I couldn’t handle big-league pitching it would have shown up right away.”14

Bourque failed to keep up that pace at the plate. He slumped through the second half of June and all of July. His average dropped to .197 through the end of July. Bourque’s struggles mirrored those of the Cubs, who had led the National League East by eight games at the end of play on July 1, but had fallen 3½ games behind the Cardinals by August 1. Through August the Cubs struggled to stay in the race and Bourque struggled to keep his average over .200. On August 29, the Cubs traded him to the defending world champion Oakland Athletics for pinch-hitter/infielder Gonzalo Márquez. The Athletics, in need of a power-hitting left-handed bat who could serve as their designated hitter. Marquez had been a pinch-hitting hero for the A’s in the 1972 American League Champion Series and the 1972 World Series.15

Bourque played in 23 games for the A’s in August and September 1973, frequently as a pinch-hitter. He continued to slump at the plate, hitting .197 with two home runs and nine RBIS for the A’s, who clinched their second consecutive division title on September 22. For the season as a whole, Bourque hit .204 with 9 home runs and 29 RBIs. A’s manager Dick Williams put Bourque on the roster for both the American League Championship Series and the World Series. During the A’s five-game victory over the Baltimore Orioles in the ALCS, Bourque went 0-for-1 in three plate appearances. He was walked twice, once intentionally. During the A’s seven-game victory over the Mets in the World Series, Bourque played in two games. In the A’s 3-2 victory in Game Three at Shea Stadium in New York, Bourque pinch-hit for catcher Ray Fosse in the seventh inning and took over for Gene Tenace at first base. In two at-bats, Bourque went 1-for-2, reaching base on a bunt single off Ray Sadecki in the top of the ninth inning. In the Mets’ 2-0 victory in Game Five, Bourque came in as a defensive replacement at first base in the bottom of the eighth inning, but he did not come to the plate. For his role on the A’s 1973 championship team, Bourque received $4,923.52.16

Bourque started the 1974 season on the A’s roster. During April and May, he served primarily as a pinch-hitter, putting together a .286 batting average with seven RBIs, but failed to hit any home runs. On June 2 the A’s demoted Bourque to Triple-A Wichita, to the surprise of his teammates. “There are other guys on the team who are contributing a lot less than Pat Bourque,” an unnamed teammate was quoted as saying by The Sporting News.17 On June 15 the A’s brought Bourque back to Oakland but he was unable to match his early-season success as a pinch-hitter. By the middle of August, Bourque’s average had fallen to the .220s and he had hit only one home run in 96 at-bats. On August 19 the A’s traded him to the Minnesota Twins for first baseman/outfielder Jim Holt. A change of location did not end Bourque’s struggles at the plate.  He hit .219 in 64 at-bats for the Twins in August and September.

After the 1974 season, the Twins traded Bourque back to the Athletics for outfielder Dan Ford and minor-league pitcher Dan Myers.18 The A’s cut Bourque during spring training in 1975, optioning him to Wichita. Bourque refused to report to the minor leagues and was released by the A’s.19 He continued his career by signing on with the Mexico City Diablos Rojos of the Mexican League. He played for the Diablos Rojos for four seasons (1975-1978) and appeared in three Mexican League All-Star Games. He won the Mexican League batting title in 1975 and earned a Silver Bat Award from Louisville Slugger for his performance. The Diablos Rojos won the 1976 Mexican League championship and were the runners-up in 1977 during Bourque’s tenure with the team.20 He became a fan favorite in Mexico City. In 1977 he donated money to keep an orphanage open in the city.21

Bourque left professional baseball after the 1978 season and moved his family full-time to his offseason home of Flagstaff, Arizona. He worked for Waste Management Inc. for many years. As of 2014 he served in a managerial position for the city of Flagstaff’s Public Works Department. Bourque has also worked as a private hitting coach in Arizona for a number of years.

The College of the Holy Cross Athletics Department: goholycross.com