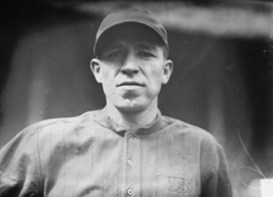 But Possum Whitted not only played in two World Series, he did it in consecutive years for different teams. In 1914 he was traded in midseason from the St. Louis Cardinals to the Boston Braves, becoming a part of the Miracle team that went from last place on July 4 to first place in early September and then swept the Philadelphia Athletics in four games in the World Series.

Traded again during the offseason to the Philadelphia Phillies, he again played for a pennant-winning club, but the Phillies lost the 1915 World Series to Boston Red Sox in five games.

George Bostic “Possum” Whitted,1 one of only five major leaguers to have played at least 40 games at every position except pitcher and catcher, was born on February 4, 1890, in Durham, North Carolina, to Julius Monroe Whitted and Ella Frances Howerton Whitted. The 1900 census shows Whitted as one of eight children, while the 1910 census shows him as one of ten children, with six children living. The elder Whitted worked in successive decades as a teller, a bookkeeper, and a public accountant.2 Whitted’s mother apparently never worked outside the home.

There seems to be a difference of opinion on how Whitted got the nickname Possum. One source reported that he picked it up as a boy.3 Another said he got the nickname because of his tales of possum hunting in the woods around Durham.4 Either way, it was a nickname that stuck with Whitted throughout his major-league career. (Possum is the colloquial name for opossum, a marsupial found in abundance in the Carolinas.) Whitted also had the nickname Poffin Belly.

He had an interesting childhood, evidenced by a clip from his Hall of Fame Library player file. “He is said to have fallen out of a second story window at the age of six months without injury. He was kicked by a mule and the mule broke his own leg. He did not want to go to school and the school burned down.”5

Whitted attended Trinity Prep School (now Duke University) for a time, but joined the ranks of professional baseball in 1910, playing first base for the semipro Wadesboro Independents. As he told it sportswriter J.C. Kofoed for an article in Baseball Magazine, “I had a very successful season with that club in 1910. … But I wanted a bigger game. When our season ended I traveled down to Savannah and induced the manager of the South Atlantic team there to give me a try-out. Eight games in the outfield was the extent of my apprenticeship with Savannah. Because I failed to hit hard from the start I was released, but Jacksonville signed me up – probably because of my first base record with Wadesboro. About a dozen men had tried to play the near corner for the Jacks, but I was lucky enough to win the post, and finished the season there.”6

Between the two South Atlantic League Class C teams, he batted .189 in 21 games, but Jacksonville saw enough talent in him to bring him back in 1911. Whitted told Kofoed, “In 1911 I automatically became the regular incumbent of that position (first base), but I shared in the financial and artistic failure of the league. I batted only .229!”7

Jacksonville brought him back in 1912, and Whitted had the breakthrough year that would send him to the majors. He said, “The following season was a reverse in every way. I was shifted from first to third base, and my hitting immediately began to improve.”8

Whitted batted .307 in 1912 for Jacksonville, which finished first in the league and defeated Columbus in the playoffs. About his year, he said, “I finished the season third in hitting and run getting, first in base running and fielding. The upshot of it was that the St. Louis Nationals bought me, and I received my first taste of big league ball.”9

In his first taste of major-league experience, at the end of the 1912 season, Whitted batted .261 in 12 games. With three doubles and seven RBIs in that limited playing time, it’s easy to assume that the Cardinals expected great things from Whitted in the future. But it would not happen with the Cardinals. In 1913, Whitted batted only .220 in 123 games, and at the start of 1914 his hitting dipped to .129 in 20 games.

Asked whether the change from Class C to the majors was great, Whitted said, “Great? I should say so. The Cardinals were demoralized, and I was shifted from one position to another, playing third base, shortstop and the outfield. My hitting was not what it should be, and at the beginning of 1914, though it improved, it did not suit Miller Huggins, and he traded Teddy Cather and I to the Braves.”10 The trade to the Boston Braves came on July 4, 1914, a day pinpointed as the time the Braves began to lay claim to the nickname Miracle Braves by beginning their improbable rise from last place to winning the National League pennant going away.

Whitted’s hitting did improve with the Braves; he batted.261 with 31 RBIs and his first two major-league home runs in 66 games. His versatility in the field was also very useful to the Braves. Sportswriter Harold Kaese wrote, “Whenever [Johnny] Evers was hurt and unable to play, either Oscar Dugey … or Whitted substituted for him at second base.”11 Whitted played every position for the 1914 Braves except pitcher and catcher.

One of the factors in the Braves’ turnaround was manager George Stallings’ platooning of his outfielders depending on whether the Braves pitcher was left-handed or right-handed. This was not the first time platooning was employed, but it was still a rather novel concept in 1914. Whitted alternated with left-hander Larry Gilbert in center field.

Whitted played in every inning of the Braves’ World Series sweep, batting fourth throughout the Series even though the Athletics started three right-handed pitchers. He was just 3-for-14, but one of his hits was a two-run triple in Game One.

After playing a key role in the Braves’ run to winning the World Series, Whitted may have assumed that he would be with the Braves for years to come. But in December the Braves traded Whitted, infielder Oscar Dugey, and cash to the Philadelphia Phillies for infielder-outfielder Sherry Magee. (Whitted and Dugey went to the Phillies in February 1914.) Manager Stallings was happy to get Magee, a good hitter, but parted with Whitted reluctantly. “… (H)e hated to see Whitted go,” Kaese wrote. “He regarded Whitted as a key player on the 1914 Braves, because he could fill in acceptably for Evers at second base, aside from playing a good game in center field.”12

Whitted’s new team won the pennant in 1915, finishing seven games ahead of the Braves. Whitted contributed a steady .281 average in 128 games, mostly playing the outfield with a few games at first base. In the World Series he was just 1-for-15 with one RBI as the Phillies fell to the Boston Red Sox in five games.

Whitted played in 24 games for the Phillies in 1918 before going into the Army. Back from military service in 1919, he rejoined the Phillies and was batting .249 in early August when he was traded to the Pittsburgh Pirates for outfielder Casey Stengel. Whitted enjoyed one of the best stretches of his career with the Pirates, batting.389 in 35 games in the final seven weeks of the season. He played two more seasons with the Pirates, batting .261 in 1920 and .283 in 1921. He played third base almost full-time in 1920 and was back in the outfield in 1921.

In 1921, the Pirates came close to winning the pennant, but faded in the stretch. Pirates owner Barney Dreyfuss blamed the loss of the pennant on too much “horseplay,” with Whitted being one of the pranksters along with Charlie Grimm, former Brave Rabbit Maranville, and Cotton Tierney joining in. According to sportswriter Fred Lieb, the four formed a singing quartet, with Whitted singing baritone.”14

Whitted ended his major-league career with one fruitless at-bat for the Brooklyn Robins in 1922 after the Pirates sold him to the Robins in March 1922.

Fred Lieb and Stan Baumgartner, in their history of the Phillies, said of Whitted, “He did not have the natural ability of some of the other stars of the club, but he was fast and how he hustled! In his own way, he was a National League version of Ty Cobb. George would kill you for a run, or dive into a stone wall to make a catch. He hustled from the moment he got on the ball field until he left.”15

Whitted remained active in baseball until 1937, playing and managing with several minor-league teams, including a stint of six years with his hometown Durham team of the Class C Piedmont League. In 1929 he led Durham team to a first-place finish, but lost in the playoffs. In 1930 Durham finished second but won the playoffs.

Whitted’s obituary in The Sporting News obituary said he was involved in baseball until 1941, but apparently he was not serving as a player or manager during that time, since there are no records of it.

During World War II, Whitted was the athletic director for the shipyards in Wilmington, North Carolina. After the war, he worked for Wilmington street department, then in the parks and recreation department until he retired. Whitted died on October 15, 1962, of complications after hip surgery. He was 72 and was one of the last surviving members of the Miracle Braves of 1914.

In addition to the sources noted in this biography, the author also accessed the following sources: