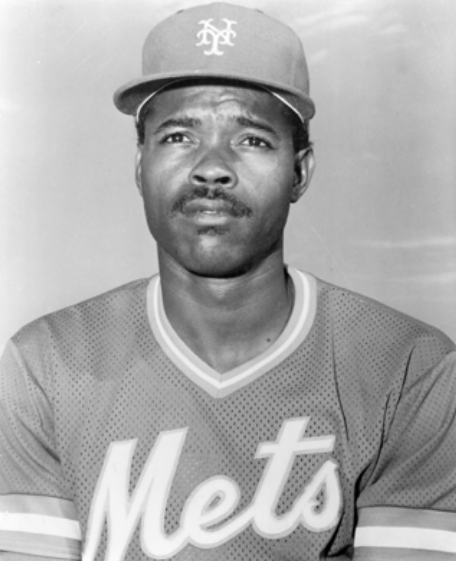 Standing at 6-feet-1 and weighing only 165 pounds during his playing days, Rafael Santana may not have been a big man but he played big for the New York Mets when they needed him to. Santana did not carry a big bat but he fielded his shortstop position with flair at times. Some of Santana’s best numbers came in the Mets’ 1986 championship season when he said, “We had the best chemistry.”1

Born on January 31, 1958, in La Romana, Dominican Republic, Rafael Francisco Santana played in the majors for seven seasons. He spent the majority of his career with the Mets but also spent time with the Yankees, Cardinals, and Indians. Little is recorded about his life before he came to the United States to play baseball. He got his chance in professional baseball after being scouted in winter ball by scout Eddy Toledo.2

Santana was originally signed by the New York Yankees as an amateur free agent in 1976 at the age of 18. He played for Oneonta, Fort Lauderdale, and Nashville in the Yankees’ minor-league system from 1977 to 1980. His best year as a Yankee farmhand came in 1979 when he hit .263 in 133 games at Class A Fort Lauderdale. He was traded by the Yankees to the Cardinals in February 1981 for a player to be named later, who turned out to be pitcher George Frazier. Santana played for 2½ years for Cardinals’ Double-A and Triple-A teams. His best season while in the St. Louis system came in 1982 with Louisville. He played in 121 games and hit .286, scored 65 runs and knocked in 53. He made only 11 errors in the field while splitting time at second base, shortstop, and third base.

Santana made his major-league debut with the Cardinals on Opening Day 1983 against the Pittsburgh Pirates, going 0-for-1 in the game after entering as a late-inning defensive replacement in a 7-1 loss. He did not get much of a chance to play in St. Louis because Ozzie Smith was the Cardinals’ shortstop. After playing in just 30 of the Cardinals’ first 72 games, with only 17 plate appearances to show for his time, Santana was sent back to Triple-A Louisville, where he spent the balance of the season.

The Cardinals released Santana on January 17, 1984, and the Mets picked him up as a free agent that same day. He remained with the club through the 1987 season. When he learned that the slick young shortstop was available, Mets manager Davey Johnson reportedly exclaimed, “Hell, yes, I like him. Sign him.”3

In Santana’s first full season with the Mets, 1984, he backed up starting shortstop José Oquendo and hit .271 in 51 games. During one 1984 game against the Pirates, manager Chuck Tanner raved about a play Santana made, saying it was an impossible catch but somehow Santana made the grab. Santana missed two weeks late in the season when he went on the disabled list with a lacerated right thumb. He proved to be durable in the long run, though; this was his only stint on the DL until he hurt his elbow toward the end of 1988 and had to have Tommy John surgery in 1989.4 The Mets traded Oquendo away after the 1984 season, entrusting the shortstop position to Santana. The 27-year-old Santana had his best season at the plate in 1985. He hit a career-high .257 in a career-high 154 games. He also showed that he would not provide much power at the plate, though he did hit one home run that season. When the Mets beat the Phillies 10-6 Santana provided some of the pop. “I hit a home run a year, but when I hit it, I hit it good,” he said.5

As the starter in 1986, Santana hit only .218 but he had some worth to the club as he batted in the eighth spot in the lineup. Hitting right in front of the Mets pitchers, Santana had 12 intentional walks, tying him for 10th in the NL. One of his highlights came on August 26 when the Mets pounded the Padres, 11-6. Santana’s contribution was his first home run of the season and only the third in his career. He almost hit a second homer in the same game but a catch by Kevin McReynolds on the warning track ended that brief power surge. Santana’s best fielding percentage was .973 in both 1986 and 1987. He made just 16 and 17 errors respectively those seasons. With these numbers and his range, Santana was considered a solid defensive player. More importantly, Santana proved a steadying influence on a team known for its fire and its antics. Santana simply wanted to play and win. One reporter described him as “a quiet and pivotal piece of the ’86 Mets.” In the National League Championship Series against Houston, Santana set an NL record for most putouts (13) and assists (18) in a six-game series as a shortstop. During the World Series win over Boston, Santana hit .250 with five hits in 20 at-bats and three runs scored.6 He thought the overall 1986 year was a bit boring compared with previous seasons because of the Mets’ large lead in the pennant race. He said, “It’s nice to have a big lead. But I missed that. I liked the pressure. Last year I’d wake up and the first thing I’d think about was, how are we going to win tonight? This year the first thing I think of is breakfast.”7

Santana’s most productive hitting came in 1987 when he hit .255 with 5 home runs and knocked in 44 runs in 139 games. The Mets needed his glove in the lineup every day and got a little boost with his bat. The Mets, however, traded Santana in the offseason.

The 1988 season found Santana across town playing for the Yankees after being traded for prospects Steve Frey, Phil Lombardi, and Darren Reed. The trade to the Yankees came because the Mets wanted to give Kevin Elster a chance to be the everyday shortstop. For Santana that meant no more everyday playing, so he was excited for the trade. Yankees manager Billy Martin wanted Santana because Wayne Tolleson was recovering from shoulder surgery. Santana was happy to be back with the Yankees organization as he had fond memories of his opportunity with the club. Recalling his days in the Yankees farm system, he said, “My locker was there, in that corner. I was just a kid, and it felt strange because it was my first time in a big-league camp. But I was happy to be here; to join all the guys and meet someone like Reggie Jackson.”8 Santana had one claim to fame that season as the Yankees made their playoff run. He was lifted for a pinch-hitter more times (40) than anyone else in the majors. Santana did prove durable for the Yankees, however, playing much of the season with bone chips in his elbow. In fact George Steinbrenner said, “I’d love to have Santana on my football team.”9 Unfortunately for Santana, he missed the entire 1989 season after having elbow surgery.

After the Yankees released Santana at the end of the 1989 season, he signed a free-agent contract with the Cleveland Indians, the final stop in his major-league career. With the Indians he had a chance to reunite with three of his teammates from the 1986 championship Mets, Keith Hernandez, Stan Jefferson, and Jesse Orosco. Santana played only seven games with the Indians, who had the youngster Felix Fermin as their everyday shortstop. Santana had a tough time holding on to a starting spot in his career as teams were always looking to someone younger who they hoped would provide more offense.10

After his playing career ended, Santana went into scouting and managing. His managing stints include the Azucareros del Este in the Dominican Republic (1992-93), the Single-A Winston-Salem Warthogs (2006), and the Double-A Birmingham Barons (2007). Santana’s managerial stint with the Warthogs was his first in the United States. His two years managing in the United States resulted in a .460 winning percentage in 278 games. Santana also spent four seasons coaching in the Kansas City Royals’ minor-league system. He joined the Boston Red Sox organization in 1996 and spent parts of three years overseeing their Dominican program and working as an infield instructor for their Class A team in Lowell.

Santana joined the White Sox in 1999 and as of 2015 was the Dominican Republic scouting and player-development supervisor for the club, after working as an infield instructor and first-base coach. One of the players he kept an eye on was his son Alex who was drafted by the Los Angeles Dodgers in the second round in 2011.11 While working with the Dominican program, Santana became aware of some irregularities. He learned about the financial exploitation of young Latin players in 2008. Santana reported to White Sox owner Jerry Reinsdorf that the senior director of player personnel, David Wilder, was involved in kickbacks from signing bonuses and contract buyouts. Wilder was Santana’s direct boss. In addition to launching an internal investigation, Reinsdorf informed the league and it began an investigation as well. Wilder was fired along with two Yankee scouts and one Red Sox scout for their roles.12

Santana and his wife, Gloria, have two other children, Audry and Dhayan. Audry was drafted in the 38th round by the White Sox and played 18 games at the Rookie League level in 2013 and 2014. Santana often returned to New York for Mets events and said fans still recognize him. He told a New York sportswriter he loved playing in the city and felt appreciated by the fans. Santana said he got the most out of his playing career, which is all anyone can ask for. He did not want to look back with any regrets and said he had none. Seven years in the majors and a World Series ring is not a bad career.13

All statistics from baseball-reference.com.