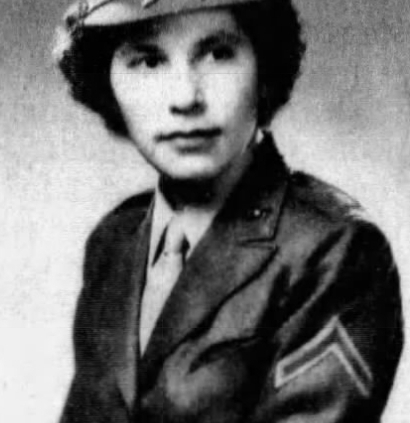 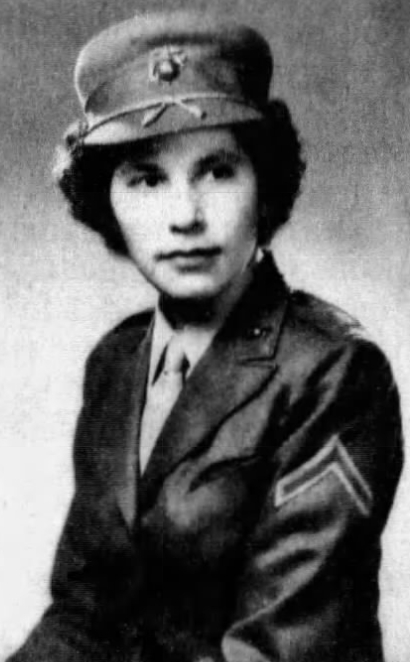 Rella Swamp holds the distinction of being one of the 17 original 1943 Rockford Peaches in the inaugural year of the All-American Girls Professional Baseball League (AAGPBL). Swamp played in one game as a late-inning defensive replacement and also batted once in a second game. Her 10-game stay on the Rockford roster ended as she was released when roster sizes decreased that June. She never again played in this highest level of women’s pro ball but led a fascinating life with many other athletic accomplishments.

Born in Appleton, part of Wisconsin’s Fox Valley region, on January 5, 1924, Rella Ann Swamp grew up as the youngest of four children in a green-shingled house on South Walter Avenue on the east side of town.1 Her father, Joel, worked as a paper worker, wood worker, and pulp maker in the local paper and pulp mills, while her mother, Irene Hill Swamp, stayed at home with Rella and her three older brothers.2 Both of her parents were members of the Oneida Nation.3 Irene died at age 32 in 1931 of a kidney condition and Rella was sent to an Indian boarding school in Wittenberg, over 60 miles from home, after her mother’s early death. This stay was traumatizing and short for Rella.4 Joel never remarried, passing away in 1982 at age 91.5

Rella graduated in 1941 from Appleton High School in a class of 449.6 During her school years, long before Title IX, she participated in as many sports as possible. In 1939, Swamp first appeared in an Appleton sports section as an infielder for a local Fox Valley league softball team that later won their league championship in a game in which she batted 1-for-3 and played right field.7 At the end of her junior year, the athletically gifted Swamp was the only member of the Girls’ Athletic Association of Appleton High to earn 1000 points for her sports achievements in their rating system. For this, she received an official “A” emblem because girls could only compete in intramurals at that time.8 Winning the 1940 spring Appleton High girls’ ping-pong championship certainly helped in attaining those points.9

The Appleton Merchants recruited Swamp in the summer of 1940 as they competed in the Fox River Valley Girls Softball league against fastpitch teams from Oshkosh, Berlin, Fond du Lac, Green Bay, and Marinette. They participated in a state tournament in Madison, losing in the semifinals.10 During Swamp’s senior year, she was a member of Appleton’s St. Joseph Sodality basketball team. This talented group went 21-1, including a championship tournament against other Fox Valley and northeastern Wisconsin teams in nearby Wrightstown..11

After graduation, Swamp returned to the Appleton Merchants softball team, where she played first base. This 1941 team traveled more than in 1940 because they were now members of the Wisconsin State Girls’ Softball league along with Fond du Lac, Milwaukee, Watertown, Waukesha, and Madison.12

That summer, Swamp started out as a pitcher for the Menasha Merchants and Manufacturers softball team.14 She then moved over to the Appleton Bluejays, playing against opponents from towns such as Merrill, Rhinelander, and Manitowoc before switching back to the Merchants later in the year.15

In 1943, Rella Swamp made the substantial jump from amateur to pro athlete. Chicago Cubs owner Philip K. Wrigley started the All-American Girls Softball League (now referred to as the All-American Girls Professional Baseball League) to provide a replacement for minor-league teams that had disbanded owing to World War II manpower needs and the possibility that major-league baseball would be suspended.

Territorial tryouts were held in many ballparks throughout the United States and Canada in an effort to recruit the best ballplayers for the new league. Swamp joined 50 other women at Milwaukee’s Borchert Field, home of the Brewers of the American Association, a top-level minor league. Here, tryouts were led by Eddie Stumpf, chief talent scout and future Peaches manager, and Ken Sells, president of the new league and a Cubs executive. On a cold and windy April 11, the 50 players went through calisthenics, runs around Borchert Field, throwing drills, and two rounds of hitting. After a 15-minute break, there was an intrasquad game.

Swamp, who both threw and hit right-handed, was one of 15 chosen to go to Chicago for the final round of tryouts, with extensive training and drills at Wrigley Field, beginning on May 17. All invitees were paid for their travel expenses plus regular league salaries during this time.16 Swamp was listed as an outfielder from Milwaukee at the beginning of these national tryouts.17 Although there was no reference to the league’s 1943 Helena Rubenstein charm school in any articles mentioning Rella Swamp at the Wrigley Field tryouts, it is safe to assume that she participated in this required training during her stay in Chicago.18

Rosters were selected by the managers of the four league teams (Kenosha, Racine, Rockford, and South Bend) on Wednesday, May 26. Swamp made the cut as one of 17 ballplayers assigned to Rockford. Team rosters were composed of five pitchers, three catchers, six infielders, and three outfielders with the expectation that pitchers could also fill in as outfielders. The new Peaches rode a bus that morning from Chicago to Rockford and geared up for opening day on May 30 in South Bend. Swamp was by then listed as a first baseman from Milwaukee and was pictured in the Rockford Register-Republic with her teammates and their suitcases upon arrival at noon. Securing homes to live in was that afternoon’s task.

The Peaches (named after the pastel color of their uniform skirts and blouses) then worked out for the first time on Thursday, May 27, on the practice football field just east of their new ballpark, the local high school’s 15th Avenue Stadium (later known as Beyer Stadium). Manager Eddie Stumpf led the team at this public workout.19

The 5-foot-8, 120-pound Swamp never started a game for the Peaches. Stumpf began the season with Ethel McCreary at first base and a rising AAGPBL star, Dorothy “Dottie” Kamenshek, in center field.

On Monday, May 31, Swamp made her first appearance as a Peach, pinch-hitting for pitcher Clara Cook at South Bend in the last inning of the first game of a doubleheader (both games were seven-inning affairs). She was out in her only league at-bat in an 11-5 loss to the Blue Sox. This was the third game of the season; Rockford started out with an 0-3 record.20

Swamp’s second and final outing as a Peach occurred on Friday, June 4, in Kenosha. She was a late defensive replacement for left fielder Lillian Jackson. This nine-inning game was the last of their opening road trip. Swamp never played in a Rockford home game.21

The Rockford Register-Republic reported on June 8 that Swamp, infielder from Milwaukee, had been released. A follow-up article from June 15 confirmed this release of the utility player as well as three other Peaches. Teams had carried 17 or more players up to that early point of the season but needed to get down to a 15-player roster by then, prompting league-wide releases and claims.22

By the time of the roster cuts, Dottie Kamenshek had been moved to first base and Eileen Burmeister inserted in center field. Ethel McCreary moved to the Kenosha Comets. Kamenshek became a 1943 All-Star at first base, tied for sixth place in batting average at .271. She was later a league leader in fielding and hitting multiple times.23

In the only known Rella Swamp interview, she recounted her 1943 experiences to her hometown Appleton Post-Crescent on September 29 of that year, including moving to California with a close friend:

“Mildred Dingeldein and I just finished the ’43 softball season here in Los Angeles. We played with a team called the ‘Marinerettes,’ composed of girls working in the ‘Cal-ship’ shipyards. Although we defeated a WAC team, 18-0, the brand of ball didn’t equal that played by the girls in and around Appleton. We began the season in Milwaukee by trying out for the All-American girls softball league, sponsored by Phil Wrigley of the Cubs. I was among the fortunate to be chosen to go to Chicago for a 2-week tryout period. From there, I was sent to the Rockford, Ill., team. I was with them about a week. Dingle and I also played with one of the top teams in West Allis while working in Milwaukee and before leaving for California.”24

In the spring of 1944, Swamp enlisted in the women’s reserve of the United States Marine Corps – she had always wanted to become a Marine. While she was awaiting her call, she continued working at the Los Angeles shipbuilding company that first employed her in August 1943.25 Swamp completed her basic training at Camp Lejeune in North Carolina that April. She joined the Aviation Women’s Reserve Squadron 17 at the USMC Air Station in Cherry Point, North Carolina, in July and moved to Squadron 20 in October. 26 Ever the athlete, she played forward (the only position allowed to shoot in women’s basketball at that time) on the undefeated 1945 Cherry Point basketball team.27

Swamp concluded her military career with the rank of sergeant in March 1946. She arrived in Los Angeles for her discharge and planned to return to Appleton after that.28

Swamp met her future husband, John Julian Murray, in the Marines and they were married on August 13, 1946, in Las Vegas. Also known as J. J., Murray was a corporal from Miami and kicked off the first football ever at Miami’s Orange Bowl stadium while playing for Ponce de Leon High School. The newlyweds moved to Florida to live with John’s family. John worked as an aircraft mechanic and supervisor at Eastern Airlines in Miami for 43 years. Rella was accepted into the University of Miami with aspirations of becoming a lawyer, but never attended. The Murrays had three daughters and one son with Rella serving as a stay-at-home mother, beginning in 1948. John died on March 13, 2000, at age 80, after 53 years of marriage.29

Rella found time to stay involved with the American Legion – she became a vice commander of Nan Sue Porter Post 156 in Coral Gables in 1953.30 Like many AAGPBL ballplayers, Swamp stayed physically active later in life and retained her love of sports, playing softball and basketball into her forties. She bowled in several leagues at Bird Bowl in Miami into her sixties and was an avid fan of the Packers (having grown up near Green Bay) and the Miami Heat. She even golfed with old friends when she returned to visit them in Appleton in her seventies.31

Rella Swamp died on December 16, 2004, at age 80 of a heart condition and complications of diabetes. She is buried at Flagler Memorial Park in Miami. All four of her children and six grandchildren survived her.32

According to her oldest daughter, Judy Dordel, Rella rarely spoke about her short time in the AAGPBL. She felt that the league brought in “ringers” who caused her to be cut, even after her successful tryouts. Dordel believes this reluctance to talk stemmed from the finality of how Rella was released – she was never given the opportunity to demonstrate her skills in a full game. She never participated in AAGPBL reunions or events. Even though it was her team, the 1943 Peaches, portrayed in the hit 1992 movie, A League of Their Own, Rella rarely discussed the film and never viewed it.33

Rella did learn shortly before she died that her name was included in the Miller Park (now American Family Field) Walls of Honor AAGPBL display in Milwaukee. She was also aware that the AAGPBL was honored in the Women in Baseball exhibit at the National Baseball Hall of Fame in Cooperstown.

Even though Rella Swamp spent less than a month of her 80 years in the AAGPBL, she had the distinction of being involved from the very beginning with tryouts, training camp, and the opening of that first season. For that time as an original Rockford Peach, she is remembered as an important part of American sports history, even with her one at-bat and one defensive substitution.

This biography was reviewed by Paul Proia and Rory Costello and fact-checked by John Watkins.