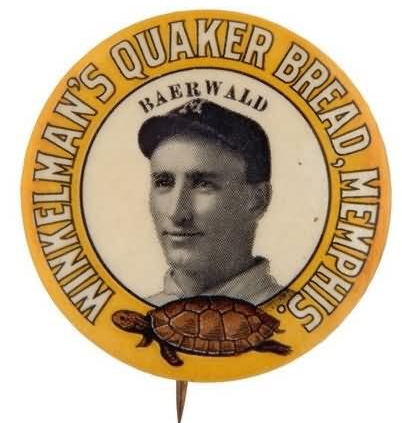 Well, what difference does it make what name you play under so long as you get your money? “Bell” is a good baseball name and an easy one for the sporting writers to remember. 1 — New York Highlanders manager Clark Griffith (1907) 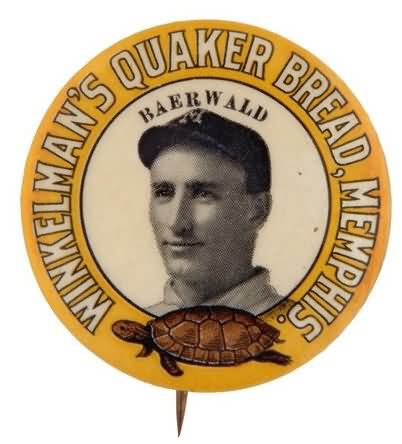 Rudolph Fredrich (Fred) Albert Baerwald was born on January 1, 1881, in Wausau, Wisconsin, the eighth of 12 children of Charles Carl Baerwald, a laborer, and Amelia (Borchardt) Baerwald, both German-born. As of 1900, Rudy still lived in Wausau and worked in a factory. The next year, he began playing in the non-affiliated Wisconsin State League for the local Wausau affiliate, before moving to the Appleton contingent before the end of the season.2

In 1902 and 1903, Rudy played for Wausau and then Chippewa Falls in the semipro Northwest League (consisting of teams from Minnesota and Wisconsin) for manager Andy Porter. 3 In 1904, Rudy had his first taste of Organized Baseball, suiting up first for the Colorado Springs Millionaires of the Class A Western League. By June, the right-hander was playing for the Pittsburg (Kansas) Coal Diggers of the Class C Missouri Valley League. On July 15, Baerwald caught the final out in left field of Pittsburg’s 19-inning victory over Kid Durbin and Fort Scott (Kansas).4 Over forty years later, Rudy still had the ball. 5

The next season, Baerwald signed on to play for the Joplin (Missouri) Miners of the same league, although it was now called the Western Association. In mid-July, when infielder-manager Jack Fillman was promoted to Kansas City, young Baerwald grabbed the managerial reins. The catcher-outfielder-manager hit but .224 in 103 games for the sixth-place Miners.

Referred to at times as “Dude” Baerwald from Wausau,6 he returned from playing winter ball on the West Coast7 to again suit up for Joplin in 1906. The speedy 5’8”, 158-pounder paced the Western Association with 63 stolen bases.8 By August, it was rumored that Baerwald was to be sold to the Pacific Coast League’s Portland Beavers, but that never finalized.9 Rudy steered Joplin to a second-place finish, led by 32 wins from former foe Kid Durbin. Rudy left his Joplin post two days early to meet his ailing brother Charlie, a catcher for the Sioux City (Iowa) Soos of the Three-I League.10 Charlie had contracted malaria and suffered a facial paralysis,11 and was in the hospital. Still, Charlie mustered up the strength to watch the final game of the season from a carriage on the sidelines.12 Coincidentally, Charlie watched his visiting brother Rudy play third base as a fill-in for the Soos in their final series against Omaha and go 6-for-9 with four extra base hits.13 The brothers Baerwald then returned to Wausau, with Charlie never to play pro ball again before passing away in 1911.

The contract offered by Joplin for 1907 was not satisfactory to Baerwald, so he jumped Joplin and went to Butte, Montana, playing under the name of Jack Bell.14 When Joplin found out, they raised a big stink, and Butte was forced to purchase the player from Joplin. “Bell” hit .320 in 119 games for Butte, leading the Northwestern League with 145 runs.15

In August, the New York Highlanders bought “Bell” from Butte. The wording on his contract read “Rudolph Baerwald, professionally known as Jack Bell.”16 When Baerwald attempted to change his official name in the contract, manager Clark Griffith remarked:

Well, what difference does it make what name you play under so long as you get your money? ‘Bell’ is a good baseball name and an easy one for the sporting writers to remember.17

Bell, the new outfielder from Montana, made his debut after Frank] La Porte had been knocked out in the first inning Saturday. Bell’s work in his first game made a better impression than that of the other two new [rookies] … giving no ground for adverse criticism, it maybe Butte’s old center fielder will grab a regular position.18

Baerwald (listed as Bell in the box score) had been put into the game in right field at the beginning of the second inning, after La Porte had been removed for a pinch runner. He went one-for-four on the day, collecting his first knock off reliever Casey Patten.19 By his second day, the recruit was now recognized in the newspapers as Baerwald and made his first start in Philadelphia where he belted a triple off the Athletics’ Eddie Plank. His second start, the next day and again at Columbia Park, resulted in his only multiple-hit game. Baerwald made thirteen straight starts down the stretch for the floundering New Yorkers, slumping to .212 by season’s end. In 59 plate appearances, he walked exactly one time: against Joe Harris in his final game, an extra-inning tie against the Boston Americans.20

Baerwald was invited to New York’s training camp in 1908 but was shipped out to Newark. The Highlanders recalled him in late May, after 26 games, but only for the purpose of selling him to Class A Memphis. In 104 games at Memphis, he batted .285 with 35 stolen bases, leading the team in both categories, and was “an invaluable utility man … in both infield and outfield positions” for manager Charlie Babb.21 He even made a pitching appearance late in the season. From 1909 through 1911, Baerwald had three consecutive seasons at Memphis playing in over 120 games and hitting from .245 to .255. He stole 41 bases in 1911.

In March 1912, Rudy married Francis Wilmont in Chicago. Married life served him well, as he topped Memphis in hitting at .277. After the season, there was a complimentary write-up on Southern League stalwarts Baerwald, George Rohe of New Orleans, and Bill McGilvray of Birmingham, stating that the trio “are about as useful as any ginkerino drawing down the semi-monthly green in the minors today.”22 Further, it was remarked that “the three have put in a number of assiduous and profitable years to this glorious old section of Unc Samuel’s domain.”23 After the Southern League campaign, Rudy headed to California to play “Saturday and Sunday” winter ball, which he did the next winter as well.24

After another full season of playing outfield for Memphis, hitting .259, Baerwald bolted in 1914 for the Galveston Pirates of the Class B Texas League. Rudy ended second in the TL in batting average at .318 over 149 games for the fourth-place Pirates. He may have been “long in the tooth,” but Rudy could still mash, as the Houston Post waxed on:

Can that stuff on serving youth – lie of other years –
When you pull the “aged” gag, cut the sobs and tears;
Drape the funeral shrouds ye may for shoulders it can fit.
But ain’t old Rudy Baerwald here to show you how he can hit.”25

After his stellar 1914 campaign, Baerwald once again hitched an iron horse West to play winter ball for Calexico (California) of the independent Imperial Valley League, alongside teammates Irish Meusel and Irv Kantlehner. He was highly touted by Pacific Coast Leaguers who also played in the IVL, including Rudy’s old fellow Southern Association alum Jack Ryan. In January 1915, Baerwald’s signing by the San Francisco Seals of the Pacific Coast League was announced, although Seals’ owner Harry Berry had kept the signing under wraps for weeks to thwart efforts by the upstart Federal League to sign players.26 Rudy participated in camp at Boyes Springs, west of Napa, and made the squad, but barely stayed in the Bay Area long enough to make the Opening Day team photo.27 For the first six games, Rudy did not play:

Rudy is ostensibly a member of the Seals. He occupies about eighteen inches of space on the bench. But until Hen Berry can rustle up one more uniform Rudy is going to figure as excess baggage. In the tenth inning yesterday, Rudy had a chance to be a hero.28

In the Seals’ seventh game, Baerwald’s first plate appearance … never happened. Rudy was summoned by manager Harry Wolverton to pinch hit in the bottom of the 10 th inning of a scoreless tie against Venice. Unfortunately, his uniform was an outdated 1914 version, and Tigers’ manager Hap Hogan protested. Rudy “went grinning back to the bench in his useless and antiquated baseball suit;” infielder Chappy Charles, sent up to pinch-hit in Rudy’s stead, won the game with a single.29 After two official at bats in three games, Baerwald was released and sent back to Class B Galveston.30 Upon returning to Wisconsin in the fall, Rudy played with brother-in-law Jack Shea (who had married Rudy’s sister) for the semipro Hurley contingent in a league in the Upper Peninsula of northern Wisconsin and Michigan.31

Baerwald began with San Antonio for 1916, but “could not fall into his old stride” and was released.32 He signed with the Oklahoma City Senators of the Class D Western Association in June for his last pro season. He also became manager after Earl “Red” Snapp was fired. In August, Rudy was ejected and escorted off the premises by police for “using language unbecoming a gentleman” during a loss to Tulsa.33 He hit .299 over 95 games for Oklahoma City. After season’s end, he announced that he intended on “going to the copper fields in northern Arizona” where he had a good job lined up with a mining company while managing one of the teams.34 For the next four years he worked and played ball in the Copper Belt League. His 1917 draft registration listed him as a blue-eyed, grey-haired painter for Chino Copper. In November, 1918, his sister Lena, a 30-year-old teacher, sadly passed away after a lingering illness at his New Mexico home.35

In 1921, Rudy Baerwald became an umpire in the Western Canada League.36 For the rest of the decade he played and managed in various semi-pro leagues before returning to umpiring in the Arizona State and Arizona=Texas Leagues until he was released in 1937. Some managers believed “Rudy was getting too old to be efficient,” and he had notorious run-ins with El Paso Texans manager Jimmy Zinn. He also was prone to fining young players, “some of whom scarcely made $75 a month.”37 At the end of 1938, he put in to manage the El Paso team but New York Yankee scout Joe Devine acknowledged that the organization wanted a playing-manager, preferably a catcher, after Zinn’s release.38

In 1942, “60-year-old housepainter and [former] baseball umpire” Baerwald was considered for the post as manager of the Albuquerque Cardinals if they were to gain entrance into the West Texas-New Mexico League, but he was not chosen. Four years later, the “white-haired Rudy,” age 65, returned to the game ever so tangentially as the scoreboard operator for the local Albuquerque Dukes of the West Texas-New Mexico League, earning him no pay but giving him a season pass.39 He watched Albuquerque minor leagues games in the later years of his life, sitting with his wife in the grandstands, wearing “thick-lensed glasses and an eyeshade at the game to protect failing sight.”40

Rudy Baerwald died on July 28, 1955, at his home in Albuquerque, New Mexico, after spending “most of the spring and summer in a hospital.”41 He is buried at Sunset Memorial Park in Albuquerque. Albuquerque Journal sportswriter J.D. Kailer reminisced about how he, Baerwald, and a friend would hit fungoes religiously most every Saturday morning before “the trio would adjourn to [the friend’s] front porch, quench its thirst, then disband until next week.”42 Rudy remarked: “Baseball doesn’t owe me nuthin’ … I owe it a lot.” 43 In the end, Rudy Baerwald “gave his life to the game, and never regretted it.” 44

This bio was reviewed by Bill Lamb and Norman Macht and fact-checked by Evan Katz.

In addition to the sources shown in the notes, the author used Baseball-Reference.com and MyHeritage.com.