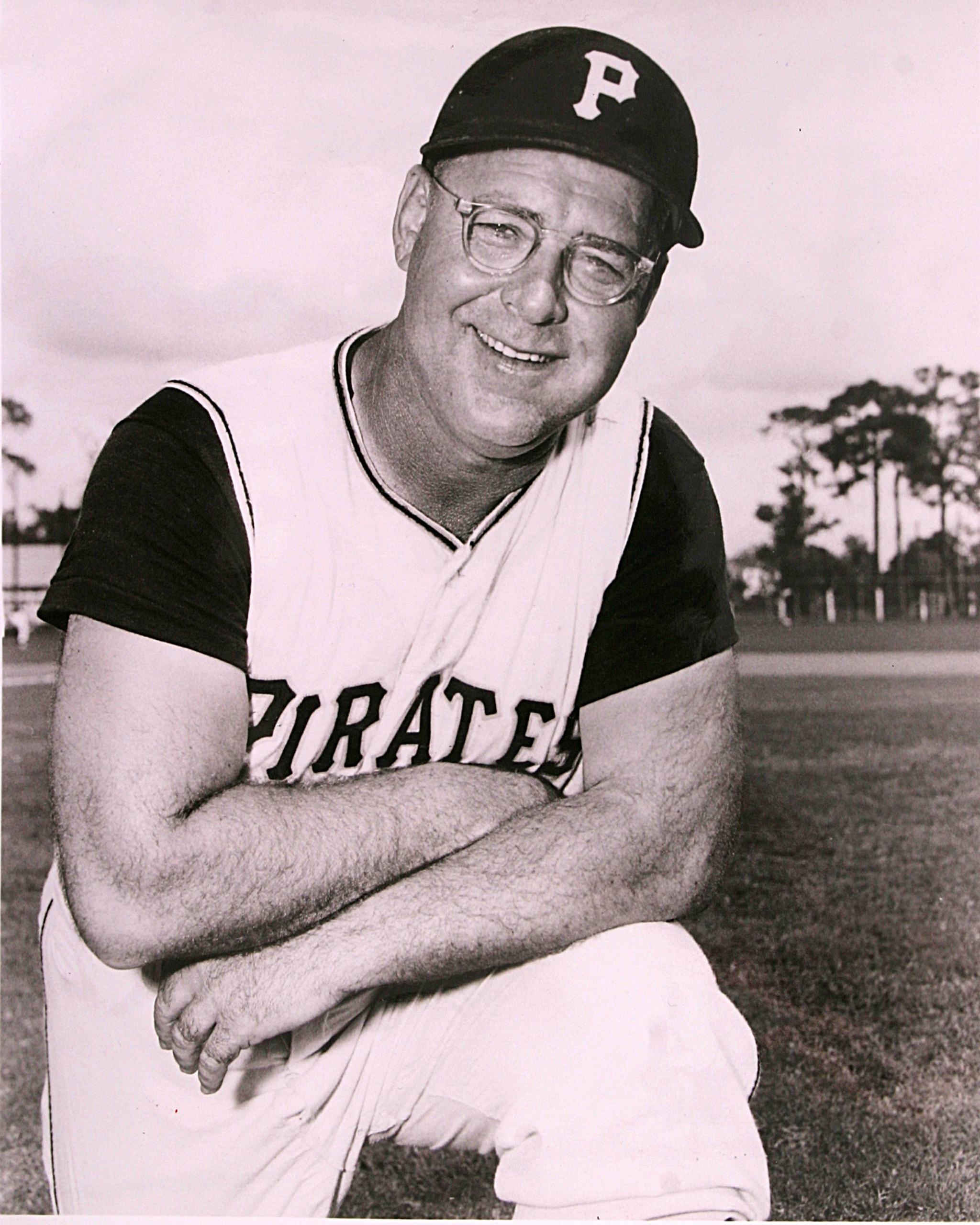 When Susie Finney Narron, wife of Sam Narron, would say, “God picked Sam up and set him in baseball,” Sam would respond, “I would have played for nothing.”1

It did not hurt that Sam became a protégé of Branch Rickey, a “Rickey man.”2 Narron was signed by the St. Louis Cardinals during Rickey’s tenure and spent parts of three seasons (1935, 1942, 1943) as a backup catcher on the team. After his playing career ended he became a coach, following Rickey to Brooklyn and then Pittsburgh, and was the Pirates’ bullpen coach from 1951 to 1964.

The youngest of five children, Narron was born on August 25, 1913, in Middlesex, North Carolina, to Troy and Rachel Narron. His father was 50 when he married Rachel, and she was 25. When Sam was born, his father was 65 and his closest sibling was 7 years old. The children were expected to work on their 75-acre family farm alongside their parents. It was there that Sam learned what hard work meant, and how much family members depended on one another for support.

Sam never graduated from high school, but he would join baseball teams and play anywhere he could. “Every crossroads had a team,” he told his son Samuel, who came to be known as “Rooster” and who insisted in an interview that his father’s given name was Young Sammie Woody Narron although birth records do not show it.3

Working in the mills in Rocky Mount and playing semipro baseball, Narron wanted to play professional baseball so badly that in 1934, at 20, he hitchhiked to Greensboro, North Carolina, to attend a baseball tryout. He was noticed by St. Louis Cardinals scouts who encouraged him to attend the Ray L. Doan All Star Baseball School in Hot Springs, Arkansas, but was told, “Be sure and bring your own uniform and equipment.” The school was financed by Rogers Hornsby and the WPA (Works Progress Administration, one of President Franklin D. Roosevelt’s New Deal initiatives), and instructors included Hornsby and Dizzy Dean.

A few years later, advertisements for the school listed Sam under the heading “A Few Players Who Made Good.”4

After tryouts each day, Narron would check the big board near the locker room to see if his number was listed, which meant that a pro team was interested in signing him to a contract. After he hit a home run one day, the Cardinals signed him.5 At first Narron was considered as a candidate for the Cardinals’ team at Greensboro of the Class B Piedmont League,6 but he was sent to Martinsville of the Class D Bi-State League (Virginia and North Carolina) as a third baseman. Playing in 78 games, Narron hit for a .365 average and tied for the team lead with ten home runs.

Narron returned to Doan’s school in early 1935 to gain more baseball knowledge and take advantage of advance instruction. Soon after, during Cardinals spring training, general manager Branch Rickey told Narron he should switch to catching since he was not known for his speed. It was the best advice Narron ever got. “If you want to learn to be a catcher, you’ll need to catch two hours in the morning and two hours in the afternoon,” Rickey told the 5-foot-10, 185-pounder.7

For 1935 Narron was assigned to Class D Albany, Georgia, where he played in 93 games, slugged 16 home runs, and played the infield and outfield as well as catcher. His .349 batting average was good enough to lead the Georgia-Florida League as he outdistanced the runner-up by 11 points.8

At the end of the season Narron was called up to the St. Louis Cardinals, a jump from Class D to the major-league level. His first at-bat, on September 15, 1935, was as a pinch-hitter for Dizzy Dean against Carl Hubbell of the New York Giants, and Narron grounded out to Hubbell on the first pitch.9 “I would have swung at it if he’d have thrown it to first base,” Narron would say.

At spring training with the Cardinals at Bradenton, Florida, in 1936, manager Frankie Frisch told his young players to find an experienced, regular member of the team and do what that player did to get into shape. Leaning on a bat behind the batting cage later that afternoon, Frisch turned to see Sam Narron standing there, leaning on his bat.

“What are you doing, standing around here?” the manager yelled in front of his players. “Didn’t I tell you to pick out some regular and do what he did?”

“Yes,” answered Narron politely, “and I picked you.”10

Narron underwent an emergency appendectomy a few days later.11 He was kept in the Cardinals’ camp, then was sent to Sacramento of the Pacific Coast League on April 20. Playing in only 57 games for the Solons in his weakened condition, Narron still was able to hone his catching skills in the bullpen for manager Bill Killefer under Rickey’s direction.

Narron spent 1937 at Asheville in the Piedmont League, playing in 116 games and batting .328. At Rochester in 1938, he batted .311. He returned to play for the Red Wings again in 1939 and batted .302. He also continued learning the skills of catching and handling pitchers, which became his greatest assets.

Narron was demoted to the Texas League’s Houston Buffaloes in 1940 and returned there in 1941. His batting average dipped below .300 in both seasons, but he caught in more games. Back at Rochester for the 1942 season, he shared catching duties with Sheriff Robinson and Ray Hayworth, then was called up to St. Louis as third-string catcher in June. He was with the team long enough to be voted a full $6,192.53 share of the victorious Cardinals’ World Series winnings.

Branch Rickey left the Cardinals organization and became the president and general manager of the Brooklyn Dodgers, a move that figured into Narron’s baseball future. He respected authority and was very loyal, and Rickey knew it.

Listed as the number four catcher on the 1943 Cardinals’ preseason roster, Narron remained on the roster for the entire season, though he got into only ten games and spent most of his time in the bullpen as the Cardinals won 105 games and cruised to the pennant. He had one at-bat in the World Series against the New York Yankees, grounding out as a pinch-hitter in Game Four. The Yankees won the Series in five games.

Soon after the World Series the Cardinals sent Narron to Columbus of the International League. The Boston Red Sox offered the Cardinals $50,000 for him, but club owner Sam Breadon wouldn’t sell him, so Narron retired to his tobacco farm. After the season Columbus traded him to St. Paul, a Dodgers farm club, and Narron “unretired.” He played in 90 games for the American Association club, mostly as a catcher. Despite a damaged finger, he knocked in 53 runs on a .253 average.

After playing in only two games for St. Paul at the beginning of the 1946 season, Narron was sold in May to Mobile, another Brooklyn farm club. Appearing in 39 games for the Southern Association club, he batted .261. In the winter of 1946-47 Narron was sold to Charleston of the South Atlantic League, where he was one of four catchers on the roster when spring training began in 1947. When the Cardinals released him, Narron simply went home.12 Later in the season he signed with the Smithfield-Selma Leafs in the Class D Tobacco State League, where he batted .385 in 37 games. He began the 1948 season as player-manager, but was fired as manager in midseason. Narron stayed with the team and batted .317 in 49 games.

At the Winter Meetings in December, Narron ran into Branch Rickey’s son, Branch, Jr., who asked him what he was doing there. “Looking for a job,” Narron said. The younger Rickey said to come to spring training and he would certainly be able to find something.13 Narron went to Brooklyn’s spring-training camp in Vero Beach, Florida. Branch Rickey saw him there and asked what he was doing there. “Looking for a job,” said Narron. “I don’t have anything for you to do,” Rickey said, but told him that as long as he was there he could warm up pitchers. As the team broke camp to head north, Rickey gave Narron the assignment that would lead to his future as a major-league coach: bullpen catcher.

In his bullpen role, Narron became known for getting a pitcher up to throw even before being signaled to do so by manager Burt Shotton. Lenny Yochim, a longtime scout, team executive, and adviser for the Pittsburgh Pirates, remembered that would “run” the pitchers, was the ball-keeper before games, and was counted on to catch during batting practice.14 At one point during the season one of the catchers at Triple-A Montreal was hurt, and Rickey sent Narron to the team to fill in. The 35-year-old Narron played in one game, batted four times, and hit a home run. Then he returned to the Dodgers.

The Dodgers won the National League pennant with a 97-57 record, but lost to the New York Yankees in five games in the World Series. In a move at odds with later practice, the players voted Narron only a half-share of their losing World Series money.

Narron remained with the Dodgers for the 1950 season as the club finished second to the Philadelphia Phillies Whiz Kids. In November Walter O’Malley bought out Rickey’s portion of the Dodgers ownership. Soon afterward Rickey became the general manager of the Pirates.15 He took Narron with him as the chief of the bullpen. Narron stayed with the Pirates for 14 seasons. He was the bullpen coach for four Pirates managers, Bill Meyer, Fred Haney, Bobby Bragan, and Danny Murtaugh. Narron’s experience was invaluable to each one, as he constantly offered advice on players and situations when asked (and oftentimes when not asked).

“Daddy always said, ‘I wasn’t the best, but I rubbed shoulders with the best,’ Rooster remembers. “Daddy was a coach players would go to, and in return for how popular he was, guys like General Manager Joe Brown were good to my dad”.16

Harry Walker replaced Danny Murtaugh as the Pirates’ manager after the 1964 season and decided not to keep any of Murtaugh’s coaches. Narron retired and went back to farming.17 His major-league playing career consisted of 24 games and 28 at-bats. He hit .286 with one run batted in. He participated in one World Series as a player and two as a coach, and coached in two All-Star Games. He was inducted into the Kinston (North Carolina) Professional Baseball Hall of Fame in 1988.

In the 1967 amateur draft, Sam’s son Rooster was selected as a catcher by the New York Mets in the ninth round of the secondary phase. Thirty-five years later, in 2002, his grandson, also named Sam, was drafted in the 15th round as a pitcher by the Texas Rangers.

In later years, Narron suffered with Alzheimer’s disease, and he died in Raleigh, North Carolina, on December 31, 1996, at the age of 83. He is buried in Antioch Baptist Cemetery in Johnson County, North Carolina.

Over the course of years since the mid-1930s, nine Narron family members have played or are playing Organized Baseball: Sam; his nephews Milt, Brandel, and John; his son Samuel (“Rooster”); his grandson Sam; and great-nephews Jerry and Johnny, and great-great nephew Connor. Jerry, a catcher like his great-uncle, has managed the Texas Rangers and Cincinnati Reds, and grandson Sam in 2012 was a pitching coach in the Washington Nationals organization.

1 Interviews with Sam “Rooster” Narron on June 28, 2009, and August 15 and16, 2010, at Herschel Greer Stadium, Nashville, Tennessee. Quotations from his father are as attributed by his son unless otherwise noted.