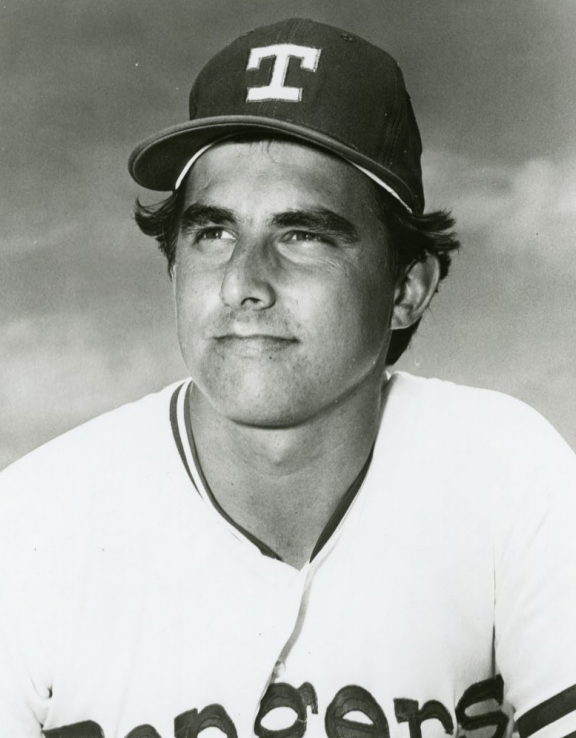 At the end of the 1972 season, rookie pitcher Steve Lawson’s stat line looked very promising. The Texas Rangers’ left-hander pitched 16 innings in 13 games, struck out 13, and had an ERA of 2.81. Not bad for a 21-year-old on a last-place team. Unfortunately, fate didn’t smile on Lawson and those numbers would remain his final ones in the major leagues.

Steven George Lawson was born on December 28, 1950 in Oakland, California, to Joseph and Barbara Lawson, and grew up in nearby San Lorenzo with his older brother, Jeff. Joseph, who owned a gas station in San Lorenzo, had pitched a season in Class-C ball in the Cincinnati Reds organization in 1939, then stayed in independent baseball until World War II began. Steve Lawson said he “played baseball from the time I was able to stand.”1 At San Lorenzo High School he was a standout basketball player but it was his performances on the pitching mound that began to draw the attention of professional scouts. San Lorenzo baseball coach Howie Thompson said, “Steve is the best pitcher I’ll ever have the pleasure of coaching.”2

On June 5, 1969, shortly after graduation, Lawson got a call from the Oakland Athletics; he had been selected in the third round of the amateur draft. Lawson turned down a full baseball scholarship from Arizona State University when he was signed by Oakland scout Eli Grba for a “substantial bonus.”3 In an organization with a deep pool of pitching talent that included the likes of Catfish Hunter, Blue Moon Odom, Rollie Fingers, and Vida Blue, competition would be tough. “When called by Oakland,” recalled Lawson in 2015, “I still remember their statement that I needed to be good or I would be traded.”

After signing, Lawson was sent to Pasco, Washington, to join the Tri-City A’s of the short-season Northwest League. There, his first professional coaching came from manager Billy Herman, the former National League infielder who was inducted into the Baseball Hall of Fame in 1975.) Lawson pitched in 13 games with 11 starts that rookie season. His won-lost record was only 1-6 but with 63 strikeouts in 63 innings, the Athletics’ management must have been reasonably satisfied with their draft choice.

In 1970, the A’s affiliate in the Northwest League was located in Coos Bay-North Bend, Oregon, and Lawson was assigned there. Led by manager Harry Bright, the team had a strong pitching rotation that also included future major leaguers Glenn Abbott and Mike Barlow. Lawson contributed with a 3-4 record, a 3.68 ERA, and 71 strikeouts in 66 innings. He even found success at the plate, hitting .333 and contributing 8 RBIs.4

In 1971, Lawson followed manager Harry Bright to the Midwest League and the Burlington Bees. It proved to be his breakout season; Lawson started 14 games and went 7-2 with a 3.07 ERA and seven complete games. The performance earned him a big promotion and in 1972, he began the season with the Iowa Oaks of the Triple-A American Association. In 20 starts, Lawson was 7-9 with 106 strikeouts in 122 innings.

On July 26 of that season, Lawson became the “player to be named later” in a deal made between the Athletics and the Texas Rangers six days earlier. Oakland had sent rookie second baseman Vic Harris and veteran utility infielder Marty Martinez to the Texas Rangers for infielder Ted Kubiak and veteran first baseman Don Mincher. The A’s owed the Rangers one more player in the deal and the Rangers selected Lawson.

Instead of being sent to Denver, the Rangers’ Triple-A club, as expected, Lawson was told to report directly to Arlington. Given uniform number 24, he took a spot on the bench in the bullpen. “It was fantastic,” said Lawson in 2015. “Ted Williams was the coach and I was thrilled to be realizing my dreams.”

On August 3, in the fifth inning of a game against the Minnesota Twins, the call came in to the bullpen: Lawson was to take over for starter Dick Bosman. With the bases loaded and one out, it was not an enviable situation for a major-league debut. Lawson proceeded to give up singles to Rich Reese and Bobby Darwin, which cleared the bases and put the Twins up 6-0. He got out of the inning by getting both Charlie Manuel and Danny Thompson to ground into force outs at second base.

The sixth inning went much smoother; catcher Glen Borgmann flied out to left, then pitcher Jim Perry and outfielder Cesar Tovar both grounded out to short. Bill Gogolewski took over in the seventh but the Twins were on a roll and went on to win 9-1.

Two days later, in Chicago, Lawson appeared in his second game. In a much lower pressure situation than his debut, he took over for Rich Hand in the eighth with one on and one out but the Rangers up 11-4. Lawson struck out pinch-hitter Tom Egan and got Luis Alvarado to ground to third, resulting in a force out of Mike Andrews at second.

In the ninth, Lawson made what would be the only plate appearance of his major-league career. Facing fellow rookie Jim Geddes, he hit an infield single to third. He advanced to second on a walk to Toby Harrah but a popup to short by Ted Ford ended Lawson’s sole adventure on the basepaths.

Back on the mound in the bottom of the ninth, Lawson gave up back-to-back singles to Buddy Bradford and Pat Kelly, followed by a walk to Jay Johnstone. Despite the bases being loaded with no outs, Ted Williams stuck with Lawson, perhaps wanting to see how the rookie would handle the situation. The next batter, Rick Reichardt, hit a grounder that resulted in a force out at second but Bradford scored. Up next was All-Star outfielder Carlos May. Lawson ended the rally and the game – and was credited with the save – when he got May to ground into a double play.

On Friday, September 15, Steve Lawson had the opportunity to pitch against his former organization in front of a hometown crowd. In the eighth inning he got the call to take the mound against the Athletics at Oakland-Alameda County Coliseum. With a 10-0 lead, the eventual World Series champs had the game well in hand but it was still a memorable event for the Bay Area native. “I definitely remembered that game,” recalled Larson. “I was glad to be in my hometown and celebrating my wife Sandi’s birthday.”

The outing started well; Larry Haney grounded back to the mound and Lawson threw him out at first. Sal Bando was up next and drew a walk, which was followed by a single from Ted Kubiak. Pitcher Ken Holtzman (who tossed a complete game) grounded out but the runners advanced. Shortstop Tim Cullen then cracked a single to center that scored both runners. Lawson then got Angel Mangual to ground to short for a force out of Cullen at second.

Lawson’s last major-league appearance came on October 4. With the Rangers facing the Royals in Kansas City on the last day of the season, Lawson got the call to the mound in the seventh with the home team up 4-0. Steve Hovley led off with a single but Lawson struck out Jim Wohlford, then retired Amos Otis and John Mayberry with fly outs. In the eighth, Lawson remained on the mound. After a walk to Lou Piniella and a single to Ed Kirkpatrick, however, he was pulled in favor of Jim Panther. The Rangers failed to mount a comeback and the Royals won, 4-0.

At the end of spring training in 1973, Lawson was assigned to the Rangers’ Triple-A affiliate in Spokane. A shoulder injury soon began to take a toll. He started only 10 games that season and pitched 54 innings; a 1-8 record and 7.50 ERA were certainly not reflective of the promise Lawson had shown the previous season.

Despite his struggles of the previous season, the Rangers stuck with Lawson and sent him back to Spokane in 1974. He continued to struggle with shoulder problems and never regained his touch. In 17 games, Lawson was 3-8 with a 5.40 ERA.

“Sports medicine was an infant compared to today’s options,” said Lawson in 2015. “I felt uncertain about my injury and elected to retire from professional baseball. It was a good decision.”

Lawson had married his wife, Sandi, in 1971 and the couple eventually settled in Oregon.

“I started my business called Contract Sweepers,” recalled Lawson of the company he sold in 2005. With its sweeping equipment the company cleaned shopping-center parking lots. “It was something I knew nothing about until my cousin decided he did not want to keep the business. I bought it and it worked out for everyone, thus the reason we now live in Oregon. We thought we’d try living in Oregon and have never looked back.”

In 2015 Lawson said he spent much of his spare time golfing and fishing but still enjoyed watching baseball.

Though his playing career didn’t pan out as he would have hoped, Lawson is still remembered for his prowess on the mound. When San Lorenzo High School established an athletic Hall of Fame in 2006, Lawson was among the inaugural inductees. He was the only baseball player so honored.5

Said Sandi Lawson, “Steve was fortunate to play professional baseball because of his skill level. He loved playing but was humble and didn’t say much. He was just having fun.”

The author relied heavily on email correspondence with Steve and Sandi Lawson in December 2015 and data provided by Baseball-Reference.com.

1 Author email correspondence with Steve and Sandi Lawson, December 2015. All direct quotations are from this correspondence, unless otherwise noted.