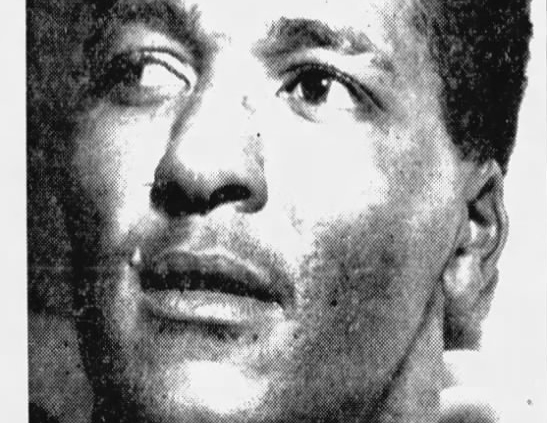 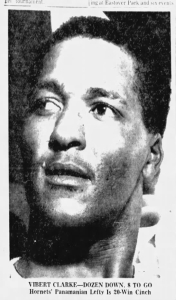 A five-year veteran of the Negro Leagues, Ernesto Vibert Clarke was a one-hit wonder who followed the adage If at first you don’t succeed, try, try again. The phrase may be a cliché, but in Clarke’s case it’s an accurate one.

The native of Panama recorded his first and only hit in the major leagues while part of a Washington Senators September call-up. The day — September 10, 1955 — marked a series of firsts for the left-handed hurler. The game was Clarke’s first start in the major leagues and his first appearance in front of his home fans at Washington’s Griffith Stadium. The club also claimed him as being the first to break the franchise’s color line.1

Clarke, at 6 feet tall and around 165 pounds, was known for having a “good fastball, a pretty good curve,” and not so good command.2 Walking batters was an issue: He gave up nearly as many walks (14) as hits (17) in 21⅓ innings pitched in seven major-league games.

Most modern records say that Clarke was born on June 8, 1928, in Colon, Panama.3 However, both the 1930 and 1940 federal censuses recorded in mid-April have Clarke born in 1922 or 1923 depending upon whether the census age indicated his actual birth year or the one he was going to celebrate in June. His father, Charles, was born in Barbados, while his mother, Annie, was born in Jamaica, and moved to the Panama Canal Zone around the time of Vibert’s birth. In 1940 Vibert was recorded as being 17 years of age and employed as a dock worker; it said he had attended school through the seventh grade, which would support a birthdate of 1922 or 1923 and not 1928.4 A 1948 article on the Cleveland Buckeyes Negro League team published the week of his birthday noted Clarke was 24 years old the previous season, making a birth year of 1923 or 1924.5 As the Cleveland Buckeyes team story appears accurate, Clarke was either 32 or 33 years old and not 27 when he made his major-league debut in the summer of 1955.

In 1946 Clarke was 7-7 with the Negro American League Buckeyes and then became the ace of the staff in 1947, posting a record of either 11-2 or 13-2 and helping to capture the Negro American League pennant.6 In 1948 the club failed to win the pennant and Clarke wasn’t as effective that season, posting a mark of 8-9. In that season Clarke had the honor of giving up what is now — with the December 2020 determination by Major League Baseball that the NAL would be considered a major league — Willie Mays’s first major-league homer, as the teen was an outfielder for the Birmingham Barons. He followed up in 1949 with a 4-10 record and a 4.50 ERA with the Buckeyes, now relocated to Louisville. Clarke pitched for the Memphis Red Sox from 1950 through 1953 and posted a much improved 13-10 and 2.98 ERA in his first season with the Tennessee club.7

When not stateside for the summer, Clarke played in his native Panama 10 consecutive winter seasons starting in 1945, the year before he signed with the Buckeyes. Clarke posted a 4-3 record and was apparently impressive enough to make the trek north to Cleveland in 1946. He posted only winning records in four of the 10 seasons in Panama winter ball.8 He pitched a no-hitter in the 1947-48 winter and his best season was in 1950 (14-4, 2.87 ERA) with the Super Cola squad. By 1952 he held the Panamanian Winter League career wins record at 48.9 In 1952, Clarke got himself into trouble as he attacked Carta Vieja player-manager Al Kubski after a game on February 7. Kubski was hospitalized with head injuries; Clarke was arrested and immediately suspended from the league by President Raul Arango.10

The next season, 1952-1953, possibly still under suspension, Clarke apparently spent some time in the Mexican League. In 1954 he signed with the Pampa (Texas) Oilers of the Class-C West Texas-New Mexico League. Clarke had a fine summer, being named to both the midseason and end-of-the-year all-star teams. Clarke posted an 18-7 record and struck out 234 batters in 232 innings (he walked nearly 100). He completed 19 of 23 games started, and batted .355.11 The Oilers won the pennant and the league playoffs.12

In early December it was reported that Pampa had sold Clarke to the Senators.13 During spring training in 1955, Clarke was assigned to Charlotte in the Class-A Sally League. He was 16-12, winning nearly one-third of 54-86 Charlotte’s victories. Clarke was voted the team’s most valuable player and was given a wristwatch.14 Clarke and catcher Steve Korcheck were promoted to the Senators.

They were joining a woefully inept Senators team, led by manager Charlie Dressen. The best player on the last-place team (53-101) might have been 37-year-old first baseman Mickey Vernon, while none of the pitchers finished with a winning record. About a week before the call-ups, Dressen told sportswriters, “I don’t have to point out that we don’t have enough solid all-around players on the squad,” and called it a “sad sack situation.”15 So, Clarke’s lively arm offered the possibility of a welcome addition to this lackluster squad.

Clark made his major-league pitching debut on September 4, 1955 in relief against the New York Yankees at Yankee Stadium. He was greeted by Andy Carey’s triple, got Whitey Ford out on a comebacker to the mound, and then saw Hank Bauer hit an RBI single to right field. Clarke then gave up a single to Gil McDougald before striking out Billy Martin and getting Yogi Berra to fly out to right field. The Senators failed to score in the top half of the ninth, losing 8-3. Clarke didn’t bat in the game.

Clarke appeared both on the mound and at the plate in the first game of a doubleheader against Boston at Fenway Park the next day. Entering in the fourth inning in relief of Camilo Pascual, Clarke finished the contest and gave up two runs on Jimmy Piersall’s home run, allowed three more hits, and walked six Red Sox as Washington dropped a 10-2 contest. He got his first major-league at-bat, hitting a fly ball off Tom Brewer in the seventh inning that was caught by Piersall in center field.

On September 10, before a slim crowd of 2,551 at Griffith Stadium, Clarke made his first major-league start, against the Kansas City Athletics. The Senators reached base 12 times against Johnny Gray in less than five innings, while the rookie Clarke cruised along, allowing no runs through five innings. In the Senators’ fourth, after Gray loaded the bases with a walk to Roy Sievers, a single by newcomer Korcheck, and a walk to Jose Valdivielso, Clarke came to the plate. With an opportunity to help his cause, he struck out. Gray then walked Eddie Yost and forced in a run before he retired the final two batters of the inning.

In the bottom of the fifth, Washington loaded the bases again. Vernon reached base on an infield error, Sievers singled, and Valdivielso wrangled another walk from Gray. This time, with two outs, the Panamanian connected on a pitch and drove the ball to left field, clearing the bases. Ray Herbert relieved Gray and got the final out. Clarke ended the inning with his only major-league hit, three RBIs, and a 4-0 lead.

Gus Zernial connected for a solo homer to end Clarke’s shutout bid in the sixth inning, but the lefty set down the Athletics in order in the seventh. The Senators got another run in their seventh and led 5-1 in the eighth, when it all unraveled for the rookie. He walked the first three batters. Chuck Stobbs came on to relieve, and five batters later the score was tied, 5-5. To make matters worse, after the Senators retook the lead in the bottom of the eighth, Pedro Ramos gave up Zernial’s second home run of the day, a three-run shot, to hand Kansas City an 8-6 lead. With two outs in the bottom of the ninth, the Senators again loaded the bases, but couldn’t score. Clarke’s pitching and hitting heroics were all for naught.

Clark started one more time, on the 16th against Baltimore, and didn’t make it out of the fourth inning. His short stint allowed him to relieve the next day, when he gave up Brooks Robinson’s second major-league hit and first RBI during his big-league debut.16 Clarke opened the inning by getting two fly-ball outs, before a double and a walk gave Robinson his chance to shine. Clarke was saved from further damage when his Charlotte teammate and catcher, Korcheck, combined with third basemen Eddie Yost to pick off Hal Smith at third.

Clarke’s final game in the majors was on September 24, against Baltimore at Griffith Stadium. It was his best appearance in the majors: He pitched a perfect last three innings.

Near the end of spring training in 1956, the Senators sent Clarke to Charlotte.17 On March 31 he was suspended for three days by manager Rollie Hemsley, whose drill-sergeant attitude was apparently not to Clarke’s liking. Hemsley had set an 11 P.M. curfew and took the ballplayers’ car keys so they could log extra miles when walking to the ballpark. Clarke failed to show for a practice and lacked “the kind of hustle Hemsley demands.” Hemsley announced, “There will be no prima donnas in camp, even if they can win a pennant singlehandedly.”18 Clarke’s 1956 season with Charlotte was not good. He dropped to 3-10 by mid-June and was then sent to Louisville where he was 4-10. The following year he was 7-12 with three minor-league teams. He returned to Panama, where he had much improved numbers, but not enough to generate a return trip to the majors.19

Nearly a decade after his major-league debut, The Sporting News ran an article about Clarke pitching a three-hit shutout for his Cerveza Balboa club on December 17, 1964. The article mentioned Clarke’s age as 35, giving him another birth year, 1930.20

Ernesto Vibert Clarke ended his career with no decisions on the mound and 1-for-6 at the plate. His ERA was 4.64 in 21⅓ innings, with 14 walks and 9 strikeouts. He had two bases-loaded chances in the same game and after failing in the first try, was successful in his second and proved that following a time-worn cliché was a good idea.

Clarke died in Cristobal, Panama, on June 14, 1970. Information on his later years has eluded researchers.

3 As self-reported by Clarke. US Baseball Questionnaire, William J. Weiss, SABR. Though the nickname “Webbo” has been associated with Clarke, it has not been possible to locate even one newspaper article that mentioned the nickname. Colon was in the Panama Canal Zone, a US-administered 10-mile-wide strip of territory straddling the Panama Canal. It was turned over to Panama in 1979.