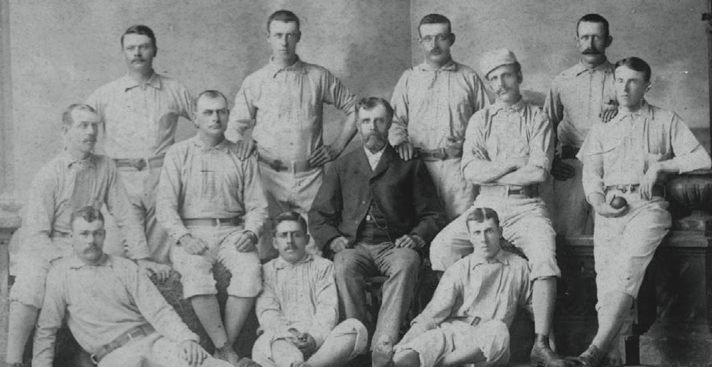 Competing in the National League from 1878 to 1885, the Providence ballclub won the championship twice and posted a winning record seven times during its eight-year tenure in the league. After struggling financially its first four years, the club became profitable in 1882. However, persistent stockholder pressure to disband the club eventually led to its exit from the National League after the 1885 season.

The Providence Base Ball Association was a stock company organized in January of 1878, with John D. Thurston named as president.1 Thurston, a lawyer, marshaled a bill through the Rhode Island legislature in May of 1878 that granted the ballclub a corporate charter.2 The club initially raised $6,200 in capital through the public sale of stock priced at $25 a share.3

In addition to Thurston as president, Henry A. Church was named vice president, Philip Case was the treasurer, and Henry B. Winship was the secretary.4 At the club’s inception, the five-man board of directors consisted of Church, Henry T. Root, H.S. Bloodgood, M.B. Read, and J.C. Knowles.5 By June the directors were Root, Bloodgood, Winship, Thurston, and Robert Morrow.6

Root and Winship were the directors who handled much of the operational work of the new ballclub. Both were successful businessmen with stores in downtown Providence. Root owned a company that sold stoves, furnaces, and kitchen furnishings, while Winship was a partner at the clothing store J.B. Barnaby & Company.7 Root and Winship, though, were “about as much unlike as two men could be,” as “Root says but little during a meeting” but reviews details with “rigid scrutiny,” while Winship is “full of nervous energy” and is “a story-teller and conversationalist.”8 Their duties were arranged accordingly, with Root having “general supervision of the grounds” and Winship building relationships in “arranging for excursions by the different railroads, advertising, and printing.”9

Much of the original capital was spent building a grandstand on a leased six-acre parcel of land on Messer Street, on the west side of the city, where the club conducted the team’s home games. Due to these expenses, “the first year the club lost [money] quite heavily.”10 It was a financial hole that the Providence club needed another three years to completely emerge from.

Root was elected president and treasurer for 1879, with Winship continuing his role as secretary.11 Root ascended to the club’s top officer position after he secured George Wright from the Boston ballclub to be the Providence manager in 1879. Wright, proprietor of the sporting-goods firm Wright & Ditson, was a seasoned leader as well as an expert ballplayer, whom Root expected to help reverse the club’s financial woes.

Under the leadership of Wright, Providence won the championship of the National League during the 1879 season, when “considerable money was made, which was used in liquidating the [debt] claims of the former year.”12 The New York Clipper reported the club’s net profit to be about $1,500.13

As a reward for their profitable stewardship, Root and Winship were re-elected president and secretary, respectively, for 1880.14 Wright, however, did not return as manager. The Providence directors pressured Wright to accept the same salary, since his employment mobility within the league had been extinguished by the league’s newly enacted “reserve list.”15 Wright retired from baseball to work full-time in his sporting-goods business.

Despite finishing in second place in 1880, Providence lost money. The club’s debt level was reported to be $3,350, after the ballplayers agreed to forgo a portion of their October paychecks.16 For the first time the directors discussed disbanding the club as they considered “whether the grounds were to be sold for what they could bring, and abandon the game, or to square up accounts and pay the $1,350 owed outside of the amount due to the players.”17 The directors sought to retire this debt by selling the remaining $3,800 in authorized stock and seeking subscriptions from existing stockholders.

The club continued to founder financially in 1881 under the leadership of Root, finishing the season with $1,390 in debt.18 To eliminate the debt, the directors enacted a $10 subscription per stockholder. While the directors had initially voted to field a team for the 1882 season, they threatened “to withdraw the club from the league” a month later “unless the balance [of stockholder subscriptions] is forthcoming on or before Saturday.”19 Root resigned as president and was quietly replaced by Winship, who instituted a policy that “business and not sentiment will hereafter prevail in the Providence management.”20 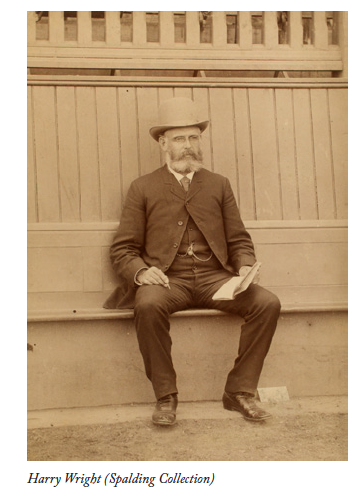 Providence hired Harry Wright to manage the team for the 1882 season. When he piloted the team to a second-place finish, the club turned a profit of $4,624, with receipts of $41,217 offset by expenses of $36,593.21 For the first time since 1879, the club finished the season with a cash surplus of $3,000 after paying its outstanding bills. Winship was re-elected president for 1883, with Mead as treasurer and a board of directors consisting of Bloodgood, Thurston, Thomas C. Peckham, Newton Earle, and C. Fred Crawford.22

Wright returned for the 1883 season, but he quit at season-end due to the directors’ contentious arguments over whether to continue the team in 1884. After ending the season with $9,000 in the treasury (apparently enhanced by a $6,000 profit), Winship pushed the directors to approve the payment of a 100 percent dividend, based on the rationale of “having taken the association when it was in debt and had brought it up to its present prosperous state.”23 The dividend payment on the $10,000 of stock outstanding would have depleted the club’s cash on hand and pushed the club back into debt, forcing the directors to either field an uncompetitive team or withdraw from the league.

Winship and the directors, horse-racing devotees more than baseball fans, planned to use the dividend payment to buy a stake in Narragansett Park, the local race track, “preferring to deal with a sport whose four-legged athletes were not as fractious and self-serving as professional ballplayers.”24 When the stockholders balked at the dividend vote, Winship resigned as president and a new board of directors was installed, consisting of George H. Flint, William T. Smith, J. Edward “Ned” Allen, Henry Root (returning), and Peckham (the only holdover).25 Flint was initially elected president, but he resigned a week later (replaced as director by Crawford) and Root once again became president.26 Allen assumed the role of business manager.

Allen hired Frank Bancroft away from the Cleveland club for an extravagant $2,500 salary to manage the Providence team for the 1884 season. Bancroft soon had second thoughts when he discovered “raw egos had divided the club into bickering factions and know-it-all stockholders were taking sides, angrily squabbling over how to best manage the team.”27 Bancroft had matters largely under control and the team into first place by July. Then both pitchers, Charlie Sweeney and Charlie Radbourn, quit and turmoil struck the team. The directors once again considered disbanding the club, as $17,000 reportedly was in the club’s treasury.28

Bancroft persuaded Allen and Root to keep the team in the league, then persuaded Radbourn to stay and pitch all the remaining games in the 1884 season. The inducements for Radbourn were an increased salary and a promise for the club to release him after the season so that he could freely negotiate with other ballclubs.29 This deal set the stage for “Old Hoss” Radbourn to win 60 games in 1884 and propel Providence to the championship of the National League. Providence then defeated the American Association champion New York Metropolitans in the first-ever World Series. Allen presented Radbourn with two alternatives: to take a release or to fill in whatever salary he wanted on an 1885 contract to play for Providence; “to Allen’s amazement, he filled in a figure for the new season and tore up the release.”30

In January of 1885, the Providence club announced that “the season had been prosperous,” the directors had voted a 10 percent dividend payment to stockholders, Root was re-elected president, and the existing board of directors would return (Allen, Crawford, Peckham, Smith, and S. Tillman White).31 However, things remained fractious among stockholders. Root resigned as president in July of 1885, and the directors elected Allen to be his successor.32 By September there were widespread rumors that Providence (and Buffalo) would be expelled from the National League.

In November of 1885, Allen negotiated a deal with Arthur Soden, the president of the Boston ballclub, to purchase the Providence team (basically the contracts of the Providence ballplayers, not the stock in the club).33 This was a personal investment by Soden (not on behalf of the Boston club), largely to acquire the rights to pitcher Radbourn, but also to encourage Providence to drop out of the National League. Soden reportedly paid $6,600, which was said to be enough (in combination with the cash in the club’s treasury) to pay off the stockholders at 100 percent of their original investment.34 Soden officially withdrew Providence from the league on December 3, 1885.35

Actually, the Soden payment enabled the Providence club to give its stockholders a small profit. In mid-December of 1885, the board of directors declared a dividend equal to 110 percent of the capital stock of ballclub, which was funded by the $6,600 from Soden and $4,400 from the club’s treasury.36 After that $11,000 payment to retire the stock, the remaining $3,000 in the club’s treasury was designated for the operation of the minor-league team and put into the hands of the trustees of the land underneath the Messer Street Grounds.37

2 “An Act to Incorporate the Providence Base Ball Association,” Acts and Resolves Passed by the General Assembly of the State of Rhode Island and Providence Plantations at the May Session, 1878 (Providence: E.L. Freeman & Company, 1878), 29-30.

28 “Ball Players Who Won’t Play; Reasons Which May Lead to the Disbandment of the Providence Club,” New York Times, July 23, 1884.

37 Ibid. The land was owned by Josiah Chapin, but when he was delinquent on his mortgage payments, the land was put into trust, with Thomas C. Greene as trustee. Legal disputes reached the state Supreme Court in 1885. “Franklin Institution for Savings, by its Receiver, vs. The People’s Savings Bank, et al.” Reports of Cases Argued and Determined in the Supreme Court of Rhode Island, volume 16 (Boston: Houghton Mifflin, 1885), 632-634.