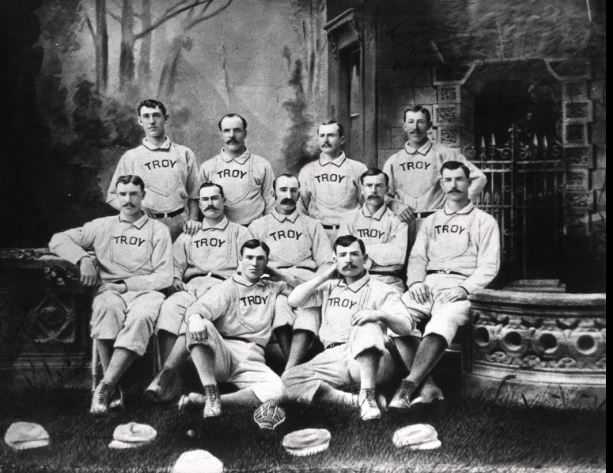 As one of the early small-market franchises in the National League, the Troy, New York, ballclub had a short tenure in the league, but it has retained a solid place in National League history for how the club entered the league in 1879 and how it was forced to exit in 1882.

The Troy Base Ball Association was a stock company organized in January 1879, which raised $6,400 in stock subscriptions from the local business community.1 Seven men were named to the club’s board of directors: Gardner Earl, James McQuide, Charles Dauchy, Charles DeFreest, Francis Mann Jr., LeGrand Cramer, and Fred Draper.2 Earl was named president, Dauchy was treasurer, and DeFreest was secretary.3 Earl was co-owner of Earl & Wilson, one of several shirt-collar manufacturers in Troy, which was known as the collar city.4 DeFreest was the editor of the Troy Daily Times, which ensured good publicity, while Dauchy owned a company that wholesaled paints and oils.5

Troy was admitted to the National League for the 1879 season as an expansion team, when the league enlarged from six to eight teams. League President William Hulbert lobbied to add Troy to the league, because Troy advanced “Hulbert’s strategy of preempting the formation of competing leagues by absorbing their potentially strongest members.”6 As an independent minor-league club in 1878, the Troy club had shown that it could be a threat, especially after it was admitted to the International Association for the 1879 season.7

However, Troy was far short of the league’s constitutional requirement for a city’s population to be at least 75,000 people. Troy was then the country’s 29th largest city, with a recorded population of 56,747 people in the 1880 federal census. Hulbert had to twist the arms of the other club owners in the league to exempt Troy from this provision.

After finishing in last place in the league standings for 1879, the Troy club posted a $1,800 loss because stock subscriptions only partially offset the nearly $8,000 difference between gate receipts and expenses.8 Earl, Dauchy, and DeFreest continued as club officers for the 1880 season, while six of the seven directors returned, with the sole management change being Albert L. Hotchkin replacing Cramer.9 Hotchkin owned a furniture store and also served as the county sheriff.10

Hotchkin replaced Earl as club president for the 1881 season.12 While the team finished in fifth place in the standings, financial performance was unclear, as the Troy Daily Times, edited by club secretary DeFreest, had stopped publishing that information.

When Hotchkin became a director of the National League for the 1882 season, Mann, a club director the previous three years, succeeded him as club president, although Hotchkin, still one of the seven Troy directors, was the named recipient for all club correspondence.13 Mann was a lawyer from a prominent Troy family.14 The club spent $5,000 to build a grandstand at a new ball grounds in West Troy, which was closer to the Troy business district than the former grounds in suburban Lansingburgh.15 At some point during the 1882 season, Hotchkin replaced Mann as president, since Hotchkin was the officer who presided over the ballclub during its eviction proceedings from the National League.

The ballclub stockholders appear to never have received a return on their sporting investment. In its requiem for the Troy ballclub published in December of 1882, the Troy Daily Times disclosed that the club had spent $75,000 over its four-year existence and “receipts fell considerably below that amount.”16 The stock also appears to have become worthless once the ballclub was summarily dismissed from the league after its next-to-last-place finish for the 1882 season.

When Hulbert died prior to the 1882 season, the Troy club no longer had a staunch defender in league politics to retain a franchise from a city that was obviously too small to support major-league baseball. On September 25, after Hotchkin left a special meeting of the National League club owners, the other club owners secretly voted to evict Troy from the league (along with the Worcester, Massachusetts, club) as part of a strategy to add large-market clubs in New York City and Philadelphia.17

Two weeks later Hotchkin tried to rally support from the Troy ballplayers to sign contracts for the 1883 season to play for a Troy team in the American Association. “President Hotchkin interrogated the players as to their intentions … but it was evident at this point that the directors had been ‘left’ by the boys,” the Troy Daily Times reported.18 Most of the star players, such as Buck Ewing and Tim Keefe, had already agreed to play for the newly added New York City team, as the National League did not enforce the informal reserve list that ostensibly precluded the mobility of Troy’s best players.

Hotchkin attended the league meeting in December of 1882 when Troy was officially ousted from the National League. In exchange for an informal agreement for the league teams to play exhibition games in Troy during the 1883 season, Hotchkin did not contest Troy’s dismissal from the league.19 As a parting gift, the league granted Troy an honorary, albeit worthless, lifetime membership in the league.20

CHARLIE BEVIS is the author of seven books on baseball history, most recently “Red Sox vs. Braves in Boston: The Battle for Fans’ Hearts, 1901–1952” (McFarland, 2017). A member of SABR since 1984, he has contributed more than five dozen biographies to the SABR BioProject as well as several to SABR books. He is an adjunct professor of English at Rivier University in Nashua, New Hampshire.

17 Melville, Early Baseball and the Rise of the National League, 135.

19 “Why Troy Resigned From the League.”