SABR 23 in San Diego: A Retrospective on the 1993 SABR Convention

Holding the 1993 SABR convention wasn’t even my idea.

In early fall the SABR Bulletin put out a call for interest in hosting the 1993 convention. This time I was asked by a local member about hosting specifically the 1993 convention, since that year was the 75th anniversary of Ted Williams’ birth, and thus I was compelled to respond to the national organization that there was interest. I left a phone message by their deadline for inquiries.

The national office requested that I submit a proposal. I queried the San Diego Convention and Visitors Bureau (CONVIS), which sent me a book with various lodging facilities. The other region that had expressed interest was West Palm Beach. The anniversary of Williams’ birth, augmented by the situation that 1993 would be the 25th year of the Major League Padres, had been my planned selling point. Now I had to be somewhat competitive. Fortunately, CONVIS had average humidity statistics for the summer months as well as temperature and rainfall averages.

With little guidance on writing a SABR proposal, I divided it into seven chapters. The first was an introduction noting the anniversaries, adding the 50th anniversary of Al Olsen’s phantom pitching appearance with Red Sox. The second chapter covered San Diego. The third chapter covered facilities, including 1991 rates for various hotels as well as transportation, library, sports facilities around San Diego. Chapter 4 emphasized attractions within a few hours’ drive of San Diego. Chapter 5 talked about the convention ideas. Chapter 6 described San Diego’s SABR chapter and those who I had secured as willing to help out. Chapter 7 was an acknowledgment. Ironically the proposal for SABR XXIII ended up being 23 pages.

What wasn’t in the proposal was the disarray of the chapter. Our vice-president had died in January 1989, and still-unresolved issues involving his research material kept us too busy to have a regional meeting that year. The next year we wanted to have a regional meeting in Yuma, where the Padres had spring training, but the baseball strike that year scuttled that one.

Fortunately, I knew many local members from previous meetings, all of whom volunteered to help with the convention and gave a couple of paragraphs about themselves for the proposal, and a couple of new members were brought to my attention from the Cleveland office. 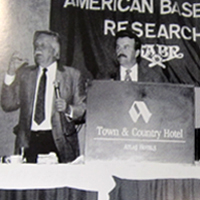 The other element of chaos surrounding the proposal was my personal life. With a marriage as well as a move to a new house and a one-week honeymoon in New Orleans, I didn’t even start writing the proposal until the week I had to mail it. And with my car out I had limited time to work on the word processor. Yet I made it, not making as many copies for the local membership as I had hoped, but meeting the requirement to send something with substance to the national organization.

The Yuma meeting finally took place at March 1991, and at that meeting Bob Boynton replaced me as secretary-treasurer while my office was changed to convention coordinator. When the national board gave San Diego the nod at the 1991 national convention, the work started.

After looking at facilities and cost, we narrowed the decision to seven potential hotels, all in Mission Valley. Some outside interests, concerned about the high hotel cost in New York, wanted us to consider a return to college campuses, but having obtained a rate at a couple of hotels of under $70 for four people, we were now competitive with college campuses. Requests for consideration of campuses persisted until it was pointed out that alcohol-on-campus regulations kept getting stricter and SABR might have a dry convention.

When the San Diego chapter (which became the Ted Williams Chapter) had a regional meeting at the stadium in September, a decision was made to form a steering committee to make future decisions for the chapter. Even after the SABR convention was wrapped up, the steering committee structure still serves the chapter well. Additional screening narrowed the selection process to four hotels, and in Spring 1992 the Hanalei was selected. Part of my mission at the 1992 convention in St. Louis was to promote the following year’s convention at the Hanalei.

Of course, nothing goes as planned. Our daughter, who wasn’t due until July 22, was born the morning of June 25, 12 hours before I was supposed to leave. But with a non-refundable airline ticket and nobody leaving the hospital until after my return because of a Cesarean, I ended up making the trip.

Two weeks after the convention the Hanalei, which Atlas Hotels had put up as collateral for another property, changed ownership. An emergency meeting was held, and we changed the convention site to the Town and Country. The new ownership of the Hanalei, as well as the eventual convention, proved this to be a good decision.

The agenda was put together and speaker panels were filled. We had a special reception Thursday night with Bobby Doerr, a banquet with Dick Williams as keynote speaker, and major-league, minor-league, 1984 Padres, and non-player panels. Those who went to the Padres game on Friday night even got to see Old-Timers’ Night, although the Padres had traded Gary Sheffield the day the convention opened and the home team that night wasn’t too exciting against the Reds. A lot went wrong. Fortunately, not many people at the convention knew what how it was supposed to go and it was well received.

Maybe someday we’ll do it again.

This essay first appeared in “Society for American Baseball Research” (Turner Publishing, 2000). To go back to the SABR convention history page, click here.