SABR 29: A no-hitter at the SABR convention 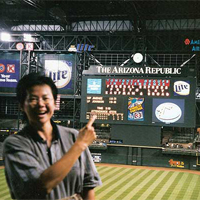 One of the highlights of any SABR convention is the traditional Friday night ballgame. All longtime attendees have their favorites, but it’s going to be hard to top the SABR 29 convention game at Bank One Ballpark (now Chase Field) on June 25, 1999, in Scottsdale, Arizona.

On that night, St. Louis Cardinals rookie Jose Jimenez didn’t allow a hit to the Arizona Diamondbacks as he outdueled the great Randy Johnson — already the author of one no-hitter and, five years later, a perfect game — to beat the Diamondbacks, 1-0.

SABR members were recently asked to share their memories of that night:

“If you didn’t vote for this one, you weren’t there. … The game was scoreless until the ninth when the Cards were able to push across a run. Eric Davis saved the no-no with a diving catch in center field. Along the way, RJ picked up his 2,500th career strikeout. More than 400 SABR members and guests were among the 47,274 on hand for the game. The contest was played in 2:10 and buses were scheduled to pick up members based on a three-hour contest. There was a bit of a wait to get back to the hotel, but members didn’t seem to mind. It’s going to be a long time before a convention will top this unforgettable SABR game.”
— Rodney Johnson, convention organizer and president of SABR’s Flame Delhi Chapter, which played host to SABR 29.

“Randy Johnson clearly outpitched Jimenez, even though we’ll all remember the no-hitter. One of the best 1-0 games in history.”
— Steven Nadel

“The thing I remember is getting there early to watch Mark McGwire take batting practice the year after he hit the 70 homers and the moonshots that he was hitting.”
— Roger Erickson

“I also remember the ’99 SABR game, which included a no-hitter and the fact that Randy Johnson threw a two-hitter and lost. That game was the fastest ever played at the BOB. We had informed the bus drivers to return to the park about 10:30 and suddenly there were 600 attendees ready to return to the hotel before 9 o’clock!”
— Don Thompson

“My wife flew out from Cleveland that morning, getting up around 4 a.m. ET. She’d been up for probably 17 hours straight, after a long work week, when the Cardinals recorded the last out and proceeded to mob Jose Jimenez. She turned to me and said, “They act like they’ve never won a game before.” I nodded toward the scoreboard and then she remembered what she had just seen — a no-hitter. It was my first (and only) in-person no-hitter. Though I watched Lenny Barker’s perfect game on TV in 1981, I’ve never claimed to have been one of the 500,000 who claim to have been there.”
— John Zajc

“The game in Phoenix was my first no-hitter too. What’s really strange is that my wife and I were in San Diego on vacation two years later. Anyway, on the evening of Monday, September 3, 2001, we went to Qualcomm Stadium to see the Padres play the Cardinals. Bud Smith pitched a no-hitter that night. So, my only two no-hitters in person have been by Cardinals rookie pitchers who never really did much more than that, both in the Pacific time zone, some 3,000 miles from home. How strange is that? Funny thing is, two nights later, Woody Williams pitched for the Cardinals in another game we attended at Qualcomm. He pitched six perfect innings, gave up a leadoff single with one out in the bottom of the seventh. That runner was erased on an inning-ending double play. Williams pitched a perfect eighth and then gave up a single with one out in the ninth. That runner, too, was erased on a game-ending double play. So he faced the minimum 27 men. Thus, in my last two games at Qualcomm, I saw the Padres get a total of two hits. I’ll always connect that trip to the 1999 convention in Arizona.”
— Douglas Jacobs

“The Jose Jimenez no-hitter is monumental. Not only did a rookie beat a Hall of Famer, but it was a tight, taut game not settled until the ninth inning. And that ninth inning was incredible: Randy Johnson struck out his 2,500th batter — and the next batter singled in the only run! But the best was still coming. The bottom of the ninth took about a half-hour to finish and this rookie had to wait to complete his no-no through two stoppages. After the first out, a lout ran onto the field and it took about 10 minutes for security to corral him. Then, Eric Davis made a shoe-string catch in right field that was challenged by the Arizona manager for another 10 minutes! Finally, the last batter made the last out. SABR nation rose and applauded. But … BUT! The Arizona fans just left! Incredible! Now I know why the Arizona papers published a primer on how to watch a ballgame before their Series win in 2001. I also remember the comments on the nosebleed seats, the long wait for the buses and the conversation on the ride back among the SABR-en, “How many no-hitters have you seen?” chief among them. Another memory is that our bus driver knew his city. While other buses went via the main drag, ours sped us back to the hotel via a car-free parallel road so fast that we had to wait another half-hour to share the stories with the rest of SABR nation.”
— Seamus Kearney