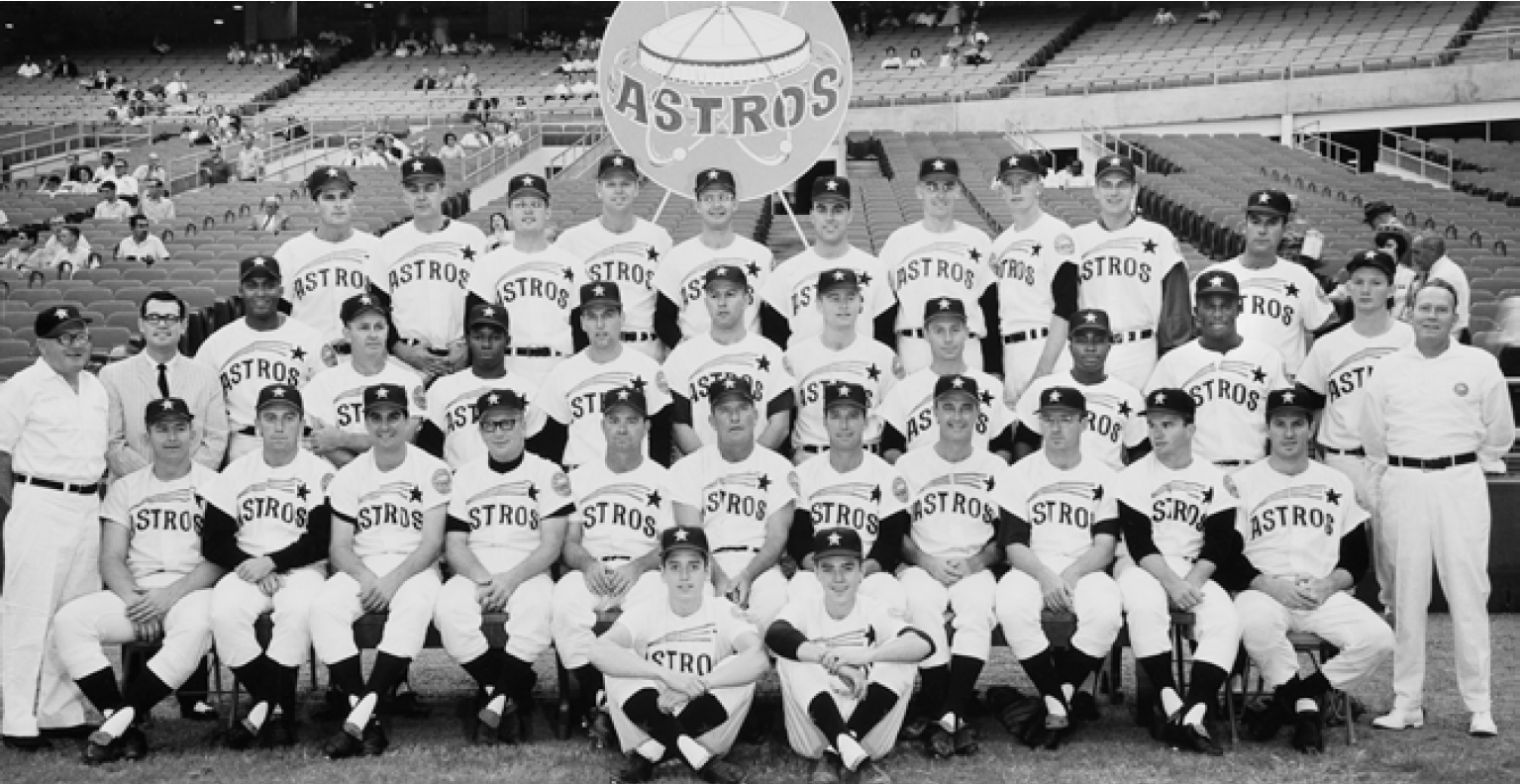 On April 9, 1965, the former Houston Colt .45s took the field as the Houston Astros, inaugurating indoor baseball in the Astrodome with a 2-1 exhibition win over the New York Yankees.

Three nights later, on April 12, a standing-room-only crowd of 48,546 (42,652 paid1), including Commissioner Ford Frick, National League President Warren Giles, and a large contingent of guests from NASA, was on hand to witness the first official contest inside the Space Age wonder of the sports world as the Houston Astros played host to the Philadelphia Phillies.

“It seemed only right that the Phils should open the league season in the spectacular Harris County Domed Stadium,” cracked one scribe. “The Philadelphia Phillies, remember, are essentially the same baseball team which took off like Gemini II last summer only to lose nine of its final 10 games and crash in despair.”2

Before the game Astros players and management assembled on the field for a ceremony to retire the number 32 worn by reliever Jim Umbricht, the only Houston pitcher to post a winning record in each of the team’s first two seasons. Umbricht had died of melanoma on April 8, 1964, at the age of 33. After the funeral, his ashes had been spread from a small plane over the Astrodome construction site.3

Shifting from sadness to celebration, 22 of 24 NASA astronauts, each of whom was presented with a lifetime major-league pass by Giles, were introduced to throw out the first pitch, simultaneously, to 22 of the Astros.

Along with a new name, new uniforms, and a new stadium, the Astros had a (more or less) new manager in Lum Harris. Harris, who had succeeded Paul Richards as interim manager of the Baltimore Orioles when the latter stepped down in August 1961 to become general manager of the expansion Colt .45s, had followed Richards to Houston as a coach in 1962. Harris served almost three full seasons as coach under manager Harry Craft until Richards fired Craft and turned the job over to Harris on September 19, 1964.

Harris’s pick for Opening Day starter was Bob Bruce, a 31-year-old right-hander who had enjoyed a breakout season in 1964, setting club records with 15 wins (against nine losses), four shutouts, and a 2.76 ERA.

Phillies manager Gene Mauch held back his number-one starter, Jim Bunning, for his club’s home opener against the Giants two days later and instead gave the ball to Chris Short. The left-handed Short had enjoyed a breakout season of his own in 1964, with a 17-9 record, fanning 181 in 220⅔ innings while walking only 51, and posting the NL’s third-best ERA at 2.20. It was Short who, with Bunning, had been called upon by Mauch to start eight of the Phillies’ last 11 games in 1964. Despite the heavy workload, Short pitched reasonably well, giving up only six earned runs in 19 innings over his final three starts, but failed to win even one as the reeling Phillies blew a 6½-game lead and lost the pennant.

Leading off for the Phillies as the game got under way was second baseman Tony Taylor, who doubled to left for the first official hit in the Astrodome. Dick (then Richie) Allen, who’d enjoyed a phenomenal freshman season in 1964, winning NL Rookie of the Year honors and finishing seventh in the MVP voting, popped up to Joe Morgan at second for the first out. After Johnny Callison flied out to center, Wes Covington was caught looking for the Dome’s first strikeout.

Short made short work of the Astros in the bottom of the first, issuing only a walk to the rookie Morgan, starting his first season in the majors after brief call-ups to Houston in 1963 and 1964.

After a scoreless second, Ruben Amaro opened the third inning for the Phillies with a single to left. Short sacrificed Amaro to second. Taylor tapped back to the mound for the second out, but Allen followed with a 410-foot blast over the fence in straightaway center field to put the Phillies up 2-0.4

Short, for his part, handcuffed the Astros inning after inning, facing the minimum three batters in the second, third, and fifth innings, and offsetting two singles with three strikeouts in the fourth.

Short ran into minor trouble in the seventh when, with one out, he walked Jim Beauchamp and Joe Gaines back-to-back. John Bateman’s bunt moved the runners to second and third, but Mike White, hitting for Bruce, struck out to end the threat.

Bruce scattered nine hits while walking one and striking out five over seven innings. Only in the second did he manage to keep the Phillies off the basepaths. In the fourth he survived a jam by fanning Short with the bases loaded.

Hal Woodeshick took the mound for the Astros in the top of the eighth, with his club still two runs down. The 6-foot-3-inch sinkerballing southpaw, after an injury-plagued 5-16 season as a starter for Houston in 1962, had become the team’s relief ace in 1963, winning 11 games with a team-leading 10 saves and a 1.97 ERA and earning a selection to the All-Star Game. He also led the NL with 23 saves in 1964.

The Phillies immediately put Woodeshick to the test. Callison singled to left to open the inning, John Herrnstein, who had replaced Covington in left field in the fifth, sacrificed Callison to second. A grounder to second by Tony Gonzalez advanced Callison to third base, bringing Dick Stuart to the plate.

Manager Harris made the decision to avoid pitching to Stuart – who was acquired by Philadelphia during the offseason for his potent bat (75 home runs and 232 RBIs in two seasons for the Boston Red Sox) in exchange for pitcher Dennis Bennett – and instead ordered an intentional walk to put runners at the corners. Mauch pulled the slow-footed Stuart for the more nimble Bobby Wine, but Woodeshick struck out Clay Dalrymple looking to end the inning.

Allen’s ninth-inning, two-out boot of Beauchamp’s grounder to third gave a glimmer of hope to the Astros, but Allen recovered to scoop up a groundball by Gaines on the next play, tossing to first to end the game.

About the only bright spot for the Astros that day was the fine play of the 21-year-old Morgan. The future Hall of Famer and eventual runner-up for the 1965 NL Rookie of the Year Award collected a single, a double, and a walk in four trips to the plate. He recorded six putouts and nine assists as he effectively covered the right side of the infield.

Short, with a 2-0, four-hit shutout, was the winning pitcher. Bruce, who struggled in spots but essentially made only one bad pitch, was tagged with a hard-luck loss.

Short had been sharp all night, striking out 11, walking only three, and permitting but one runner to reach third base. A notoriously slow starter in springs past, he was elated. “It was the first time in my life, either in the majors or minors, that I ever pitched a season opener,” said Short, “and it must be the first time I have ever won a game the first two weeks of any season in the big leagues.”

Short gave a glowing review of the Astrodome. “It’s an excellent park to pitch in,” he said. “The mound is real good and so are the dimensions. Also, the absence of wind helps a lot.”

“Another thing that surprised me was that I was able to raise a good sweat. I like to sweat when I’m working and I was afraid that because of the air-conditioning, I would not be able to perspire.”5

Those who played the infield and outfield had a somewhat different take on the Astrodome, or, more specifically, the stadium’s steel-framed, twin-layered clear plastic roof.

“The big news of that first official game … was not Allen’s homer, Short’s pitching, or the Phillies winning,” Astros center fielder Jimmy Wynn later recalled. “It was the fly balls that we couldn’t see. … I remember running in on a short fly ball, then looking up to see it nowhere. The next thing I knew, the ball was falling to the ground beside me for a ‘lost-in-the-sky-on-the-way-up-or-down’ base hit. Everybody else was having the same problem. You just couldn’t see the ball a lot of times once it blended into all those clear glass panels and close-to-ball-color girders in the Astrodome roof.”6

On April 20 the Astrodome’s 4,596 plastic windows were coated with 700 gallons of a special off-white paint developed by architects, engineers, and optical experts to resolve the visibility problem, at a cost of $20,000.7 That the painted-over roof would eventually cause the grass on the field to die would be a problem for another day.