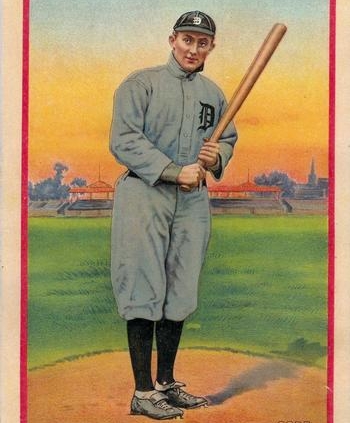 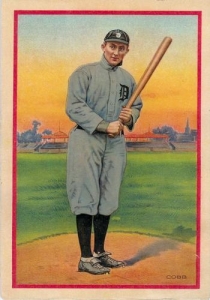 Who is the most valuable to a ball club – a star pitcher of the Walter Johnson type, a great infielder of the Napoleon Lajoie brand or a sensational outfielder of the Ty Cobb variety?1

At the outset of the 1911 season, Ty Cobb was considered one of the top players in baseball, coming off a season in which he claimed his fourth consecutive American League batting title in a controversial race with Nap Lajoie, the veteran second baseman who had previously won four batting titles himself.2 Expectations were sky-high for the 24-year-old Cobb in 1911. Asked if he would trade Cobb for Washington’s Walter Johnson – who had led the majors in strikeouts in 1910 at age 22, while winning 25 games – Detroit manager Hughie Jennings said he would not do so under any conditions: “Though Johnson might win twenty-five or thirty games for my club by his great pitching, Cobb will win an equal number because of his great hitting and wonderful base running; incidentally he will save a few games by his sensational fielding.”3

Though Cobb had a stellar 1910, his Detroit Tigers failed to win the pennant after having won it in 1907, 1908, and 1909. Coming into 1911, Jennings wrote in a syndicated column that he expected his squad to reclaim the title in a close race.4 Syndicated writer Tommy Clark, in previewing the season, disagreed, writing of Detroit:

Very little improvement over last year. Twirling corps again weak. Infield inferior to many other clubs. Outfield is still one of the best in the country. Has poor catching staff. With Hugh Jennings’ never say die spirit and Ty Cobb’s batting and base running the team ought to finish third.5

Coming into Bennett Park to play the Tigers in the opening game were the Chicago White Sox. In 1910 the White Sox struggled to a sixth-place finish after several years in the first division. Led by a great pitching staff headed by Ed Walsh, the White Sox were expected to struggle to score runs. In 1910 Chicago finished seventh in the AL in runs. The team’s leading hitter had been outfielder Patsy Dougherty, who hit .248.6

George Mullin started for Detroit. Known as a strong cold-weather pitcher, Mullin had started games for Detroit in the 1907, 1908, and 1909 World Series. He featured a strong fastball and a sharp curveball.7 Opposing Mullin was Big Ed Walsh. Walsh, inducted into the Hall of Fame in 1946, was coming off a 20-loss season in which he posted a 1.27 ERA.

After the 1910 season, Walsh was part of an AL All-Star team that prepared the pennant-winning Philadelphia Athletics for the World Series. Walsh pitched a six-hitter and defeated the eventual World Series champions 3-1.8 Describing Walsh decades later in The Glory of Their Times, Sam Crawford said: “Great big strong-looking fellow. He threw a spitball – I think that ball disintegrated on the way to the plate and the catcher put it back together again. I swear, when it went past the plate, it was just the spit went by.”

The game was originally scheduled for April 12 but was postponed a day because of rain.9 In the bottom of the first, Detroit scored its first run of the campaign. Left fielder Davy Jones led off with a single to left and advanced to third on a sacrifice by shortstop Donie Bush and a groundout by Cobb. Sam Crawford, the veteran outfielder coming off a down (by his standards) 1910 season, tripled to left center to drive in Jones.10 At the end of the first, Detroit led 1-0.

Weak-hitting catcher White Sox catcher Billy Sullivan led off the third with a walk and advanced to second on Walsh’s sacrifice to bring up the top of the order. But both Amby McDonnell and Harry Lord made groundouts, stranding Sullivan.

In the bottom of the third, Cobb batted with one out and according to the Chicago Tribune, “poked a tall fly just over the barrier in the left field seats.”11 It was Cobb’s 29th career home run, giving the Tigers a 2-0 lead.

At this point, Walsh settled in and did not allow another run until the eighth. The White Sox made no offensive noise until the sixth. After Bush “stole a hit” from Walsh with a play at short, Mullin walked McConnell. Lord bunted and Mullin threw the ball away, allowing McConnell to reach third. Lord stole second, putting the tying runs in scoring position.

One out later, Dougherty singled to left on a ball that “[hopped] past Bush” and scored McConnell.12 Out in left, Jones, the least-heralded member of Detroit’s Cobb-Crawford-Jones outfield, retrieved the ball and threw Lord out at the plate, preserving the Tigers’ one-run lead.

Both teams’ bats were then silent until the bottom of the eighth, when Bush reached on a Texas Leaguer. Walsh struck out Cobb on a “spitter that broke close to [his] neck,” but Bush stole second.13

Up next was Crawford, who doubled to right-center, driving in Bush. Crawford himself scored on what the Chicago Tribune described as “a miscue between Walsh and Payne, who replaced Sullivan at bat in the eighth, let a pitched ball go to the stand and Crawford scored a moment later.”14 At the end of eight, the Tigers led 4-1.

Mullin returned to the mound in the ninth seeking to secure the win. Lord grounded out to second baseman Jim Delahanty for the first out. White Sox shortstop Rollie Zeider reached when Bush dropped his fly ball. Zeider stole second and advanced to third on an out by Dougherty. Right fielder Jimmy Callahan singled to score Zeider and make the score 4-2.

Up next was former Tiger Matty McIntyre, who had been sold to Chicago after losing playing time in the outfield to Jones. When he came up for his first at-bat in the second inning, the fans at Bennett Park gave him a “rousing reception that lasted fully three minutes.”15 Now he could make his former team regret getting rid of him. But Mullin struck out McIntyre to end the game. The Tigers had won 4-2. Only 5,107 fans attended the game, which was played under gray and rainy skies.16

Mullin’s strong pitching combined with Cobb’s and Crawford’s hitting led Detroit to a victory in the opening game. As put by E.A. Batchelor in the Detroit Free Press game summary: “With Sam Crawford by his cannon ball drives endangering the lives of the defenders, Ty Cobb hoisting the ball out of the lot, and George Mullin holding the enemy at bay, there couldn’t have been any other result than a Tiger victory yesterday afternoon.”17

The Tigers went 21-2 to start the season but limped to a 35-41 record in the second half and finished 13½ games behind the pennant-winning Athletics. Crawford finished third in batting average, behind Cobb and Shoeless Joe Jackson, with a .378 average, while Cobb led the league in batting (.419), RBIs (127), and stolen bases (83). The White Sox, meanwhile, finished fourth in the American League with a 77-74 mark.

This game was fact-checked by Gary Belleville and copy-edited by Len Levin.

2 The 1910 batting race between Cobb and Lajoie came down to the season’s final day. With Cobb holding a narrow lead on the final day of the season, the St. Louis Browns (Cleveland’s opponent) attempted to hand the batting title to Lajoie. They played their third baseman on the outfield grass for both games of a doubleheader, thereby conceding a bunt hit to Lajoie. Lajoie went 8-for8 in the season-ending doubleheader and finished with a .384 average, narrowly finishing behind Cobb’s .385. Years later, research discovered that one of Cobb’s hits had been counted twice, causing his batting average to fall below Lajoie’s.

3 “Fielder of Greater Use Than the Pitcher.

7 Biographical information about George Mullin comes from his SABR Biography by David Cicotello.

10 Crawford is the all-time triples leader with 309.