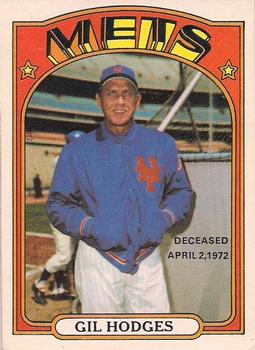 On April 15, 1972, New York Mets fans filed into Shea Stadium with somber faces on Opening Day, an occasion usually inspiring smiles, laughs, and hopes. But rooters in blue and orange from Montauk to Monmouth County felt the weight of absence; Mets manager Gil Hodges had died on April 2, when a fatal heart attack felled him after a round-and-a-half of golf with coaches Eddie Yost, Joe Pignatano, and Rube Walker. He would have turned 48 on April 4.

To the fans, Hodges was a nexus to the glory days of the 1950s — at least one New York team was in the World Series nine of 10 years during the decade. In the seventh game of the 1955 fall classic, Hodges knocked in both runs of the Brooklyn Dodgers’ 2-0 victory to secure the team’s only World Series win in Brooklyn. Three years later, the Dodgers began their existence in Los Angeles.

To the Mets, Hodges was a leader who erased the “lovable losers” aura when he took over helming duties in 1968. The following year, the Mets upset the favored Baltimore Orioles in five games and won the World Series. But where other skippers focused only on strategy, Hodges incorporated a human touch to his job. “He was more than just a baseball manager to the players,” said Ed Kranepool. “He took a personal interest in his players on and off the field. If any of us had family problems, Gil was always there to help out. He’s not only going to be a loss to baseball but especially to us, the Met players.”1

Yogi Berra succeeded Hodges as the Mets manager. But there was some confusion regarding his elevation to the job immediately after Hodges’ death. “Unaware of Berra’s hiring, the press speculated that the leading candidate to replace Hodges was the Mets’ director of player personnel, Whitey Herzog,” noted Hodges biographer Mort Zachter.2

Tom Seaver, who went 20-10 in 1971 and led the National League with a 1.76 ERA, had the honor of being the Mets’ starting pitcher in the inaugural 1972 contest against the Pittsburgh Pirates. He kept the Bucs hitless through six innings before Tug McGraw relieved him in the top of the seventh and preserved the 4-0 shutout against the 1971 World Series champions.

The New Yorkers notched two runs off Pittsburgh ace Dock Ellis in the bottom of the second. Rusty Staub began his Mets tenure with a single; the outfielder known in Canada as “Le Grand Orange” for his rust-colored hair, had come from Montreal in a trade for Ken Singleton, Mike Jorgensen, and Tim Foli on April 5.

Cleon Jones followed Staub’s base hit with another single, putting runners on first and second. Jim Fregosi’s double scored Staub and moved Jones to third, from which he scored on Kranepool’s fly ball and scored the first of his 39 runs in 1972.

The Mets added two runs to their lead in the bottom of the sixth on Kranepool’s two-run homer after Fregosi reached base on a walk.

Seaver’s five-hit shutout performance in six innings continued a dominance over the Pirates. In the Pittsburgh Press, Phil Musick observed that Pittsburgh was winless against Seaver for the past three seasons. Indeed, the last victory was on September 14, 1968.3 “He never goes out to the mound half-stepping. And you can’t go up there guessing, because you know what you’re going to get. He always challenges you with that fastball,” noted Pittsburgh fan favorite Al Oliver, who hit .312 in 1972.4

McGraw showed his usual aplomb in his three innings on the Shea Stadium mound, allowing no hits and no walks. He also struck out Richie Hebner, Gene Clines, Willie Stargell who in 1972 hit .300, .334, and .293, respectively.5

Like Seaver, Ellis lasted six innings. Pirates manager Bill Virdon employed right-handed reliever Dave Giusti in the seventh and southpaw Ramón Hernández in the eighth. Both performed ably, though it was likely no surprise to Pittsburgh’s fans. Giusti, the 1971 NL leader in saves, allowed one hit; Hernández struck out Jones and Fregosi.

Opening Day was more than a sign of spring, which was not tangibly evident to the 15,895 attendees enduring temperatures in the 40s. It was a salve rescuing the national pastime from a players strike that began in late March. But rather than a strictly solemn occasion, the Mets saw a boon through the sadness of Gil’s passing and the stress of the strike. “Both events may bring the players together somehow,” observed Kranepool. “The managers are altogether different, but I don’t think that will change the Mets. One was a stern taskmaster who kept everything within himself. Yogi is an extrovert. We’ll have to see how the players react.”6

The newly crowned Berra had praised the acquisition of Staub and commended the future of New York’s National League squad entering its second decade. “I think we’re of championship caliber, on a par with the ’64 Yankees,” he said. “We have a better pitching staff. Maybe not as much power, but I think we’ll make some runs this year.”7

The 1972 Mets went 83-73, but their NL East rivals from Steel City captured the pennant with a 96-59 tally. Cincinnati beat Pittsburgh in the playoffs and lost to Oakland in the World Series; The Mets battled the A’s in a seven-game World Series the following year. Though they felt the loss, it was compounded by the absence of Hodges.

Besides kicking off the 1972 season, Opening Day had another meaning for Mets Nation — the team retired Hodges’ number 14. It’s a favorite matter of speculation regarding the Mets’ 1970s prospects if Hodges had survived the heart attack. But at least on the first Opening Day without the renowned skipper, they could honor his legacy with a victory to begin the 1972 season.

5 Clines did not have enough at-bats to qualify for the NL batting championship. Billy Williams won the title with a .333 average.