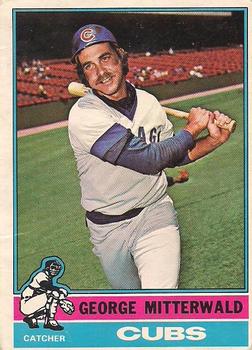 In the 1950s announcer Jack Brickhouse dubbed Wrigley Field the “Friendly Confines.” Baseball fans know there is nothing friendly about the ballpark when the winds are blowing. As longtime WGN weatherman Tom Skilling put it, “When the northeast gales off nearby Lake Michigan howl in toward home plate, the most mediocre pitchers can perform as if they were Greg Maddux. And when a southwest jet stream is screaming outbound, the slightest batters can hit mammoth tape-measure home runs.”1

Typically, the winds blow in during April, and the jet stream that Skilling mentioned is usually experienced in the warmer months. That was not the case on April 17, 1974, when the Pittsburgh Pirates were in town for the second game of a three-game series (Pittsburgh won the first game, 8-5, in 12 innings).  A 12-mile-per-hour wind blowing toward center field “nudged nine balls over the Wrigley Field fence.”2 The Pirates hit three, the Cubs’ M&M Boys (Madlock, Mitterwald, Monday, and Morales) accounted for six. The big surprise was three off the bat of George Mitterwald.

Mitterwald had joined the Cubs from Minnesota on December 6, 1973, in a straight-up swap for backstop Randy Hundley. Mitterwald was coming off his best season (16 homers and a .259 average in ’73.) At age 28, Mitterwald was enthusiastic about joining the Cubs: “A ballplayer’s most productive years are from 28 to 32. I should be right there. I’ve always said that if I go to bat 500 times, I’ll hit 20 home runs and drive in 80.”3

The Cubs came into the game at 3-3. Mitterwald had a four-game hitting streak and was batting .417. The Pirates, with a 2-7 record, sent their Opening Day pitcher, lefty Jerry Reuss, to the mound. The Cubs countered with Burt Hooton in his second start of the season. The Pirates got to Hooton immediately. Rennie Stennett and Richie Hebner rapped singles to put runners on first and third. Al Oliver grounded to Hooton, who threw out Stennett at the plate. Willie Stargell followed with a blast over the wall to put Pittsburgh ahead 3-0. Hooton maintained his composure and retired the next two batters.

Vic Harris opened the first with a single, then Rick Monday walked. After a fly out, future Hall of Famer Billy Williams drove in a run with a single. Another fly out followed before Bill Madlock drew a walk to load the bases for Mitterwald. Mitterwald had been battling illness and sported a black eye from a bullpen mishap the previous day. Reuss served up a straight ball that the catcher deposited into the left-field seats for the first and only grand slam of his career. Judy Mitterwald understood the significance of the event and orchestrated a deal with the young Cubs fan who retrieved the ball. She presented the ball to her husband after the game.

Hooton had the lead, but he would struggle. Two singles, a walk, and an error added a Pirate run and Hooton had to coax outs from Oliver and Stargell to end the inning with the bases loaded. The Cubs added a cushion for him when Monday and Jerry Morales launched back-to-back homers in the bottom of the second.

Hooton, in the days before pitch counts, was allowed to go the distance because the Cubs had built up a massive lead. In the third, Mitterwald sent Reuss to the showers, and gave the Cubs a 10-4 lead, with his second blast. In the fourth he faced Steve Blass with the bases loaded and was “itching for the ‘go’ sign on a 3-0 pitch.” Instead he was given the “take” and drove in a run with a walk.4 Blass, a former All-Star, had fallen on hard times the previous season and lost all direction on his pitches. He hurled the final five innings of this game for the Pirates and surrendered five hits and seven walks. It proved to be his final game pitched in the majors.

In the sixth, Madlock and Mitterwald delivered back-to-back homers. Mitterwald ended his day with a double in the eighth. Manager Whitey Lockman figured three homers, 14 total bases, and eight RBIs were enough for the day and sent in a pinch-runner. Mitterwald’s eight RBIs were the most by a Cub since Ron Santo in July 1970 versus the Expos. Three homers by a Cub were not that unusual; after all, Ernie Banks did it four times. Madlock pointed out the most important achievement of the game: “It’s a sign of a good club when you come back after you’re three or four runs behind.”5

Hooton got into a good rhythm and tossed scoreless ball until the ninth. Then, with an 18-4 lead, he tired. The result was six hits, including home runs by Richie Hebner and pinch-hitter Richie Zisk that accounted for five runs. Few pitchers toss a complete game when they surrender 16 hits or 9 runs, but Hooton went the distance for his first victory of the season.

The Cubs beat the Pirates again the next day, 1-0. Billy Williams hit a sacrifice fly in the first to score Rick Monday. The club left on an 11-day road trip during which it dropped 9 of the 11 games. Lockman was fired shortly after midseason and replaced by Jim Marshall as the Cubs finished 66-96 in sixth place.

The Pirates left Chicago with a 2-9 record. Two months later they were at 21-34 and mired in sixth place. They played the remainder of the season at a 67-40 pace and took first place in the division over the Cardinals. They lost in the Championship Series to the Dodgers, three games to one.

George Mitterwald was well on his way to that 20-homer and 80-RBI season he aspired to. He was batting .563 with an OPS of 1.854 after April 17. Sadly, the baseball gods had other plans for him. Over the next eight games he went 3-for-28. He continued to struggle and watched as his average reached a lowly .182 in early June. Soon after, he lost his starting position to Steve Swisher. Mitterwald’s hopes of 500 at-bats were gone; what’s more, he hit only one more home run at Wrigley the remainder of the season; he did add three road home runs.

Baseball-Reference and RetroSheet are indispensable when creating game stories like this.