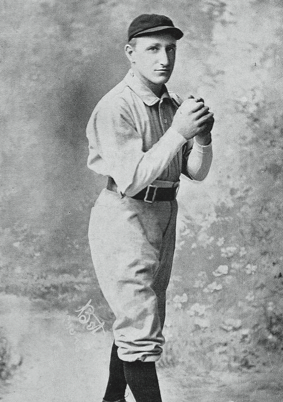 On April 19, 1900, hundreds of baseball fans gathered outside the Russell House in Detroit to cheer their Tigers and begin Opening Day festivities. A marching band led a parade of carriages carrying city and county officials, reporters, and the Tigers, wearing their new white uniforms with black trim. The Buffalo Bisons rode in their own carriage at the rear, dressed in their road grays. About 400 members of the Elks joined the parade en route to Bennett Park, while streetside fans blew tin horns and cheered lustily.

It was also the first game for the re-christened league (Chicago had been scheduled to host the inaugural game, but it was rained out.) Western League owners had renamed the circuit during the offseason, signaling league President Ban Johnson’s ambitions of achieving major-league status. Although the caliber of play among American League teams during the 1900 season is debatable,[fn]Wayman, Joseph M. “Major League Status for the AL: If 1901, Why Not 1900?” Baseball Research Journal 27 (1999), p. 74-76. Shiner, David. “Another Look at the AL of 1900,” The National Pastime 21 (2001), p. 28-31.[/fn] fans still felt enthusiastic about the league’s major-league aspirations, which it achieved in 1901.

Aside from being the first game in the history of the American League, the afternoon was made memorable by Morris “Doc” Amole’s pitching performance. The Buffalo starter silenced the hometown favorites without a hit, winning 8–0.

About 5,000 fans packed the grandstand and bleachers—hundreds more ringed the field. It was the largest Opening Day crowd in Detroit since its National League days in the late 1880s. Before that afternoon, Amole, a 21-year-old left-hander, was probably best known for a prank he pulled when he was 17 years old during his first season of professional ball with Wilmington (Delaware) of the Atlantic League. During a poorly planned exhibition night game on July 4, 1896, Amole replaced the ball with a “torpedo” firecracker that ignited on impact. Batter Honus Wagner couldn’t see the explosive device in the dim light. He smacked the torpedo, resulting in a flash of light and a loud pop. The game ended abruptly as Wagner stood stunned at the plate. The Wilmington players fled the field while fans left the stands and angrily demanded refunds.[fn]Hittner, Arthur D. Honus Wagner: The Life of Baseball’s “Flying Dutchman.” (Jefferson, North Carolina: McFarland & Company, 1996).[/fn]

Amole compiled a 4–10 record in 18 majorleague games with Baltimore and Washington in 1897. He joined Buffalo in 1898, going 11–11 with one shutout. During the 1899 season, Amole ran into trouble—the team fined him and a teammate $25 apiece for “keeping late hours.”[fn]“News And Gossip,” Sporting Life, July 22, 1899.[/fn] Buffalo released Amole that July, then re-signed him.

Detroit right-hander Jack Cronin retired the side in the first before Amole took the mound. He initially looked shaky, as Tigers left fielder and leadoff hitter Harry Bay reached base on an error and advanced to second on a wild pitch. Center fielder Dick Harley walked and the runners advanced on a sacrifice. Amole escaped damage by striking out second baseman Suter Sullivan and getting right fielder Lew “Sport” McAllister out on a foul fly.

The Tigers’ only other scoring opportunity came in the fourth. Amole walked shortstop Norman “Kid” Elberfeld, who advanced to third after a wild pitch and a sacrifice bunt. With one out, Elberfeld attempted to score on an infield grounder, but Bisons shortstop Bill Hallman threw him out at the plate. Third baseman Ed Wheeler ended the inning with a grounder to second. Detroit didn’t get another baserunner until there was one out in the ninth, when Amole hit Elberfeld. But the Tigers went quietly as Sullivan flied to center fielder Jake Gettman and McAllister popped foul to first baseman George “Scoops” Carey.

Amole didn’t have perfect control, but he struck out four and used his curveball effectively to keep Tigers hitters mystified. Cronin pitched credibly for Detroit but was backed by sloppy play. The Tigers committed eight errors, including three by Elberfeld.

The next day’s Detroit Free Press headline said it all: “BASKET OF FRESH GOOSE EGGS.” The anonymous sportswriter praised Amole’s performance, albeit in backhanded fashion:

Doc Amole … was in grand form, had all sorts of curves and speed and kept the Tigers guessing so effectually that only once in the game was there anything that approached a base hit. … Perhaps the wound will heal sufficiently to allow forgiveness to be granted and due credit allowed the twirler for his wonderful feat; but forgotten, never![fn]“Basket of Fresh Goose Eggs,” Detroit Free Press, April 20, 1900.[/fn]

Amole’s performance raised Buffalo’s expectations for the left-hander, but his past digressions also raised concerns. “[Amole] is in grand form and promises to be the star twirler in the American League this season,” wrote the Buffalo correspondent for Sporting Life. “But he must take care of himself in order to sustain this reputation. Manager Dan Shannon declares that Doc is good and has promised to keep in the straight and narrow path. Every fan in Buffalo hopes that this is true.”[fn]“Buffalo Briefs,” Sporting Life, April 28, 1900.[/fn]

Amole’s success was short-lived. Indianapolis pounded him for a 7–1 loss four days later, and he finished the season 22–22 with two shutouts in 47 games (41 starts). He continued to pitch for Buffalo through 1903, splitting that season with Providence. Amole remained with Providence through the 1904 season and finished his professional career in 1905, bouncing between Syracuse, Utica, and Scranton of the New York State League. He never reached the level of dominance he displayed in the 1900 season opener.

Major-league records don’t consider Amole’s performance to have been an Opening Day no-hitter because the American League was not considered a major league at the time. In all of baseball history there has been only one, that pitched by Bob Feller of the Cleveland Indians against the Chicago White Sox on April 16, 1940.

Little is known about Amole’s life after baseball. He was found dead at the age of 33 in his Wilmington boardinghouse in March of 1912.[fn]“Latest News by Telegraph Briefly Told,” Sporting Life, March 16, 1912.[/fn] He had arrived in town three weeks earlier to work as a carpenter for a local contractor. Amole had been complaining about his health but was not known to be seriously ill. 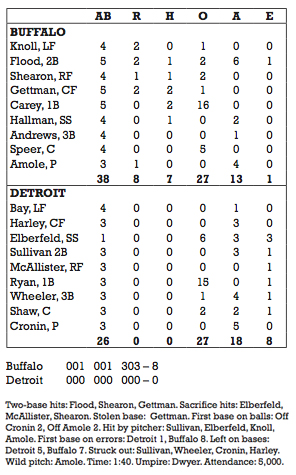