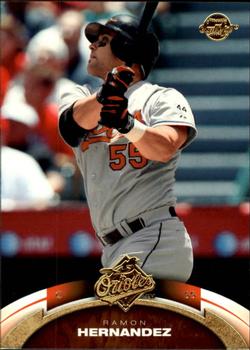 Early in the 2006 season, the Baltimore Orioles were no strangers to blowouts, having beaten the Tampa Bay Devil Rays 16-6 in their second game of the season on April 5 before losing 14-8 to the Boston Red Sox on April 7. They ran off a string of one-run victories against the Devil Rays and Los Angeles Angels of Anaheim from April 13-15 to run their record to 7-5, then lost to the Angels on April 16 by a count of 9-3 before rebounding with a 4-2 win to take three of four in the series. At 8-6 and a second-place showing after four games of a seven-game homestand, the Orioles were hoping to enjoy their first winning season since 1997.

They hosted the Cleveland Indians for a three-game set that began with Cleveland trouncing the Orioles 15-1 on April 18 behind a 20-hit attack led by Grady Sizemore, Victor Martinez, Ben Broussard, and Casey Blake, all of whom had three hits. The second game of the series was shaping up to be another Cleveland win when the Indians jumped out to a 7-3 lead after 4½ innings, but Baltimore bounced back in midgame and capped things off with a late surge.

Right-hander Jake Westbrook took the mound for the Indians on April 19; righty Rodrigo Lopez got the nod for the Orioles. Westbrook, a 28-year-old Georgia native, was in his sixth season with Cleveland after a cup of coffee with the New York Yankees in 2000. He was off to a solid start, going 2-1 with a 3.66 ERA in his first three games, but had struggled in his last start, allowing three home runs to the Detroit Tigers in a 5-1 loss.

Lopez, a 30-year-old from Mexico, was in his fifth season with Baltimore after a brief stint with the San Diego Padres in 2000 and was off to a terrible start, going 1-1 with a 5.66 ERA in three outings. Like Westbrook, Lopez had suffered a similar fate in his previous start when he surrendered three homers to the Angels in a 6-5 Baltimore victory. Neither would redeem himself on this evening.

Cleveland scored first when Jhonny Peralta belted a shot over the right-field scoreboard with two outs and nobody on in the top of the first to give the Indians a 1-0 lead. Baltimore countered with a run in the bottom of the frame thanks to Brian Roberts’ leadoff single, his steal of second, and Miguel Tejada’s single to left that knotted the contest at 1-1. Neither team scored in the second, although the Indians had Lopez on the ropes again with consecutive hits by Broussard and Ronnie Belliard that put runners at first and second with no outs. Todd Hollandsworth struck out and Aaron Boone lined into a double play to end the threat. Westbrook set the Orioles down in order in his half of the inning.

Cleveland took a 4-1 lead in the top of the third when Sizemore doubled to right and came home when Lopez slipped during his delivery to Peralta and tossed a wild pitch, sending Sizemore to third. When catcher Ramon Hernandez tried to throw him out, the ball got past third baseman Melvin Mora and rolled into left field, allowing Sizemore to break the tie. Peralta walked and Martinez launched a 400-foot homer into the right-center-field bleachers to give the Indians a three-run lead.

Corey Patterson led off the bottom of the third with a bunt single and Roberts was awarded first on catcher’s interference. Jeff Conine plated Patterson and sent Roberts to second with a single to center, then Roberts stole third and scored on Mora’s line single up the middle. Tejada grounded into a double play and Jay Gibbons grounded to second to end the inning. Lopez and Westbrook faced four batters each in the fourth, but none scored. The former would face only four more batters before coming out in favor of veteran left-hander John Halama.

Sizemore walked to lead off the top of the fifth and went to third when Jason Michaels bunted to first for a hit and first baseman Kevin Millar committed a throwing error. Peralta fanned, but Travis Hafner blistered a double to deep left to score Sizemore and Michaels, and went to third on the throw to the plate. Halama replaced Lopez and the southpaw struck out Martinez for the second out of the inning before surrendering a run-scoring single to Belliard. He fanned Hollandsworth to stop the bleeding, but Cleveland’s lead ballooned to four.

That proved to be the highlight of Cleveland’s evening. Conine, Mora, and Tejada rapped out consecutive one-out singles in the bottom of the fifth to cut the deficit to three. Gibbons flied to left, but the Orioles’ rally continued. Hernandez singled to right and scored Mora, and Javy Lopez ripped a two-bagger to left that plated Tejada and forced Indians manager Eric Wedge to make a decision. Rather than go with Matt Miller, who had been warming in the bullpen, Wedge chose to stick with Westbrook and Millar made him pay with a shot to center that cleared the glove of a diving Sizemore and bounced over the fence for a double that gave Baltimore an 8-7 lead.

Wedge called for Miller, but Patterson, acquired from the Chicago Cubs during the offseason, deposited Miller’s second pitch into the right-field bleachers for his first homer as an Oriole. Miller walked Roberts before finally ending the inning with Conine’s groundout. Baltimore had a 10-7 lead that it would never relinquish and Orioles skipper Sam Perlozzo lauded his squad. “They really showed me some character tonight,” he told reporters. “I know when they came into the dugout and it was 7-3, they were still chirping about coming back.”1 They weren’t through, but Cleveland wasn’t giving up.

Boone blasted a homer off Halama to lead off the top of the sixth and when Halama allowed a one-out single to Michaels, Perlozzo replaced him with 26-year-old rookie Sendy Rleal, who easily got out of the inning. The Orioles extended their lead to 13-8 when Mora doubled to left, knocking Miller from the game in favor of Rafael Betancourt who allowed a single to Tejada and a three-run homer to Gibbons. Lanky righty Jason Davis took over for Betancourt and retired the next three Orioles to send the game to the seventh.

Rleal handily retired the side and Danny Graves, Cleveland’s fifth pitcher of the game, returned the favor and set Baltimore down in order in the bottom of the inning. Eddy Rodriguez replaced Rleal in the top of the eighth and surrendered Cleveland’s ninth and final run when Hollandsworth poked a double to right, went to third on a sacrifice fly, and scored on Sizemore’s fly to left. The Orioles exacted revenge for the previous game’s beating by pouring five more runs over the plate in the bottom of the inning with help from shoddy fielding by the Indians. “If a lopsided loss to the Cleveland Indians didn’t raise the Baltimore Orioles’ ire, it certainly awakened their bats,” wrote the Los Angeles Times.2

Graves coaxed Mora to ground to Peralta, who booted the ball for an error, then Hollandsworth misplayed Tejada’s fly ball into a miscue that allowed Mora to score and sent Tejada to second. Gibbons who sent Tejada to third with an infield single, and pinch-runner Nick Markakis, Tejada, and Hernandez trotted home on Hernandez’s second homer of the season. Lopez whiffed for the first out, Millar singled to left, and was erased at second on Patterson’s fielder’s choice before singles by Roberts and Conine scored Patterson to give Baltimore an 18-9 lead.

Scott Sauerbeck relieved Graves and got Mora to fly to right for the final out. Chris Gomez replaced Millar at first base, Markakis went to right field, and Ramon Vazquez pinch-hit for Peralta to lead off the ninth. Vazquez lined to first to begin the frame, Hafner struck out looking, and pinch-hitter Kelly Shoppach singled to center. But Rodriguez fanned Broussard to close out the 18-9 victory.

“You can get waxed like we did last night and come back and put a performance together like we did tonight,” Conine said after the game. “It’s a good thing, and it does a lot for your confidence.”3

3 “Orioles Double Up on Indians, 18-9.” The 18 runs were the most by the Orioles since they scored a team-record 23 against the Toronto Blue Jays on September 28, 2000. The confidence the O’s might have gained from their win that ran their record to 9-7 didn’t last long and they finished the season with a 70-92 record, below .500 for the ninth straight season.