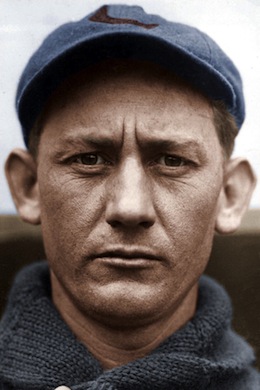 During the 2017 baseball season, the Chicago Cubs surpassed 8,000 regular-season games played at Wrigley Field. The season included the raising of the team’s first World Series championship gained while calling Wrigley Field home. A century earlier, the Cubs played their first game at Wrigley (then called Weeghman Park), to a packed Chicago crowd that couldn’t wait to see their new Cubs. The fans have flocked to that “nice little place on the north side”1 ever since. This is the story of that very first game, on April 20, 1916, when James Crusinberry of the Chicago Tribune observed that it was “quite convincing that the Cubs have found a welcome to the north side.”2

Crusinberry described the “newness and a curiosity of things” that characterized the day. “It was the first time many of the players and doubtless many of the fans had ever seen the north side ball park.” Weeghman Park had been around since 1914, when it was home to the Chicago Federals, later named the Whales, of the short-lived Federal League. When the Federal League disbanded, owner Charles Weeghman coaxed the National League Cubs to his steel and concrete park at 1060 West Addison Street. “They seemed to have no trouble finding it,” Crusinberry wrote,3 and fans have found their way ever since. The estimated 20,000 spectators started flooding in from noon until game time at 3 P.M. A “gang of carpenters”4 had constructed a row of seats on the field in front of the grandstand, and “a double row of benches circled the outfield.”5

A mile-long parade stretched from downtown to the ballpark with every car bearing a banner. More than 200 Cincinnati fans made the journey north, with Reds President Garry Herrmann part of the caravan, and they participated in the parade as well.6 A half-dozen bands performed, some playing even when Judge Scully was giving opening remarks (which few could hear). Explosions were heard in center field when the American flag was raised. A black bear was led to home plate by “expert” Cy De Vry of the Lincoln Park Zoo and performed tricks for the crowd.7 Fans were, as they would for decades to come, watching the game from the rooftops across the street.8

The world was at war, and the United States teetered on the brink of joining it. President Woodrow Wilson had just given an ultimatum to Germany’s Kaiser Wilhelm II to stop its submarine warfare or suffer “a severance of diplomatic relations,” wrote the Tribune, its headline reading “Final Word to Kaiser. Nation Awaits Berlin’s Reply.”9 But the world was on hold for at least a day in Chicago. “Whatever the Kaiser has to say to Woodrow Wilson today,” wrote Crusinberry on the eve of Opening Day, “doesn’t go on the north side in Chicago, because this is the day when the new Cubs have their grand opening at Weeghman Park.”10

Claude Hendrix, a six-year veteran, was taking the hill for Chicago. Hendrix had dropped a 4-3 decision in Cincinnati on Opening Day, six days earlier. Hendrix was 87-56 lifetime. He was opposed by Pete Schneider in a return matchup from Opening Day. Schneider, in his third season, had lasted only three innings on Opening Day and took a no-decision. Hank O’Day and Mal Eason were the umpires.

The Reds wasted no time as Red Killefer laced a single to left on the first pitch of the game. Buck Herzog sacrificed him to second. After a fly out by Hal Chase, Hendrix walked and back-to-back Texas Leaguers over second scored the two runners. Cincinnati led 2-0.

Chicago tied the score in its half of the first. Cy Williams singled to right, sending Max Flack to third with Williams taking second on the throw. Schneider caught the relay to third and in his haste to nab Williams, threw the ball into right field. Flack scored and Williams went to third. Vic Saier’s infield single scored Williams.

Chicago took the lead in the fourth when William Fischer doubled with two out and scored on Steve Yerkes’s single. The Reds rallied to take the lead back in the fifth when Cubs shortstop Eddie Mulligan booted a couple of grounders and two runners scored on Herzog’s single. Cincinnati led 4-3. They extended the lead to 5-3 in the sixth on a home run by Johnny Beall “over the right wall and clear across Sheffield Avenue on the front porch of a flat building.”11 Fischer of the Cubs was robbed of a hit in the bottom of the sixth when Tommy Griffith “raced to the foul line and stabbed a line drive with one hand just before the ball hit the earth.”12

Hendrix lasted until he got into a bases-loaded jam in the seventh. Manager Joe Tinker removed him for Tom Seaton, who struck out Baldy Louden to end the threat. In the top of the eighth, Jimmy Lavender allowed a walk and singles by Killefer, Herzog, and Chase to add an insurance run for the Reds, who now led 6-3.

Chicago fans often learned over the next 100 years that the Cubs were never out of a game, so it is appropriate that they would play come-from-behind baseball in their inaugural game at their new home. In the eighth, Saier doubled, and a single by Mickey Doolan (who had replaced Mulligan at shortstop) drove Schneider from the game. Fred Toney came in from the bullpen and yielded run-scoring singles to Fischer and pinch-hitter Jimmy Archer as the Cubs cut the lead to 6-5.

Limb McKenry came in to pitch for the Reds in the ninth. Flack led off with a double. Williams sacrificed him to third and Heinie Zimmerman tied the game with a double. In the Cincinnati Enquirer version by Jack Ryder, Reds outfielders would have caught these doubles “if the seats had been out of the way.”13 The ground rules, “which allowed only two bases on a hit into the slim crowd that surrounded the outfield,” were to blame, Ryder wrote. “Two or three of the Cub doubles would have been caught on an open field, while a couple of Red long boys would have gone for three bases under normal conditions.”14 Left-hander Al Schulz was summoned from the bullpen to prevent further damage. The game remained tied through the 10th.

With one out in the Cubs’ 11th, Williams “poled one into the right field crowd”15 for a double, and Zimmerman was walked intentionally. Williams scored the winning run on Saier’s line-drive single over second base just after 6 P.M.

The Cubs had a memorable win on Opening Day, their first in the history of Weeghman Park/ Wrigley Field. It was probably accurate reporting by Crusinberry that it was the “biggest and noisiest” Opening Day in Cubs history to that point.16 Gene Packard picked up the victory with three scoreless innings in relief, while Schulz took the loss.

The extra seats were not actually needed but “a straggling hundred or two of rooters were allowed to file out there and sit down, though there was plenty of room in the stands,” the Cincinnati Enquirer griped. “But for these obstructions, which were quite unnecessary, the Reds would have won the game handily.”17

The memorable first game was also witnessed by a man who would see thousands of others over the next 59 years. Pat Pieper became the Cubs’ public-address announcer, a position he held until his death in 1974. Before the days of a microphone, Pieper called out the starting lineups with a megaphone. “Carrying that megaphone (it weighed 14 pounds) and walking up and down in front of the stands could really take something out of you,” Pieper said decades later. “A lot of times I lost five or six pounds during a game.”18

On that day he welcomed Cubs fans to their new home on the north side, and was part of a tradition that continues to this day.

1 George F. Will, A Nice Little Place on the North Side: Wrigley Field at One Hundred (New York: Crown Archetype, 2014).

17 “Notes of the Game.,” Cincinnati Enquirer.