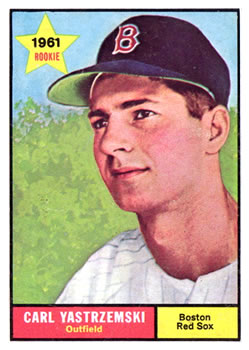 On his first day as a pro, he was listed in the box score as “Y’trzy’ski, ss.”

Carl Yastrzemski was just 19, his lengthy last name not yet familiar to sportswriters and official scorers, when he played his first professional game with the Raleigh Capitals of the Class B Carolina League. He’d left the University of Notre Dame to sign a $100,000 bonus contract with the Boston Red Sox as an infield prospect.1

It would be a stretch to suggest that Yastrzemski’s performance in his very first game foreshadowed the 23-season Hall of Fame career that saw him rack up 3,419 hits, 452 home runs, three batting titles, a Triple Crown, seven Gold Gloves and an American League Most Valuable Player Award. Still, the highly touted rookie contributed a run-scoring single and two outstanding defensive plays, helping his team to an Opening Day win.

Yastrzemski and his teammates had to wait an extra day to begin their season, as rain washed out a scheduled April 21 opener in Raleigh.2 Instead, the Capitals began the campaign the following night against the Wilson Tobs, a Pittsburgh Pirates farm team. The name Tobs was an abbreviated form of “tobacconists,” reflecting the area’s agricultural heritage.3

News reports indicate that Capitals manager Ken Deal thought highly of both shortstops on his roster – rookie Yastrzemski and 25-year-old Jimmy Knerr, who had played while in military service the year before.4 Deal’s plans changed quickly. Yastrzemski ended up playing 104 games at second base and only 12 at shortstop as another future major leaguer, Al Moran, handled the bulk of the shortstop duty. Knerr made only six appearances with Raleigh before being sent to the Alpine (Texas) Cowboys of the Class D Sophomore League, another outpost in the Red Sox organization. It was the second and final season of his professional career.

In addition to Yastrzemski, who batted second, two future big leaguers appeared in the Capitals’ lineup. Chuck Schilling played second base and Russ Gibson started at catcher. The start on the mound went to 25-year-old right-hander Ted Ellis, who had posted an excellent 11-1 season at Class D Lexington in 1956 and then entered military service.5 In 1959 Ellis went 2-2 with a 6.00 ERA in 15 games at Raleigh; demoted to Class D Alpine, he went 14-4 the rest of the season.

The Tobs started three future big leaguers – Donn Clendenon at first base, Larry Elliot in right field, and Elder White at second base. Also in the lineup was 29-year-old catcher-manager Harding Peterson, known as Hardy and Pete, who had appeared with Pittsburgh in parts of three previous seasons and would play two final games there in 1959. Peterson spent nine seasons as a skipper in the lower rungs of the Pirates chain before assuming leadership roles in the Pittsburgh front office, including a stint as general manager from 1976 to 1985.6 Twenty-five-year-old righty Rex Rupert got the start for Wilson. He’d gone 17-7 between Classes B and C the previous season,7 but slumped to 2-5 with a 5.89 ERA in nine games for Wilson in 1959.

Despite 40-degree cold and intermittent rain, a crowd of 950 turned out at Wilson’s Fleming Stadium. Ellis and Rupert gave the fans a “classic pitcher’s battle” for the first seven innings. The teams combined for only three hits in that span while collecting one run apiece.8

Raleigh scored its run in the third inning after center fielder Walt Napier walked. Pitcher Ellis sacrificed Napier to second, a passed ball moved him to third, and he scored as Yastrzemski hustled out an infield roller for a base hit. It was the first of 2,013 RBIs Yastrzemski collected as a professional.9 White drove in Wilson’s first run in the seventh inning after a walk and an error.10 Ellis gave up only two hits in the first seven innings – one on a fly ball that fell between two outfielders, the other on a hard-hit grounder that hopped over Yastrzemski’s head at shortstop.

The future major leaguers in the Raleigh infield distinguished themselves with strong defensive play. In the third inning, Yastrzemski grabbed a hard-hit ball that bounced high off the pitcher’s mound and fired to first for a close out. In the fifth, he went deep in the hole to retire Peterson on a grounder. And in the sixth, second baseman Schilling caught Elliot’s low line drive and started a double play.

Those fans who lingered in the cold were rewarded in the eighth inning, when both offenses finally perked up. In the top half, Rupert walked the bases full with one out and was yanked. He gave up just one hit that night – Yastrzemski’s roller – but walked six. With lefty Jack Holmes on the mound, manager Deal sent right-handed Knerr up to pinch-hit for Yastrzemski. Knerr struck out.11

Peterson swapped in a righty pitcher, Bob Vega, to face righty-swinging left fielder Tom Agosta. Vega hit Agosta on the arm with a pitch to force in a run, then gave up a two-run opposite-field single to Gibson to make the score 4-1. With future Pirate and Met Larry Foss on the mound, Gibson stole second. Catcher-manager Peterson threw the ball away, allowing another Raleigh run to score for a 5-1 Capitals lead.

Wilson’s bats came alive in the bottom half, helped by some sloppy play by Raleigh. With one out, Clendenon laced a solo home run to make the score 5-2. One out later, Ellis hit center fielder Morris Cigar with a pitch and gave up a single to left fielder Lowell Johnson. Agosta misplayed Johnson’s hit, allowing the runners to take second and third. White hit what might have been an inning-ending grounder to Knerr, who fielded the ball and turned toward second as if aiming for a force play. However, there was no runner on first. White reached safely and Cigar scored on this mental error. Reliever Dan Wooden came on, walked the next batter, then struck out a pinch-hitter to close out the inning.

The fifth and final Wilson pitcher, Bob Daniels, made the ninth inning interesting with three walks, but Raleigh couldn’t capitalize on his wildness. Wooden worked a scoreless ninth inning, surrendering no hits or walks, to seal the 5-3 Raleigh win. The winning Capitals ended the night with only two hits, while Wilson collected five.

The Capitals and Tobs went on to finish first and second in the Carolina League, with the Capitals 6½ games ahead.12 The Tobs swept the best-of-seven postseason playoff series between the two teams, with future Pittsburgh pitcher Tom Butters throwing a one-hit shutout in the finale.13

Yastrzemski hit .377 in 120 games with Raleigh – helped by manager Deal, who taught him to stand closer to the plate so he could better reach outside pitches.14 Yastrzemski led the league in hits, doubles, and batting average. A few days after his 20th birthday, he was named the Carolina League’s rookie of the year, as well as its most outstanding player.15 “Many people, including several managers, predict the Notre Dame bonus baby will be with the Boston Red Sox within a couple years,” one sportswriter reported.16 It took only one more year of minor-league seasoning, at Triple-A Minneapolis in 1960, before the man later called “Yaz”17 was in the big leagues for good.

Neither Baseball-Reference nor Retrosheet provides box scores of minor-league games, but the April 23, 1959, edition of the Raleigh (North Carolina) News and Observer published a box score.

The author thanks Adam Darowski for research assistance.

1 A short news item printed in newspapers across the United States during the 1959 season – presumably a wire service item – got his last name correct but his first name wrong. It referred to the young prospect as “Paul Yastrzemski.” One example can be found, of all places, in the Boston Globe, May 17, 1959: 74.

4 “Raleigh Home Opener Postponed Until Friday.” Knerr played a first minor-league season in 1956 with Lexington of the Nebraska State League before leaving pro baseball for the military.

6 Peterson was general manager of the 1979 World Series-winning Pirates team. He later briefly served in the Yankees’ front office, then scouted for the Blue Jays and Padres.

8 All descriptions of game action in this story are based on Joe Tiede, “Raleigh Scores 5-3 Win over Wilson in Opener,” Raleigh News and Observer, April 23, 1959: 23.

10 Tiede’s game account does not specify who committed the error. Raleigh made four errors that night – one apiece by Yastrzemski, Ellis, Napier, and left fielder Tom Agosta. The story makes clear that Agosta made his error later in the game.

11 According to Baseball-Reference’s Stathead feature, Yastrzemski started but did not finish 318 games over his 23-year major-league career. However, the Stathead search does not specify how many times he was pinch-hit for, as compared to times when he was replaced on defense, withdrew with an injury, etc.

17 A Newspapers.com search from 1960 and 1961 indicates that “Yaz” had not yet become Yastrzemski’s widely accepted nickname, with headline variations including “Yas,” “Yastro,” and “Y’ski.”