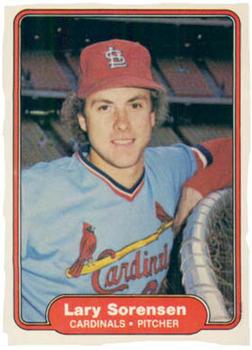 The revamped St. Louis Cardinals were off to a rousing start in 1981, winning six of their first eight games, when Lary Sorensen took the pitcher’s mound for the finale of a three-game series with the Chicago Cubs at Busch Stadium on Wednesday, April 22.

Coming off a disappointing fourth-place finish in the National League East Division in 1980 — and disheartened with the makeup of the team — Whitey Herzog, in the dual role of general manager and field manager, had overhauled the Cardinals at the winter meetings in Dallas. He engineered three blockbuster trades involving 21 players, and when Opening Day rolled around the following April, St. Louis boasted 15 players who were not on the roster at the start of the previous season.1

Among them was Sorensen, acquired in a much-ballyhooed deal with the Milwaukee Brewers on December 12, 1980. St. Louis sent pitchers Rollie Fingers and Pete Vuckovich and catcher Ted Simmons to Milwaukee and received veteran outfielder Sixto Lezcano, young pitcher Dave LaPoint, and highly touted outfield prospect David Green along with Sorenson, a 25-year-old right-hander entering his fifth season in the major leagues.

“Maybe in the future, it’ll work out for St. Louis,” Baltimore Orioles pitcher Jim Palmer said in February 1981. “Right now, the Brewers came out on top. The Cardinals got some youth in the deal, but Milwaukee got the better players.”2

Early on, Sorensen did his part to change the narrative by winning his first two starts. He got the ball for the third time to wrap up the series against the Cubs, who were floundering with an eight-game losing streak. On a cloudy, drizzly afternoon before a crowd of 10,588, Sorensen authored a four-hit shutout with no walks and seven strikeouts to boost his record to 3-0.

“I don’t want to say anything about the trade, but by the end of the year, people might not think that it was as foolish as it seemed,” said Sorensen, a 1978 American League All-Star. “Whitey must have had a reason for trading for us.”

Said Herzog: “We were just hoping (Sorensen) would be the kind of pitcher who would keep us in the ballgame until the sixth or seventh inning.”

Half of Chicago’s hits came in the first two innings — a two-out double by Steve Henderson in the first and a leadoff single by Jerry Morales in the second. Sorensen subsequently retired nine straight batters before Jim Tracy singled leading off the fifth. Sorensen set down the next 14 Cubs — Henderson reached on an infield single with two outs in the ninth — and he got Bill Buckner to ground into a fielder’s choice to close out the eighth shutout of his career. The game took 2 hours, 17 minutes to complete.

“The first time around, they don’t know what I’m going to do,” said Sorensen, acknowledging that he was in his initial season in the NL.

The seven strikeouts marked a career high to that point for Sorensen. He equaled that total once and surpassed it once (with nine), both with the Cleveland Indians in 1983. Over the course of his career, the pitch-to-contact Sorensen averaged 2.9 strikeouts per nine innings. He had deft control, issuing 2.1 walks per nine innings.

The Cardinals plated the only run they needed in the bottom of the first against Cubs right-hander Mike Krukow. Garry Templeton singled, went to third on a single by Tony Scott, and scored on a double-play groundout by Keith Hernandez. One inning later, Tommy Herr stroked a two-run triple to center field, driving in Ken Oberkfell and Lezcano to give him a league-leading 11 RBIs. The Cardinals totaled nine hits, including two apiece by Templeton, Scott, and Oberkfell.

Sorensen took care of the rest. Combined with Andy Rincon’s 8-0 shutout the previous afternoon, the Cardinals recorded back-to-back whitewashings for the first time since May 15-16, 1979, when John Denny and Bob Forsch, with Mark Littell closing out the ninth inning, blanked the Montreal Expos. “We’ve got guys who can start a little bit, much as everybody doesn’t think so,” Sorensen said. Herr said, “The way the personalities seemed to jell in the clubhouse [during spring training] made you think we could really put it together on the field.”3

The win kept the Cardinals (7-2) a half-game behind Montreal in the NL East as they embarked on a five-game road trip to Pittsburgh and Chicago. The Cubs (1-10) saw their losing streak reach 12 games en route to finishing with the league’s worst overall record (38-65) in the strike-interrupted 1981 season.

One week later, in the second game of a doubleheader at Wrigley Field, Sorensen kept the Cubs off the scoreboard for six innings while allowing only two singles. He left — because of slight stiffness in his right shoulder — with a 2-0 lead, only to see Bruce Sutter give up two runs to his former team in the seventh.4 In his next start, on May 5, Sorensen improved to 4-0 with a 4-1 complete-game victory over the Atlanta Braves at Busch Stadium, extending his consecutive scoreless innings streak to 23⅔. But it was almost a month before Sorensen won again, and he wound up going 7-7 for the strike-interrupted season despite a nifty 3.27 ERA. He worked at least six innings in 14 of his 23 starts. Rick Hummel of the St. Louis Post-Dispatch noted in his postseason report card of the Cardinals: “When the bullpen failed, Sorensen almost always was the victim. Three times in the final month of the season, the bullpen couldn’t hold leads that Sorensen took into the sixth inning or later. His seven victories could have been 10 or more.”5

The Cardinals compiled the best overall record in the NL at 59-43, but they finished in second place in the East Division in both halves of the split season that was the result of the 50-day players strike from June 12 through July 31. The second-place finishes kept them out of the postseason. In both halves, St. Louis played fewer games than the first-place teams (Philadelphia in the first half; Montreal in the second half) and could have caught or surpassed the winners with the opportunity to play the same number of games.

Lezcano batted .266 with 5 home runs and 28 RBIs in his lone season in St. Louis. He was traded to the San Diego Padres in December. LaPoint and Green spent most of the year with the Cardinals’ Triple-A affiliate in Springfield, Illinois, before being called up in September.

Fingers (28 saves), Simmons (.216 batting average, 14 home runs, and 61 RBIs), and Vuckovich (14 wins) helped the Brewers reach postseason play for the first time in franchise history, as they were the AL East second-half champions. Fingers was named the AL Most Valuable Player and Cy Young Award winner.6 Milwaukee lost to the New York Yankees in the ALDS in five games.

On November 20, 1981, the Cardinals dealt Sorensen and fellow right-hander Silvio Martinez to the Indians as part of a three-team transaction with the Philadelphia Phillies that landed Phillies outfielder Lonnie Smith in St. Louis and Indians catcher Bo Diaz in Philadelphia.

In 1982 the Cardinals and Brewers squared off in the World Series, with St. Louis winning in seven games.

In addition to the sources cited in the Notes, the author used the Baseball-Reference.com and Retrosheet.org websites for box scores, player, team, and season information, pitching game logs, and other pertinent material.