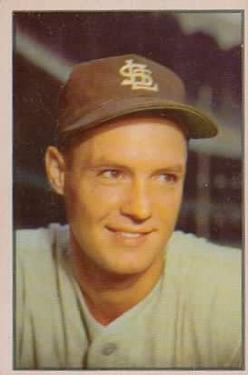 The Cleveland Indians may have been reaching for some strong mouthwash as they reported to Tucson, Arizona, for spring training in 1952. The Indians led the New York Yankees by one game when the day’s schedule was completed on September 11, 1951. Cleveland had 13 games left on its schedule, while the Yankees had 17 contests left. The Indians closed out their season with a 4-9 record. Meanwhile, the Yankees pulled out in front, posting a 12-5 record. New York won the American League pennant by five games. There was little doubt that the Indians had a bitter taste in their mouths because of their late-September slump.

St. Louis occupied last place in the AL in 1951, finishing a whopping 46 games behind New York. After four straight losing campaigns, in which the Browns finished no higher than sixth place (1948), Browns manager Zack Taylor was fired and replaced with Rogers Hornsby. Rajah was one of the great players in baseball history, having been elected to the National Baseball Hall of Fame in 1942. He was making his second tour of duty as the Browns’ manager, having been their player-manager from 1933 to 1937.

Both teams got off to hot starts in 1952. St. Louis broke out of the gate with a 5-1 record; perhaps the influence of Hornsby was rubbing off. Not to be outdone, Cleveland was 7-0 in the early going as the team headed to Sportsman’s Park for a three-game set with the Browns.

In the first game, St. Louis handed the Indians their first setback of the season, toppling the Tribe 8-3. The second game was a matchup of two pitchers who were both 1-0, Bob Feller for Cleveland and Bob Cain for the Browns. The last time the Indians got a look at Cain, the southpaw was pitching for Detroit and he defeated them 9-4 on September 22, 1951. Cain’s win contributed to the Tribe’s September slide.

Cain was all business in the top of the first inning, striking out the side. Feller showed no such result when he took the hill for the home half of the inning. St. Louis second baseman Bobby Young led off and rifled a triple that sailed over the head of Cleveland left fielder Jim Fridley. Young’s keystone partner, Marty Marion, hit a grounder between short and third. Indians third baseman Al Rosen ranged to his left, but he bobbled the ball for an error. Young scored and Marion was safe at first base.

An error was charged to Rosen, his fourth of the young season. It is interesting to note that a war or words was waged between Rosen and Hornsby during spring training. It began when Hornsby said of Rosen, “He can hurt you with a bat, but in the field, he is liable to get himself killed.”1

Of course, Rosen took exception to Hornsby’s comment.2 But with Rosen totaling four miscues in the young season, it looked as if Hornsby might have been on to something.

Ray Boone was the first Indians player to reach base, on a walk to lead off the third inning. The next batter was Birdie Tebbetts. The Cleveland backstop struck out while St. Louis catcher Clint Courtney threw out Boone attempting to steal second base.

In the top of the fifth, Luke Easter singled to center field for Cleveland’s first hit. Rosen walked to put runners on first and second base. But after Fridley popped out to the shortstop, Boone bounced into a 6-4-3 double play to end the threat.

Meanwhile Feller was also rolling along. The Browns looked to extend their lead in the bottom of the sixth inning. With two outs, Feller walked Marion and Jim Rivera, putting runners on first and second. But Rapid Robert came back and whiffed Tom Wright to snuff out the Browns’ threat.

Cain set down the next nine Cleveland hitters he faced, while Feller retired the final six. St. Louis hung on to top the Indians 1-0. The Browns raised their record to 7-1 and took sole possession of first place.3 Cleveland’s record dropped to 7-2. Game Three of the Browns-Indians series was postponed because of cold weather.4

“Yep, it feels great to win one like that,” said Cain. “It makes me recall some of the tough ones I lost to the same ballclub. I owed this one to Feller; he beat me 2-1 last year only by pitching a no-hitter. And Bob Lemon beat me 2-1 with a one-hitter. It was just my turn to get the good break.”5

The last game that had fewer hits in a nine-inning game than this game’s two occurred on May 2, 1917, at Weeghman Park in Chicago. Cincinnati’s Fred Toney and Chicago’s Jim “Hippo” Vaughn each hurled a no-hitter through nine innings. But the Reds banged out two hits and scored a run in the 10th inning to win the game, 1-0.7

St. Louis turned in an 8-6 record in April. But thereafter the roof caved in and they had five successive months with a losing record. Hornsby was fired on June 8, and was replaced by Marty Marion. The Browns finished in seventh place with a 64-90 record.

The Indians met more frustration at the end of the season, finishing with a 93-61 record. They fell short again to New York, this time by two games.

Bob Cain finished the season with a 12-10 record and a 4.13 ERA. He was most notable for pitching to Eddie Gaedel on August 19, 1951, at Sportsman’s Park, when he was with the Tigers. St. Louis owner Bill Veeck ordered the diminutive Gaedel, who stood 3-feet-7-inches, to bat lead-off in the first inning. Gaedel pinch-hit for Frank Saucier. Cain walked Gaedel on four pitches. Gaedel was removed for a pinch-runner.

But on the day he beat Bob Feller, Cain was certainly Able.

The author accessed Baseball-Reference.com for box scores, play-by-play, and other data, as well as retrosheet.org.

3 St. Louis hosted Chicago in a doubleheader on April 20. The Browns won the opener, 8-0. The second game was suspended after the seventh inning and it was completed on May 26. Chicago won 10-5.