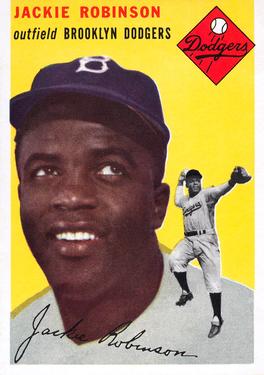 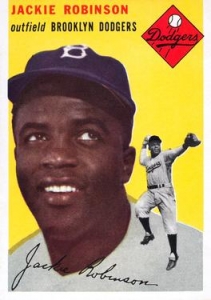 It was a season when Jackie Robinson was supposed to be slowing down. He was 35 and some critics already considered Robinson to be one of the “aging” veterans. But on this day, the small crowd of 10,574 at Forbes Field saw a thrilling 13-inning game in which Robinson doubled home the winning run and stole three bases, including home. Nearly all the fans were still there at 12:42 A.M. when the game was finally decided, 6-5 in favor of the Brooklyn Dodgers over the Pittsburgh Pirates.1

The season started with several reports of Robinson slowing down due to aging knees.2 In 1953 he had been pushed into playing left field to make room for Junior Gilliam at second base. This year’s push came from the sparkling play of Sandy Amoros, who hit a robust .421 in spring training. But Robinson helped put some of that aging talk to rest by finishing spring training with 16 hits in his last 26 at-bats, and 12 RBIs over the last eight games.3 Still, the newspapers wrote about Robinson’s age, including a prediction that he would retire at the end of the season.4 Jackie, on the other hand, was not talking retirement. He talked of leading the league in hitting, winning another MVP award, and of his goal of passing Ty Cobb’s major-league record of 21 steals of home.5 Jackie had stolen home 16 times.

Just five games into the season, however, the narrative started to change. After A 4-for-4 game against Philadelphia, which included a double and a home run, the New York Post proclaimed, “He ain’t what he used to be, that’s for sure, but Jackie Robinson can still make the wheels go ’round and ’round on occasion.”6

The starters on Friday evening, April 23, were fourth-year right-hander Bob Friend for the Pirates and reliable right-hander Russ Meyer for the Dodgers. The previous year, Meyer had won 15 games for Dodgers, finishing behind only 20-game winner Carl Erksine for the team lead in victories.

Robinson grounded out to second in the first inning. A solo home run by Gil Hodges to lead off the second got the Dodgers on the board first. In Robinson’s second at-bat, he led off the top of the fourth with a single to left field. After moving to second on Hodges’ single, he was left stranded when Roy Campanella grounded into a double play.

The Pirates tied the score in the bottom of the fourth on an RBI single by Toby Atwell. But the Dodgers came right back in the fifth with a run on a sacrifice fly by Jim Gilliam scoring Carl Furillo. Furillo had doubled to lead off the inning and took third on Meyer’s sacrifice.

Brooklyn added another run in the sixth. After Duke Snider grounded out to start the inning, walks to Robinson, Hodges, and Amoros loaded the bases. Campanella popped out to third, bringing up Furillo. On a 2-and-0 count, the Dodgers pulled off one of the most exciting plays in baseball, a triple steal, with Robinson stealing home “easily.”7 Adding to the excitement of the triple steal was the report that just before the theft, Pirates general manager (and former Dodgers GM) Branch Rickey had predicted it. Watching the threatening move by Robinson, according to The Sporting News, Rickey said, “He’s got him” (referring to Pirates pitcher Bob Friend). “He knows he can make it. He’s coming on the next pitch.”8 And off he went! It was Robinson’s first stolen base of the season, and the 17th steal of home in his career.

After the triple steal, Friend walked Furillo intentionally to load the bases again. Meyer popped out to short and the threat ended, leaving the Dodgers up 3-1.

Having walked eight batters and given up five hits, Friend left the game after the Dodgers’ seventh. In the bottom of the inning, the Pirates tied the game at 3-3. Hal Rice led off with a double, moved to third on Curt Roberts’ single, and scored on Preston Ward’s pinch-hit single. Ward’s hit moved Roberts moved to third, and he scored on Sid Gordon’s pinch-hit sacrifice fly to right off new Dodgers pitcher Jim Hughes.

The Dodgers quickly untied the score. Johnny Hetki entered the game as the new Pirates pitcher in the eighth inning. A single, an error by newly inserted shortstop Dick Cole, and a walk loaded the bases., and Gilliam’s two-run single restored the Dodgers’ two-run lead.

The Pirates got one run back in the eighth. The Dodgers threatened in ninth. Robinson singled to center field, stole second as Hodges struck out, then stole third. It was to no avail. After Don Thompson walked, Campanella struck out swinging and Furillo grounded out. Robinson was left stranded at third.

The missed opportunity looked big, but the Dodgers got some luck to keep the game going. The Bucs tied it again at 5-5 with a run in the ninth on a walk to Bob Skinner and Frank Thomas’s RBI double to left. If Thomas’s drive had carried an inch or two more, it would have been a walk-off home run. Instead, the ball hit the barbed wire on the top of the fence and dropped back into the field of play.10

The Dodgers took the lead for good in the top of the 13th inning. None other than Jackie Robinson again played the role of hero, ripping a go-ahead double off Bob Purkey. But the Pirates didn’t go quietly. Leadoff batter Dick Cole singled in the bottom of the inning, but two fly outs and a grounder ended the game. Bob Milliken pitched the final four extra frames for the winners, giving up only two hits and no walks.

Including four games at the end of the 1953 season, it was the sixth straight Brooklyn win over the Pirates. The next day, Saturday, the Dodgers ran the streak to seven with a 3-0 win. On Sunday the Pirates defeated Newcombe, 9-3, in game one of a doubleheader before losing the second game, 4-2. At that point, dating back to the 1952 season, the Dodgers had taken 43 of 49 contests against the lowly Bucs.11

The Dodgers’ 1954 season was not what the club had hoped it to be. They failed to defend their pennant and finished in second place to the New York Giants by five games. For the veteran Robinson, it was his sixth and final All-Star season. He hit .311 with 15 homers and 59 RBIs and stole just four more bases during the season. Tensions with the front office were also beginning to wear on him.12

The Dodgers series marked only the second week in the big leagues for the Pirates’ first African-American player, second baseman Curt Roberts. The Pirates had been one of eight major-league teams that had still not integrated at the end of the 1953 season.13 Roberts fielded brilliantly and hit successfully in 10 of his first 12 games.14