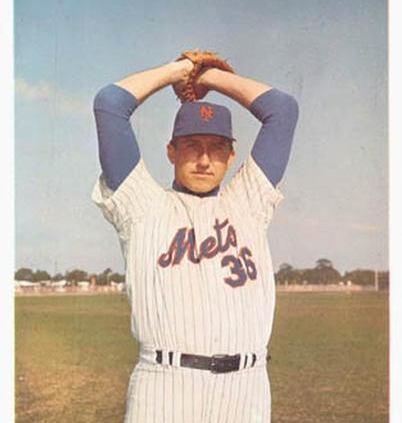 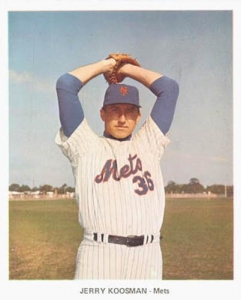 The third time’s the charm.

After going 0-2 in his first two starts for the 1969 New York Mets, Jerry Koosman reminded fans why he nearly won the previous year’s National League Rookie of the Year voting.1 On April 23, 1969, the sophomore southpaw scored his first “W” of the season with a five-hit, 2-0 shutout of the Pittsburgh Pirates. He struck out six. But the Pirates had momentum coming into the game — a 10-4 record and victories in both games of a doubleheader against the Cubs at Forbes Field right before facing the fourth-place Mets on a cold Queens night (low 50s)2 with a wet outfield.3 There was a rain delay of 20 minutes.4

Koosman’s control signaled an excellent season: 17-9 record, 2.28 ERA, six shutouts, and two World Series victories for the team dubbed the Miracle Mets. “Everything finally came back tonight,” Koosman said after the victory. “I was in the groove. I was starting to wonder and doubt myself but it all came together tonight.”5

There were plenty of seats available — 7,274 fans showed up for the Wednesday night contest at Shea Stadium, which had a capacity of approximately 55,000. Besides Koosman’s exemplary performance, left fielder Cleon Jones put on a hitting clinic with a 3-for-3 night; New York totaled six hits. Pittsburgh stranded nine runners in the game. New York, four.

Koosman got a run in the bottom of the first inning when second baseman Ken Boswell hit one of his 14 doubles that season and scored on Jones’s single. In the top of the second, the hearts of Mets fans beat faster. After Pirates third baseman Jose Pagan grounded out to second, Bill Mazeroski banged a pitch that could have been a triple, according to Daily News scribe Norm Miller, if not for Mets center fielder Amos Otis. His “great one-handed catch” sent the future Hall of Fame second baseman to the bench for Pittsburgh’s second out.6 Manny Sanguillen popped to Kevin Collins at third base to end the inning.

But the Pirates readied again for plunder in the third. Shortstop Freddie Patek struck out looking; Boswell’s error allowed pitcher and future GOP Congressman and Senator Jim Bunning to get to first base; Koosman gave up a single to leadoff hitter Matty Alou; and Ron Davis walked to load the bases.

Facing the heart of Pittsburgh’s order, Koosman escaped the bases-full threat thanks to the instincts of his batterymate, J.C. Martin. Conferring with the southpaw at the mound, he offered counsel on posture. “[He] told me I was leaning to the right,” said Koosman. “I adjusted and straightened out and everything fell in place. I feel great.”7

Facing Roberto Clemente, as formidable as Pittsburgh’s famed steel — he batted .345 in 138 games in 1969 — Koosman benefited again from Martin. Ron Swoboda caught Clemente’s fly ball to right field, but his throw forced the part-time backstop — bearing a .996 fielding percentage in 66 games that season — to make “a tumbling catch” about “30 feet to the left of home plate.”8 First baseman Bob Robertson whiffed, giving Koosman his second strikeout of the evening.

Koosman’s third K came in the fourth inning when Pagan led off with a strikeout. Mazeroski flied out to Otis and Sanguillen popped out to Boswell.

The Mets scored their second run in the bottom of the fourth; Jones smacked a double and Kranepool sent him home with a single. Bunning waded into further danger when he walked Swoboda with two outs, which put runners on first and second. But the peril ended when Collins struck out looking.

Davis struck out in the fifth inning, becoming Koosman’s fourth strikeout of the game.

Shortstop Bud Harrelson, a .248 hitter with 11 doubles in 1969, hit a one-out double in the bottom of the fifth; Boswell’s lineout to Mazeroski resulted in a double play.

With two outs in the top of the seventh and Sanguillen on first after a single, Pirates skipper Larry Shepard tried to further a rally by pulling Bunning for pinch-hitter Jerry May. His fly out to Otis quieted the Pittsburgh bench.

Pirates left-hander Jim Shellenback took over pitching duties for the rest of the game in the seventh inning and didn’t let a Mets player get on base in the seventh or eighth. Meanwhile, another hazard for the Mets began in the top of the eighth; Alou doubled and went to third on Koosman’s wild pitch with Robertson at bat; Robertson then walked. Koosman struck out Pagan to end the inning.

Mazeroski singled to left leading off the ninth but Koosman retired the next three batters, notching his sixth K of the night when Patek struck out looking.

Although Koosman acknowledged his performance, he also offered a caveat — one of his pitches had reduced impact. “I didn’t feel I had a good fastball at all,” said the left-hander. “It was cold out there and I just couldn’t seem to get my shoulder loose. My fastball had no tail; it was straight a lot of the time. I had to rely on my curveball.”9

It took 2 hours and 17 minutes for the game to be completed. Adding the rain delay, it still ended early enough for Mets fans to get home in time for the monologues of Johnny Carson and Joey Bishop. The game’s low attendance posed minimal, if any, impact on car traffic.

The Mets victory brought their record to 6-8, hardly an auspicious hint of future glory; Koosman et al. didn’t reach .500 until May 18 and then lost five straight games. They got to that level again after beating the Dodgers on June 2, which began a string of seven consecutive victories and a march toward a season record of 100-62, the National League pennant, and a World Series upset against the Baltimore Orioles.

1 Johnny Bench won the Rookie of the Year Award; Koosman came in second.