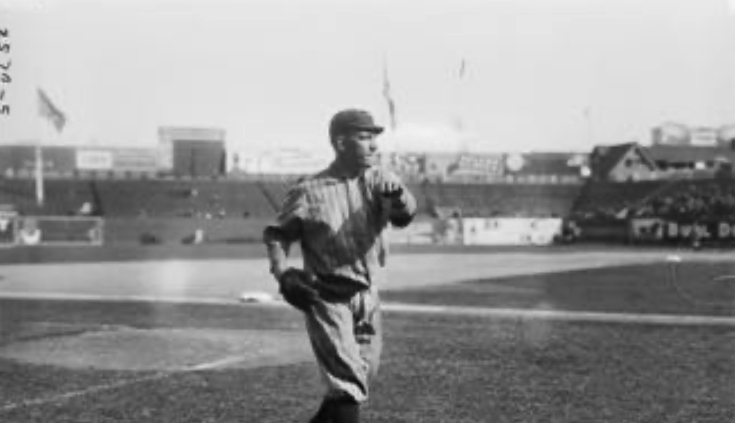 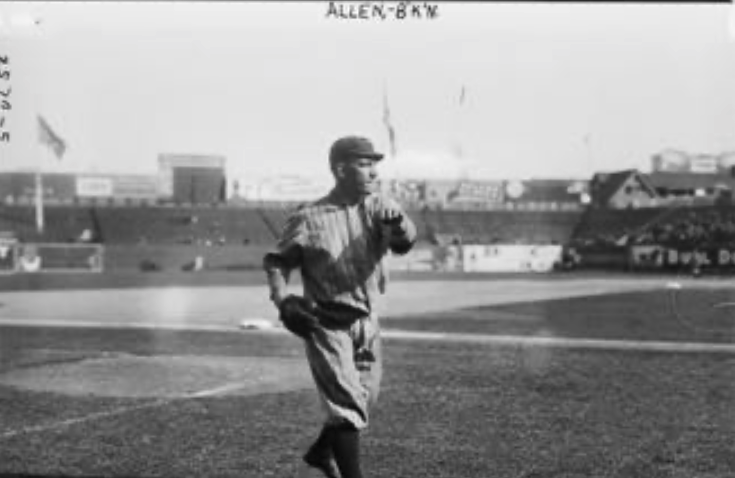 Late in the 1914 season, Brooklyn’s Ed Lafitte pitched his team to a 6-2 victory in the first no-hitter in Federal League history.1 In the second week of the 1915 season, Frank Allen of the Pittsburgh Rebels threw the first of four Federal League no-hitters in 1915.

Pittsburgh was 6-5 in the young season, in fourth place and one game out of first place in the tightly-bunched standings. St. Louis was in last place, with a 3-6 record.

Left-handed starter Frank Allen had played three seasons in Brooklyn, one with the Dodgers (1912) and one with the Superbas 1913 and 1914 with the Robins. He had never had a winning season, but when he entered the game on April 24, 2015, he already held a 3-0 record with a 1.64 earned-run average.

Groom set the Rebels down in order in the first inning. Allen, though, struggled. He walked a batter with one out. After second baseman Al Bridwell stole second base, Allen walked center fielder Delos Drake. After getting the second out on a groundout by first baseman Babe Borton, he walked left fielder Ward Miller to load the bases.2 He got out of the jam he had created by getting Terriers catcher Grover Hartley to hit a grounder and force Drake at third base.3

The game remained 0-0 and without a hit by either side until the top of the fifth inning. With one out St. Louis third baseman Charlie Deal knocked down a line drive by Pittsburgh’s Jim Kelly but threw wildly to first, and Kelly got to second base.4 Catcher Claude Berry hit a long flyout to left fielder Ward Miller, who threw out Kelly trying to advance to third.

Groom gave up a hit to right fielder Kelly in the fifth inning and one to left fielder Davy Jones in the sixth. Groom had struck out four and walked three up to this point. It was a true pitchers’ duel. Neither team had scored. And St. Louis didn’t have a hit.

To lead off the seventh inning, Brooklyn first baseman Ed Konetchy tripled for the first real scoring threat by either team. Hartley tried to pick Konetchy off third base, but the ball hit the Rebels runner in the back and bounced into the stands, and Konetchy trotted home. Kelly singled with two outs but after he stole second, he was stranded when Berry flied out.

Pittsburgh continued to hold a 1-0 lead until the Rebels came to bat in the top of the ninth inning. Third baseman Mike Mowrey led off with a single and advanced to second on an error by left fielder Miller. Konetchy bunted to Groom but instead of getting the easy out at first base, Groom tried to get Mowrey at third base; the end result was that both runners were safe. Center fielder and manager Ennis “Rebel” Oakes then hit a long fly ball that scored Mowrey and advanced Konetchy to second base. Konetchy was tagged out at third base on a ball hit to Terriers shortstop Bobby Vaughn. Kelly lined out to Groom to end the inning. The Terriers were down to their final three outs. They were still hitless.

There was a bit of excitement in the ninth inning. Right fielder Jack Tobin hit the ball back to the pitcher; Allen threw out Tobin, who disputed the call. He protested too much and was “put out of the game for kicking.”5 St. Louis manager Fielder Jones had Doc Crandall pinch-hit for Al Bridwell, and Crandall drew a walk. Harry Chapman ran for Crandall. Center fielder Oakes made a wonderful running catch on a line drive by Drake for the second out.6 Just one out stood between Allen and a no-hitter. Babe Borton ended up as the final batter in the game when his groundball to Marty Berghammer at shortstop forced Chapman at second base and Allen had his no-hitter.

Allen’s pitching gem did not draw so much as a clap from the fans in attendance, except for the people in the press box,who were the only ones who seemed to know that Allen had twirled what every pitcher dreams about, a no-hitter.7 The only cheers Allen heard were from his Rebels teammates.8

As it seems with all no-hitters, there were a couple of plays made by Allen’s teammates that kept his bid with immortality intact. In the sixth inning Jack Tobin hit a ball to deep right field; Kelly raced back and caught the ball while leaning against the fence.9 The other was outfielder Oakes’s catch of Drake’s line drive over shortstop that appeared to be no higher than six feet off the ground.10

Allen’s no-hitter was the second of the young 1915 major-league season. Rube Marquard of the New York Giants tossed a 2-0 no-hitter versus the Brooklyn Robins on April 15. After Marquard and Allen, there were four more no-hitters in 1915. Claude Hendrix of the Chicago Whales threw a 10-0 no-hitter against the Rebels on May 15. Alex Main of the Kansas City Packers tossed his gem against Buffalo on August 16, winning 5-0. On August 31 Jimmy Lavender of the Chicago Cubs no-hit the Giants, 2-0, and on September 7 Dave Davenport of the St. Louis Terriers held the Chicago Whales hitless in a 3-0 contest.