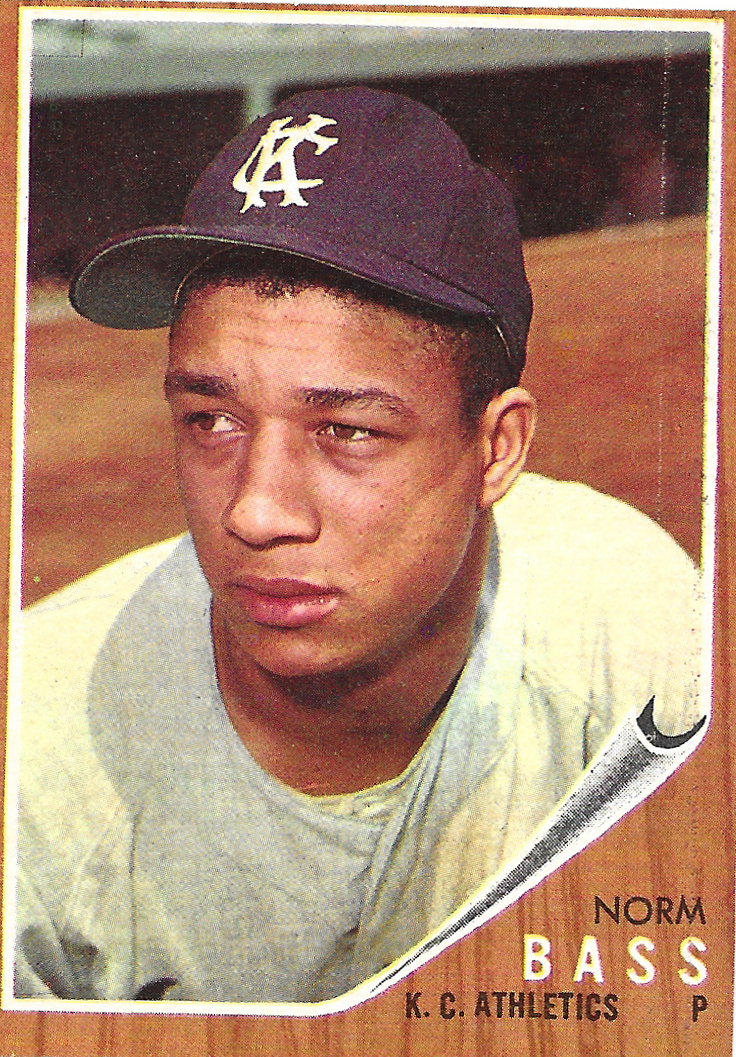 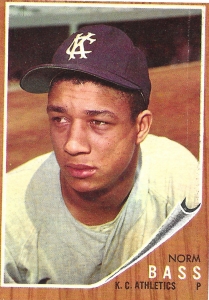 Norm Bass got a surprise when he arrived at Municipal Stadium in Kansas City before an early-season game in 1961. Ray Herbert had been scheduled to start for Kansas City that night against the Minnesota Twins, but Athletics manager Joe Gordon told Bass he would be on the mound. Gordon wanted to spring the starting assignment on Bass in a way that left him little time to be nervous.1

Nine innings and nine walks later, Bass said, “This is the worst game I ever pitched in my brief pro career.”2

But he had allowed only two runs, and his teammates supported him with 20.

The Twins, transplanted to Minnesota from Washington, had won eight of the first 10 games in their new home and were in second place, a half-game game behind Detroit, even though they had been without slugger Harmon Killebrew, who had pulled a hamstring muscle in his left leg in the team’s third game and was out for two weeks.

At 2-5, the Athletics were in ninth place, ahead of only the expansion Los Angeles Angels. In prior years the A’s had developed a reputation as a pseudo-farm team of the Yankees because of the number of good players who had been traded or in some other way shipped from Kansas City to New York.

New Athletics owner Charles Finley wanted to improve the team along with its ballpark. Finley said he put a half-million dollars into refurbishing Municipal Stadium with massive paint jobs inside and out, new restrooms, improved ramps to the upper deck, and better lighting, in addition to hiring George Toma as groundskeeper.3 He added picnic grounds in left field, the start of a number of innovative features from Finley in the coming years. “We probably haven’t got the world’s best baseball team, but we’ve got the sexiest stadium in the American league,” said Finley. “We’ve got spirit, hustle, an excellent manager in Joe Gordon, and the hardest working general manager in Frank Lane. And we’re no longer a farm club for the Yankees.”4

Finley was also offering postgame fireworks for this Tuesday night game against the Twins; nevertheless, fewer than 5,000 fans turned out. Bass — his only previous experience in the majors having come two days earlier when he faced, and retired, Cleveland’s Jimmy Piersall — gave up a hit and a walk in each of the first three innings but came away without being scored on.

The Athletics built a lead as Lou Klimchock scored in the second on a single by Haywood Sullivan, who followed up with a run-scoring triple in the third, part of a six-run rally that had started with a two-out walk by Jerry Lumpe and that knocked starter Ted Sadowski out of the game.

With two hits and three more walks off Bass in the fourth, the Twins got on the board with a pair of runs, although that was more than offset by the Athletics in the bottom of the inning.

The Twins’ Fred Bruckbauer made his major-league debut in the fourth and gave up a double to Dick Howser, who scored on a single by Jay Hankins. Lumpe walked, and Klimchock doubled to bring home two more runs. That was it for Bruckbauer.

Paul Giel relieved in the bottom of the sixth with Kansas City ahead 10-2. He didn’t do much better than Bruckbauer had, although at least Giel retired one batter out of the nine he faced. All eight who got on against him scored (one was unearned), which more than quadrupled his season earned-run average to 12.79.

The A’s closed their scoring with two in the seventh, one of them driven in by another Sullivan triple.

The 20-2 drubbing the Twins took marked the downfall of a pair of notable Minnesota-raised players.

Paul Giel had been a standout athlete in Winona, Minnesota, and he became a star in two sports for the Minnesota Gophers. In football, he finished second in the balloting for the Heisman Trophy in 1953. On the diamond, he was an All-American pitcher.

Giel stuck with baseball and received a reported bonus of $63,000 from the New York Giants.5 Under the bonus rule of the time, Giel had to stay on the Giants’ roster for two years. In the second of those two seasons, he performed well, but his career was interrupted by military service, and he never got back on track as a pitcher. The Pirates later picked him up on waivers and, early in 1961, sold him to the Twins.

He was given the honor, during the exhibition season, of throwing the first pitch in Twins history.6 In the regular season, though, he struggled.

Just over a month after the 20-2 loss to the A’s, the Twins traded Giel to Kansas City, a move that did not sit well with the Minnesota native. He considered retiring on the spot but was persuaded to join the Athletics, who put Giel into a game his first day with them. It didn’t go well. Giel gave up seven runs in 1⅔ innings, a smackdown that caused him to announce his retirement — and this time he stuck to it.

Because of his quick departure from Kansas City, Twins owner Calvin Griffith compensated the Athletics with a payment reported to be $20,000.7 Giel returned to Minnesota, worked as a business manager for the new Minnesota Vikings football team, became the sports director at WCCO Radio, and eventually served as the athletic director at the University of Minnesota.

The dénouement for Bruckbauer, another Minnesota-born pitcher, was even more stark. Bruckbauer signed with the Washington Senators after pitching for the Gophers. In the blowout at Kansas City, Bruckbauer faced four batters, didn’t retire any of them, and gave up three runs. Translated into an earned-run average (ERA), it comes out to infinity. It was Bruckbauer’s only appearance in the major leagues, leaving him with the ∞ symbol for his lifetime ERA.8

An interesting aspect is that Bruckbauer — although he was raised in Sleepy Eye, Minnesota — had been born in nearby New Ulm. One other New Ulm-born player had been in the majors: Elmer “Doc” Hamann, who pitched in one game, on September 21, 1922. Hamann faced seven batters, retired none of them, and gave up six runs. The two New Ulm pitchers share a ∞ in the baseball encyclopedias and references.

As for Bass, his first win in the majors, despite how he may have characterized it, was the start of a good season for him. He won the final game of the year, bringing his won-lost record to 11-11 and keeping the Athletics from owning last place in the American League by themselves (at 61-100, they were tied with the expansion Washington Senators).

Shoulder problems derailed his major-league and then his professional career. He was the starting pitcher in the season opener for the Dallas Rangers in the Pacific Coast League in 1964 and was credited with the win with six strong innings. But he pitched only two more games before the injuries forced him out of the game.

Bass turned to football,9 a sport in which his brother, Dick, had emerged as a star halfback for the Los Angeles Rams of the National Football League.

Norm made it to the American Football League in 1964 as a strong safety with the Denver Broncos. “I was so mad [about giving up baseball], and I wanted to play sports so bad that I went to a tryout for the Broncos,” he told Diane Pucin of the Los Angeles Times in 1999. “Understand, I hadn’t played football for almost seven years, since I was a freshman at Pacific.”10

Beyond the arm and shoulder troubles that hampered him in baseball (with diagnoses that included tendinitis),11 Bass was experiencing other maladies that weren’t as easily understood. He started the season opener for the Broncos,12 “hobbling on a left ankle that was swollen and locked, with arms that wouldn’t stretch to full extension and fingers too gnarled to catch the ball,” according to Karen Allen in a 2000 story in USA Today.13 Bass was put on waivers after the first game, his pro-football career at an abrupt end.

He made one more baseball comeback attempt,14 signing with the Los Angeles Angels organization in 1965 and getting a win for the El Paso Sun Kings of the Texas League on May 14. Within a week, though, he was back on the disabled list. The Sporting News reported, “The move resulted from what appeared to be an allergy rather than a recurrence of shoulder trouble. Bass’ hands had swollen so much that he could hardly grip a baseball.”15

Later in 1965, Bass finally found out what had been ailing him over the past few years: rheumatoid arthritis.16 For Bass, it was a chronic disease that followed him through life, leaving him with constant pain and deformities in his joints.

Bass went to work for McDonnell Douglas and spent 30 years with the company.17 In the 1970s, he was back in competitive sports as he took up table tennis. He eventually was nationally ranked in his age group.18 In the 1990s, he found out he could compete against other people who had disabilities.

In 1999 he and Joshua Bartel earned a gold medal in the Parapan American Games in Mexico City in stand-up doubles,19 qualifying for a berth in the 2000 Paralympics in Sydney, Australia, where the duo received bronze medals.

Bass was the subject of a book by his son, Color Him Father: An American Journey of Hope and Redemption.

1 Joe McGuff, “A’s Breeze by Record 20-2,” Kansas City Times, April 26, 1961: 12. Bass’s previous experience in the majors had come two days before, when he faced one batter in a game against Cleveland.

3 Toma stayed in Kansas City after the Athletics moved to Oakland and worked for the Kansas City Royals. He has been inducted into the Royals Hall of Fame.

5 According to Cary Smith in his biography of Giel, the amount of the bonus and contract was between $50,000 and $80,000 for three years. sabr.org/bioproj/person/0b986aab.

6 The Twins’ first exhibition game, at home in Orlando, Florida, was played on March 11, 1961. Giel was the losing pitcher in a 4-1 loss to Detroit.

7 The transactions information on Giel in both baseball-reference.com and Retrosheet indicates that the trade between the Twins and Athletics contained a player to be named later, which turned out to be Giel. However, newspaper reports and transaction information in The Sporting News and in the 1962 The Sporting News Official Baseball Guide has no mention of a player to be named later.

19 Athletes are ranked based on mobility; among the classifications are those for people who use wheelchairs and those who can stand.