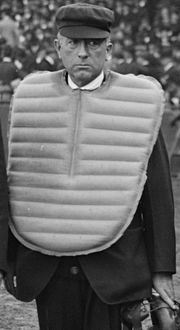 The Boston Beaneaters, under manager Frank Selee, won the National League pennant in 1897 and 1898, but finished in second place in 1899. In March 1900, Selee predicted, “My team should improve its position a peg this year. That makes us champions.”1 He had good reason to be confident. The 1900 Beaneaters had arguably the best infield in baseball, with Fred Tenney at first base, Bobby Lowe at second, Herman Long at shortstop, and Jimmy Collins at third. Right fielder Chick Stahl batted .351 in 1899. Buck Freeman, the newly acquired left fielder, led the league with 25 home runs in 1899.

The once-proud New York Giants finished in 10th place in 1899. Buck Ewing, who was the star catcher on the pennant-winning Giants of 1888 and 1889, agreed to manage the 1900 squad. Ewing expressed his optimism: “I like the material and there is no reason on earth why it should not put up such a game as has not been seen on the Polo Grounds for several seasons.”2 George Davis, the Giants’ brilliant shortstop, was named the team captain.

The Beaneaters and Giants split the first two games of their April series at the Polo Grounds in New York. The third game of the series, on Thursday, April 26, 1900, drew a crowd of 3,200 on a windy day.3 The game began at 4:00 P.M. with the temperature in the low 60s.4 The sole umpire was 29-year-old Tommy Connolly, in his third season as a National League ump. Selee chose 23-year-old southpaw Harvey Bailey as his starting pitcher; Ewing countered with Emerson “Pink” Hawley, a veteran right-hander.

Before the game, a major fire spread through a complex of three five-story apartment buildings a block south of the Polo Grounds. Trolley cars transporting fans to the game stopped short of the ballpark due to the fire. Among the passengers were George Davis, Kid Gleason, and Mike Grady of the Giants. The trio leaped from the trolley and joined the rescuers, and “worked like Trojans” helping women and children down the fire escapes. “Captain Davis went up the ladder like a squirrel” and carried a woman down who “had nearly fainted from terror.”5

Despite this pregame exertion, Davis clouted “a fierce triple” in the first inning as the Giants took a 2-0 lead.6 Neither starting pitcher was effective, and after six innings, Boston led 6-5. Charles Pittinger made his major-league debut when he relieved Bailey in the sixth inning.

Collins led off the top of the seventh with a single; Hawley walked Stahl, and Freeman sacrificed to advance the runners. Lowe grounded the ball to second baseman Gleason, who threw over the head of catcher Grady, and both Collins and Stahl scored. Long followed with a single to left field to bring Lowe home. The Beaneaters added a run in the eighth inning and led 10-5 going into the bottom of the ninth. It looked hopeless for the home team, and many fans had left the ballpark.

Charlie Hickman led off the bottom of the ninth and was hit by a pitch from the rookie Pittinger. The next two batters, Gleason and Grady, walked to load the bases. The Giants on the bench did everything they could to rattle Pittinger; they “ran on to the field, throwing their caps in the air,” danced around “like schoolboys,” and got the crowd yelling.7 Pop Foster pinch-hit for Hawley and drew a walk, forcing in a run. George Van Haltren followed with a line drive to center field that was misplayed by Billy Hamilton. Gleason and Grady scored. Foster blundered by stopping at second base, and he did not head to third until Van Haltren steamed into second. As a result, Foster was easily tagged out.

Pittinger struck out Win Mercer for the second out. With Van Haltren on second base and the Giants trailing by two runs, Kip Selbach lifted a fly ball to deep right field. It looked like an easy catch for Stahl “until the stiff breeze caught it and curved it just over the ropes” for a home run.8 The score was now tied, 10-10. Davis struck out to end the inning.

Bill Carrick took the mound for the Giants in the top of the 10th inning and was ineffective as the Beaneaters tallied three runs to take a 13-10 lead. Selee put Vic Willis in to pitch for the Beaneaters in the bottom half. Willis was the ace of the Boston staff; in 1899 his record was 27-8 and his 2.50 ERA led the league. The Giants felt they could not rally against Willis, and with darkness approaching, they “began a series of kicks, protests and prayers to the umpire … to get him to call the game.”9 If Connolly called the game before the bottom of the 10th inning was completed, the three runs scored by Boston in the top half would be erased, and the game would be declared a tie.

“Capt. Davis and his men delayed the proceedings by every means in their power. They lighted pieces of paper to look for their bats and refused to take their places at the home plate until threatened with a forfeiture by the umpire. They had consultations among themselves and argued with Connolly. … The spectators took part in the paper-burning act, and at one time there were fully fifty small bonfires burning at once in the grand stand and bleachers.”10 (“The police tried to stop this, as there was danger of setting fire to the stands, but they were only partly successful.”11) “The Giants and spectators were dancing and howling like so many Dervishes and the shouts of ‘Call the game!’ echoed” through the ballpark “like a banshee’s wail.”12

These “unsportsmanlike tactics” worked.13 The sun officially set at 6:52 P.M.,14 and with two outs and two men on in the bottom of the 10th inning,15 Connolly called the game at 6:55. The final score was Boston 10, New York 10. Connolly fined Grady, Selbach, and Jack Doyle $5 each “for kicking and delaying the game.”16

“The Boston contingent became furious because the game was not forfeited to them on account of the unwarranted delays caused by the New York team. Tenney was particularly abusive, and followed Connolly to the dressing room, declaring that his team had been robbed.”17

The Boston Daily Globe called it a “baseball farce” and claimed there was “plenty of light” when the game was called.18 The New York Sun conceded that it was “almost dark, but had the New York players not resorted to dilatory tactics, the game could have been finished much sooner.”19 Connolly said, “I simply refused to call the game as long as there was light enough for me to see the plays. When I couldn’t see them, I stopped the contest.”20

Three weeks later Connolly resigned his position as a National League umpire, citing “the vilest kind of abuse” he received “from the players ever since the season opened.”21 He umpired in the American League from 1901 to 1931, and he was the supervisor of AL umpires from 1931 to 1953. Connolly and Bill Klem were the first umpires inducted into the Baseball Hall of Fame.22