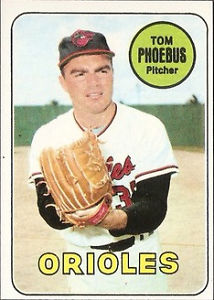 Hometown boy makes good. This time-honored cliché certainly applies to Orioles pitcher Tom Phoebus, who was born and raised in Remington, a predominantly Italian neighborhood in the northwestern section of Baltimore. After receiving a $6,500 signing bonus from the Baltimore Orioles in 1960, Phoebus established himself as one of the future stars in the Birds’ fertile farm system. On August 15, 1966, while pitching for the Rochester Red Wings, he threw a no-hitter against the Buffalo Bisons. A few weeks later, he was called up to the Orioles.

The 5’8” 185-pound right-hander tossed shutouts in his first two major league starts, only the seventh pitcher since 1900 to accomplish this feat. Then in 1967 Phoebus had an outstanding year, going 14-9 with a solid 3.33 earned run average. To top off his excellent season, he was named “The American League Rookie Pitcher of the Year” by The Sporting News.

Phoebus was the O’s winning pitcher on opening day in 1968, defeating Oakland 3-1. On April 27, the Orioles were scheduled to play the second of a four-game series against the defending American League champion Boston Red Sox at Memorial Stadium in Baltimore. Pheobus, now 2-1, was listed as the starter but his status was up in the air after he had to leave the ballpark in the middle of the game the night before due to sickness. The next morning, Phoebus spoke with manager Hank Bauer on the phone in regard to his availability to pitch that day. Shaking off the effects of a severe cold and sore throat, Phoebus told Bauer he was ready to go.

Saturday, April 27, was a cool and overcast day with the temperature hovering around 60 degrees. Intermittent rain showers throughout the morning and early afternoon led to an hour and 23 minute delay before home plate umpire Frank Umont finally called “play ball.” There were 3,147 paid customers in the stands along with an additional 11,568 children and their parents who were part of the “Safety Patrol Day” crowd.

The 26-year old Phoebus, who hadn’t pitched in a week, ran into trouble in the top of the first inning. With one out, he walked Red Sox third baseman Joe Foy, who took second on a wild pitch to batter Carl Yastrzemski. Foy then tried to steal third but was cut down by catcher Curt Blefary on what Lou Hatter of the Baltimore Sun described as “A flawless peg to [Brooks] Robinson.” 1 Blefary was filling in for first-string catcher Andy Etchebarren, who was struck on the hand by Red Sox pitcher Lee Stange the night before. Blefary, the 1965 American League Rookie of the Year, was listed in the Orioles media guide as an outfielder/first baseman. This was only the fourth time he appeared as a catcher in a major league game.

From that point on, Phoebus found his groove, although a bit of controversy arose in the Boston half of the third inning. With two out, Red Sox second baseman Mike Andrews hit a high chopper back up the middle that tipped off the top of Phoebus’ glove. Oriole shortstop Mark Belanger charged in and gathered up the ball on the run just behind the mound. Making an off-balance toss, Belanger’s throw landed in first baseman Boog Powell’s mitt just before Andrews crossed the bag, first base umpire Bill Valentine signaling out on the play. Andrews along with Red Sox manager Dick Williams and first base coach Bobby Doerr argued vehemently with Valentine over the call. Andrews was so upset he slammed his batting helmet on the ground, the carom narrowly missing Valentine. This led to Andrews’ ejection as the embattled arbiter felt that the Red Sox second baseman had intentionally tried to hit him with his helmet.

For the remainder of the game Phoebus had the hard-hitting Boston lineup at his mercy. The Red Sox next chance for a hit came in the seventh inning but another fine play by Belanger on a Joe Lahoud check swing grounder kept Phoebus’ no-hitter intact.

With one out in the top of the eighth, Boston shortstop Rico Petrocelli drilled Phoebus’ first offering towards the hole between short and third. Brooks Robinson, manning the hot corner, instinctively dove out to his left, fully extended, and snared the scorching liner just inches above the ground. In regard to his remarkable play that saved the no-hitter, Robinson told Doug Brown of The Sporting News, “Petrocelli got out in front of the ball and it curved back toward me. Otherwise, I never would have had it.” 2

Robinson’s grab was considered to be the defensive gem of the game by Phoebus, who retired the next four batters, including Joe Foy, who struck out to end the game. Phoebus threw 110 pitches, fanned nine, and walked three. It was the third no-hitter thrown by an Oriole pitcher since Baltimore rejoined the American League in 1954.

The Birds scored four times in the third and once in the fifth off Red Sox starter Gary Waslewski. Garry Roggenburk relieved Waslewski in the sixth. He finished out the game, allowing one more Baltimore run in the eighth inning.

Brooks Robinson broke the game open in the third inning with a bases-loaded double down the rightfield line that plated three runs. Oriole second baseman Davey Johnson compiled three hits on the afternoon including a double and 2 RBI. Helping his own cause, Phoebus garnered two singles and he drove in a run.

Blefary spoke to sports writer Jim Elliot of the Baltimore Sun after the game, “There is no doubt that this is my biggest thrill in baseball, primarily because I never caught the guy before. Tom was simply fantastic-unbelievable. He made it easy-threw everything for a strike-fastball, curve and slider. He had great stuff-great stuff. After the fourth inning, he popped the ball where he wanted to.” 3

On the Boston side there were still lingering hard feelings over the Andrews play at first. However, manager Dick Williams, who had longstanding ties with the Baltimore organization, didn’t want to take anything away from Phoebus. When asked about the play by a reporter after the game, Williams remarked, “No comment. You go write about that no-hitter. We were overmatched. Give him credit. He should get an awful lot of ink. And give Brooksie credit for his catch and Blefary caught a helluva game. That was a helluva throw he made to get Foy trying to steal third in the first. Foy got a big jump too. It was a big play and Blefary barely got him.” 5

Red Sox first-base coach Bobby Doerr was equally impressed with Phoebus, saying, “He was getting his curveball over exceptionally well. The way he was throwing his fast ball, you couldn’t lay for that breaking stuff. There are five or six guys in our lineup who are hitting well and he stopped them all. Only one ball was hit well all day and that was Petrocelli’s.” 6

The hero of the day, Phoebus, told the Baltimore Sun, “This is a great thrill-my greatest. I’ll tell you especially to get it against Boston. The Red Sox are the champs and they are a great hitting team so it would have to be a double thrill to beat them. I felt a little pressure in the ninth and decided I would just try to get the ball over. With that defense behind me, it was the only thing to do.” 7

The following afternoon, Phoebus was presented with The Sporting News Rookie Pitcher of the Year Award (for 1967) at Memorial Stadium. According to The Sporting News, Oriole personnel director Harry Dalton tore up Phoebus’ contract the next day and wrote out a new one. The Baltimore Sun noted that he received a well-deserved $1,000 bonus for tossing the no-hitter.

The author watched this game on TV at his home in Baltimore with his grandfather, former Oriole Jimmy Lyston.

George Henderson, interview with author, April 1, 2014. Mr. Henderson was a coach and recruiter for the Leone’s baseball team. He was also the Orioles scout who signed Phoebus in 1960.