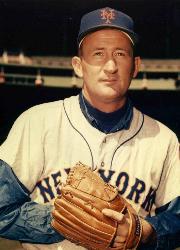 The end of a terrible era, the absence of National League baseball in New York, was at hand. After four intolerably long seasons, young and old alike, who Dick Young of the New York Daily News tabbed the “New Breed,” could see their National League heroes in the flesh.

The New York Mets had arrived, and, unfortunately for them and their fans, were off to a very bad beginning. They had lost their first nine games and their sole win had occurred on the road in Pittsburgh. The home folks had yet to see a win.

Saturday, April 28, 1962, was a beautiful day for baseball, and going into the season, it was expected that the visiting Philadelphia Phillies, who had finished dead last the prior season, could be easy prey for the Mets.

It was fairly simple to get a ticket for a Mets game at the Polo Grounds in 1962. The Mets only drew 922,000 in their first season, and many of those came to see the Dodgers and Giants. On April 28, 1962, it was especially easy for the ladies who got in for free on “Ladies Day.” The attendance was announced at 16,987, 10,978 who paid their way in, and most of whom had arrived at the ball yard in Harlem via subway.

The Phillies batted first, of course, and one thing that was obvious was that their uniform numbers took into consideration that some of the spectators may be visually challenged. Large maroon figures emerged from the gray road uniforms of the visitors.

In that very first inning, the fans got to see four of the Phillies players cross home plate as the visitors raced to an early lead. It was ugly for the Mets as starter Jay Hook, who had secured the Mets’ first-ever win earlier that week, yielded a walk to Tony Taylor and a single to Johnny Callison before Tony Gonzalez pulled a homer down the right-field line to put the Phils up 3-0, three batters into the game. Don Demeter, made the score 4-0 with the Phil’s second homer of the inning. Demeter’s blast landed atop the left-field roof.

When Clay Dalrymple followed Demeter’s homer with a single, manager Casey Stengel signaled for Bob Miller to come in from the bullpen. This was Robert L. Miller, who was at one time known as Robert Gemeinweiser. Mr. Miller, you might say, was well-travelled. In his 17-year career, he made 12 stops, and played for 10 different teams. He wore 16 different uniform numbers and Mets aficionados remember him as one of two Bob Millers to play for the 1962 squad.

Miller calmed things down and the Mets tried to climb back into the game. Charlie Neal sliced a ball down the right-field line that carried over the wall for a home run off Jim Owens leading off the second inning to put the Mets on the scoreboard. But the Phillies reclaimed the four-run advantage when Dalrymple homered off Miller in the fourth inning. After Miller was removed from the game for a pinch hitter in the bottom of the fifth, Dave Hillman entered the game for the Mets and was greeted by Demeter’s second homer of the game. The score was 6-1, and it appeared as if the Mets would go down to defeat for the 13 th time in their brief 14-game history. Phillies manager Gene Mauch made a defensive replacement, removing Wes Covington and inserting Billy Klaus.

As chronicled by Dick Young, “So it was 6-1 and you’d think the fans would go home, or boo, or throw things. Not The New Breed.”1

And then, as if by the sheer force of a young boy’s wishes, the Mets awoke. After a walk to Gus Bell, the fans erupted and cheered the team on. Frank Thomas launched his fifth homer of the season to the seats in left field to pull the Mets within three runs of the lead. Thomas would go on to hit 34 homers in the season, establishing a single-season Met record that would last until 1975. Charlie Neal followed with his second homer of the game, this one landing atop the roof in left, knocking sore-armed Jim Owens out of the game. Jack Hamilton entered the game and Gilbert Raymond Hodges of Brooklyn greeted him with the third consecutive Mets homer and the Amazin’s were within a run of the lead. The blast was estimated at 450 feet and landed in the upper deck in left field. To one observer, it was a blast reminiscent of the days of glory.2 The Polo Grounds jutted out severely from about 250 feet down the line to well over 400 feet in left-center field. Hodges himself “never thought it would go in (to the seats). Not that far out there. I was just praying for it to hit the wall so I could get on, the way I have been going.”3

Hodges was in the twilight of his career, and the homer, his second of the season, gave him a career total of 363. He finished the season and his career with 370, one better than Ralph Kiner, who was in the first of his more than 50 years as an announcer with the team. At the time, it gave Hodges more homers than any other right-handed hitter in National League history. The record was short-lived, as Willie Mays, who had hit his first Polo Grounds homer on May 28, 1951, hit the 371 st of his 660 National League homers on April 19, 1963.

The Mets would not have another base hit in the sixth inning, but they would take the lead. With one out, Frank Sullivan, who had replaced Hamilton, walked catcher Chris Cannizzaro (or Canzinari as he was called by Stengel), and John DeMerit was sent into the game to run for Cannizzaro. Next up was pinch-hitter Sammy Taylor, who also was walked and also was replaced by a pinch runner, Rod (or “Runner Rod” as announcer Bob Murphy loved to call him) Kanehl. A grounder to the first baseman by Rich Ashburn advanced the runners to second and third. That brought up Ed Bouchee, pinch-hitting for Elio Chacon against new Phillies pitcher Chris Short. By this point even the most ardent of grandstand scorekeepers was on the verge of throwing in his pencil. Short, on his first throw of the game, uncorked a wild pitch. DeMerit scored easily from third, and Kanehl scampered home from second base with the lead run. Kanehl, when interviewed after the game, indicated that coach Solly Hemus had given him the green light rounding third. Hemus was of another opinion. The throw from catcher Dalrymple to pitcher short seemed to have Kanehl nailed. However, “the pitcher was a little lax,”4 and Kanehl’s hook slide eluded the tag and the Mets had the lead.

Roger Craig took the mound for the Mets in the seventh inning and pitched the final three innings, allowing only one hit, to get his first victory as a New York Met. The Mets gave him an insurance run in the eighth inning as Jim Hickman homered off of Ed Keegan for the Mets’ fifth homer of the game. Hickman had replaced Rich Ashburn in center field in the top of the inning. It was Hickman’s first major league homer. Over the course of his five years with the Mets he had 60 homers.

Harold Rosenthal, in the next day’s Herald Tribune, summed things up. “They racked up a six-run inning, batted around, and ran the bases like derviches, while, in the dugout, Casey Stengel did everything but blow goofus powder into the eyes of the opposition. . . . He selected pinch runners like a French chef selecting pullets for a state feed and he came up with a dish just as tasty.”5

It can truly be said that the win was a team effort. At one point or another, 19 Met players were in the contest.

After the win, Casey Stengel jogged all the way to the clubhouse in deepest center field.6 There, he was greeted and congratulated by M. Donald Grant, the Mets president. “This is the greatest thrill of all. Those fans make all the others in the world look sick.”7

In addition to the sources listed below, box scores for this game can be found at Baseball-Reference.com and Retrosheet: