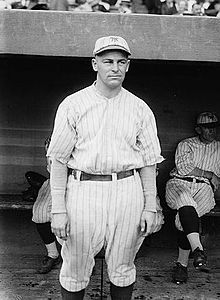 The defending 1921 World Series champion New York Giants were in Boston to close out the first month the 1922 season, playing a four-game series against the Braves. Boston (3-9) found itself in seventh place in the National League, already seven games behind the first-place Giants (11-3). New York, which had won the first game of the series the day before behind Art Nehf’s complete game, “continued their merry way at the expense of the Braves.”1 A crowd of 7,500 turned out for the game, played at Braves Field.

Giants manager John McGraw tagged Shufflin’ Phil Douglas to make the start. Douglas had been nursing a sore arm but “announced this afternoon that he was ready to pitch again.”2 The right-hander was making his fourth start of the season, and in his three previous starts, he had allowed a meager three earned runs in 21 innings pitched. For the Braves, Dana Fillingim got the nod. The lefty was making his fifth appearance (second start) and sported a 3.26 earned-run average.

The Giants started the scoring in the second inning. New York’s Daily News described Fillingim as “tossing them in the general direction of the plate.”3 Ross Youngs led off, and “promptly thumped a triple”4 over Boston left fielder Fred Nicholson’s head. He trotted home on Irish Meusel’s sacrifice fly to right.

The real action started in the fourth inning. Heinie Groh drew a walk. Youngs sent a low line drive into left field, and Nicholson “attempted to make a catch on the fly but never laid a hand on the ball.”5 As the balled rolled to the fence, Youngs “chased Groh over the plate”6 for an inside-the-park home run. Meusel tripled and George “High Pockets” Kelly drove a ball into windy right field, which Walton Cruise missed, and Kelly had the second inside-the-park home run of the inning.

An inning later, Dave Bancroft lined the ball into left, creating more embarrassment for Nicholson, who again misplayed the ball, and Bancroft landed on third with a triple. Johnny Rawlings singled to center, driving in Bancroft. Groh’s grounder to third forced Rawlings at second base and Youngs doubled to right field. Meusel lashed a single up the middle, good for two runs batted in. Meusel attempted to take second on the play and was thrown out, but the Giants had added three more runs to their total, now leading 8-0.

Meanwhile, Douglas gave no indication that his arm had been sore. He had allowed a two-out single to Hod Ford in the second inning and a leadoff single to Walter Holke in the fifth. Larry Kopf had walked in the first and stolen second base, and that was as far as any Boston runner got against Douglas.

Three more runs were added to the Giants’ score in the top of the sixth. Ralph Shinners reached on an error by shortstop Kopf. Frank Snyder and Douglas each singled, with Douglas getting an RBI. This forced Boston manager Dick Rudolph to make a pitching change. He brought in Rube Marquard from the bullpen. With Bancroft batting, an attempted double steal failed. Douglas made it safely to second, but Snyder was called out at the plate by umpire Bill Klem. Bancroft lifted a fly ball to deep center, over Ray Powell’s head, for yet another inside-the-park home run, with Douglas scoring ahead of him.

At the end of the inning, New York led Boston 11-0. According to the Daily News, “The Braves’ half of the sixth inning passed into history in just two minutes,” as Marquard flied out and Powell and Kopf each grounded out.7 Then the Giants picked up where they left off. Youngs doubled to start the seventh, and he scored on Meusel’s single to center. That made it 12-0.

Douglas singled to lead off the Giants’ half of the eighth, and McGraw inserted Joe Berry as a pinch-runner. Marquard then retired Bancroft, and Rawlings grounded into a double play to end the inning.

The Braves ended the shutout in the bottom of the eighth inning, with Claude Jonnard now on the mound. They put up four runs on four hits as they “knocked Mr. Jonnard for a row of Cambridge shanties.”8 With one out, Ford was hit by a pitch. Hank Gowdy singled to left. After Marquard was retired for the second out, Powell walked, loading the bases. Kopf banged a triple to right, clearing the sacks. Cruise singled up the middle, driving in Kopf. Nicholson also singled, but Tony Boeckel’s line drive to left was caught by Meusel, ending the inning.

Youngs singled with one away in the ninth, as New York continued its hot hitting. Bill Cunningham, who had entered the game as a defensive replacement for Meusel in the seventh, stroked a double, and Kelly crushed another ball to right, which Cruise could not field, and Kelly’s second inside-the-park home run (and the Giants’ fourth of the game) meant three more runs for the visitors. Jonnard retired the Braves in order to finish the game.

Boston’s shortstop Kopf was charged with the only official error of the game; however, according to the Boston Globe, the Braves were hampered by “the wretched fielding of Cruise in right and Nicholson in left. Both of Kelly’s home runs were misjudged by Cruise, who allowed the wind to carry the ball over his head, and the one by Young[s] was on an attempted shoestring catch by Nicholson, who failed even to block the ball, which rolled out into the corner of left field.”9 The outfielders failed to “play the wind accurately.”10

Douglas picked up his third win of the season. The Brooklyn Times reported that “for seven innings the spitter kept the Braves away from the plate,” allowing only two hits.11 He had walked two and struck out two. Fillingim drew the loss, and his record fell to 1-3. He spent the rest of the season splitting time between starting and relieving.

Groh entered this game batting .431, but he was the only New York starting player to go hitless. The other eight starters combined for 19 hits (and Cunningham’s double made it 20), including three doubles, three triples, and four home runs. The New York Times told its readers, “At the start of the current season it was reported that the lively ball had been relegated to the discard. If the balls that were used in today’s melee are of the less lively kind the Giants’ batters must be using percussion caps in their bats.”12 The Giants tied their hit high for the season. On April 15 they had banged out 20 hits and 17 runs against the Brooklyn Robins at the Polo Grounds. The 1922 Giants ran away with the National League pennant, outscoring their opponents 852-658, and won their second consecutive World Series crown. Unfortunately for Douglas, he appeared in his final major-league game on July 30, 1922, yielding five earned runs in seven innings in a loss to the Pittsburgh Pirates. He was not on the Giants’ World Series roster.

Youngs was a perfect 5-for-5 at the plate. He scored five runs and drove in a pair. His batting average jumped 58 points (to .284 — it was only the Giants’ 15th game of the season). With the home run, triple, two doubles, and single, he had hit for the cycle and his slugging percentage exploded from .339 to .493. The future Hall of Famer finished the 1922 season with a .331 batting average and a .465 slugging percentage.