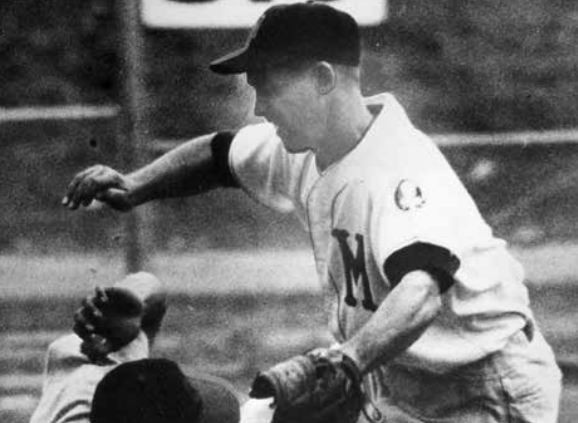 “This could be Art’s best year. I expect it to be. He does too.” — Minneapolis Millers’ manager Gene Mauch1 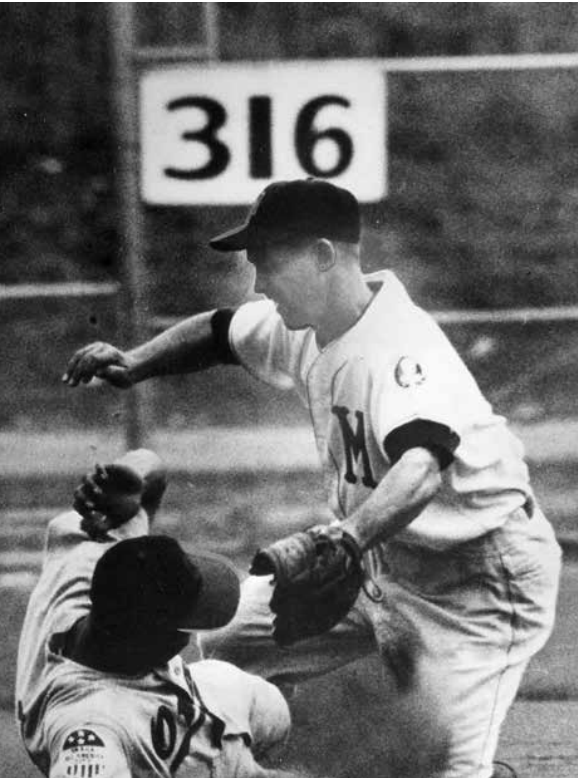 The Houston Buffs were visiting the Minneapolis Millers on April 29, 1959, and a slugfest materialized with Minneapolis prevailing, 9-5, behind the hitting of Art Schult and Lou Clinton and the pitching of Nels Chittum.

The Houston Buffs had joined the American Association at the beginning of the 1959 season, when the league expanded from eight to 10 teams and introduced divisional play. Prior to 1959 Houston had a team in the Texas League. The Buffs were not affiliated with a major-league team. Minneapolis was in the second year of its Triple-A affiliation with the Boston Red Sox, after being affiliated with the New York Giants from 1946 through 1957.

“I think I had a little wind with me, but I don’t care how far over the fence they go just so I get four bases and the Millers get the runs.” — Art Schult2

The starting pitchers were Chittum for Minneapolis and Billy Joe Bowman for Houston.

Minneapolis scored four first-inning runs off Bowman. With one out, Shep Frazier walked and Chuck Tanner singled. That brought Schult to the plate. A Bowman fastball exploded off Schult’s bat for a three-run homer. It was estimated that it landed 460 feet from home plate and rolled another 54 feet. His clout was followed by a somewhat more mundane homer by Lou Clinton that cleared the 405-foot sign in center field.

The sluggers of the Houston Buffs were quick to respond. In the top of the second inning, Ray Noble’s solo homer, his seventh of the season, led off the inning. The 40-year-old catcher, whose career had begun with the New York Cubans in 1945, had played three seasons with the New York Giants. After Ev Joyner walked and Phil Jantze singled, Roy Smalley’s three-run blast, his fourth, off a hanging curveball, tied the game at 4-4. For the balance of the game, Chittum abandoned the curve and stuck to his repertoire of sinkers and sliders.

In the third inning, Minneapolis threatened to break the deadlock, loading the bases with one out. At that point Houston manager Rube Walker changed pitchers, bringing on Lloyd Merritt to replace Bowman. Merritt struck out Ed Sadowski and Jim Mahoney and the game remained tied.

In the fourth inning, Merritt was lit up for three runs. Pumpsie Green singled and moved to second when Frazier grounded out. Tanner was then walked, bringing up Schult, who this time kept the ball in the ballpark, lashing a single over third baseman Phil Jantze’s head into left field. The single gave the Millers a 5-4 lead. Tanner and Schult came home on a two-run triple by Clinton, and the score was 7-4. Minneapolis extended its lead with single runs in the seventh and eighth innings off Mel Wright, who had entered the game in the seventh inning after Merritt had left the game for a pinch-hitter. Schult tripled in the seventh inning and came home on a single by Ed Sadowski. The eighth-inning run was driven in by Schult, who completed his cycle with a resounding double off the 405-foot sign in center field, scoring Green, who had singled for his second hit of the game.

The announced “crowd” of 226 saw Houston score once in the ninth inning when Dick Cole drove in Smalley, but it was a case of too little, too late.

With the seven-hit complete-game win, Chittum improved his record for the young season to 2-0. Before the season he had been acquired from the St. Louis Cardinals organization in a trade for Dean Stone. Chittum was called up to the Red Sox at the beginning of August and went 3-0 in 21 relief appearances. He started the 1960 season with Boston and was sent back to the minors in early May after six appearances without a decision. Merritt was charged with the loss, his third with no wins. His only big-league experience was with St. Louis in 1957. He had appeared in 44 games with the Cardinals, going 1-2 with a 3.31 earned-run average.

The Millers, with the win, were 10-6, a half-game out of first place in the American Association’s Eastern Division. The unaffiliated Buffs were in second place with an 8-8 record in the Western Division. At year’s end, the Millers had a 95-67 record, placing second in the Eastern Division standings to the Louisville Colonels. In the playoffs, Minneapolis defeated Omaha in six games and went onto defeat Fort Worth in seven games for the league title. In the Junior World Series, the Millers lost to International League champion Havana in seven games.

The Houston Buffs did not fare as well, finishing in the Western Division basement with a league-worst 58-104 record. The following season, Houston became the Triple-A affiliate of the Chicago Cubs and finished with an 83-71 record, good for third place.

Prior to the game, the Millers gave a lifetime American Association pass to their team physician, Dr. Paul Pierson. The longevity of the pass in Minnesota was only through 1960, as with the expansion of the American League in 1961, the Twin Cities welcomed the Washington Senators moving to Metropolitan Stadium to become the Minnesota Twins.

The days of the American Association were numbered. The league shrank to six teams in 1961 when the Twins joined the American League, and in 1963, three remaining teams in the league were absorbed by the Pacific Coast League, one went into the International League, and the remaining two (Omaha and Louisville) went without Triple-A baseball.

Rube Walker, the Houston manager, was fired on June 21, with the team mired in the basement (29-41). His successor, Del Wilber, did not do any better (29-63). Walker resurfaced as a pitching coach at the major-league level and is most famous as the pitching coach of the 1969 New York Mets.

Gene Mauch went on to manage at the big-league level beginning in 1960 with the Philadelphia Phillies, taking over the team in midseason. After being fired by Philadelphia in 1968, he became the first manager of the expansion Montreal Expos in 1969. He moved on to the Twins in 1976, becoming only the second man to manage both the Minneapolis Millers and the Minnesota Twins. (Bill Rigney was the other.) Beginning in 1981, Mauch managed the California Angels, with whom he had his greatest success, winning the American League West in 1982 and 1986.

Schult, the hero of the game, brought his early-season average to .317 (.435 against Houston) with his four-hit performance. He simply owned Houston pitching early in the season. His homer on April 29 was his fourth of the season, all against Houston, and 11 of his 15 RBIs, including five on April 29, were against the Buffs. For the season, he batted .289 with 16 homers and 71 RBIs. Schult’s homer was his 15th at Metropolitan Stadium. In all, during two seasons with the Millers, he had 19 homers at Metropolitan Stadium, breaking the record of 16 previously set by Willie Kirkland and tied by Bill Taylor. He had first played in Organized Baseball in 1948 at the age of 20 and, prior to 1959, he had played parts of three seasons in the big leagues with three different teams, getting into 110 games. On July 13, 1959, his contract was purchased by the Chicago Cubs and he made the quick trip from Minneapolis to Chicago. He was in 54 games with the Cubs in 1959 and 1960, retiring after the 1960 season.

On June 17, the Millers signed Roy Smalley, who had factored in four of Houston’s runs on April 29. Smalley had last played in the majors in 1958. Smalley, who would play most of his games with Minneapolis at second base, was the brother-in-law of manager Mauch. Smalley had been released by Houston earlier in June in an economy move. With the Millers, Smalley hit 10 homers at Metropolitan Stadium between July 15 and the end of the season.

Lou Clinton, who shared the spotlight with a homer, triple, and three RBIs, made it to the Red Sox in 1960 after batting .251 with 20 homers and 77 RBIs in 1959. He played eight major-league seasons with five American League teams, batting .247 with 65 home runs in 691 games. Of those homers, 12 came at Metropolitan Stadium, the first being on August 17, 1962, off Jack Kralick in the first game of a doubleheader. Over three seasons with the Millers, Clinton had 16 homers at Metropolitan Stadium.

On July 21 and July 27, respectively, the Minneapolis keystone combination from the April 29 game, second baseman Pumpsie Green and shortstop Jim Mahoney, were called up to the Red Sox. When Green played his first big-league game on the evening of July 21, 1959, he became the first person of color to play for the Boston Red Sox.

In addition to Baseball-Reference.com and the sources mentioned in the Notes, the author used the following source: