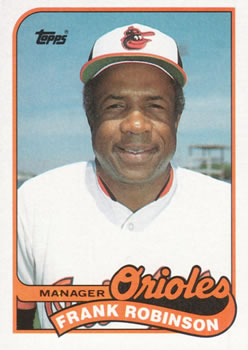 Much as the 1989 season would prove to be a refreshing change from the dreariness of the 54-107 season that preceded it, the afternoon skies in Baltimore on April 3, 1989, surprised forecasters and fans with pleasant sunshine and warm temperatures.

The 1989 Opening Day game between the Orioles and Red Sox at Memorial Stadium arrived with a wide variety of storylines, including these:

Yet in spite of all those storylines, when the day had concluded it was a simple fly ball in extra innings — along with Cal Ripken’s three-run home run in the seventh — that the 52,161 in attendance were talking about.

After a first pitch from President Bush, fans greeted Boggs with taunts related to his embarrassing scandal as the Boston leadoff hitter stepped in to face Orioles starting pitcher Dave Schmidt to begin the game. Schmidt retired Boggs on a groundball back to the mound and set down the side on just seven pitches.

When Roger Clemens took the mound for the bottom of the first inning on this day, he brought with him a 78-34 record through five seasons — and a pair of Cy Young Awards (1986 and 1987).

This matchup — of a 26-year-old pitcher at the very top of his game and a hapless Baltimore lineup that had traded away future Hall of Famer Eddie Murray the previous offseason — was a big part of what led the Globe’s Shaughnessy to offer up his prediction of a no-hitter prior to this game.

“Can Roger Clemens pitch an Opening Day no-hitter as Bob Feller did 49 years ago in Chicago?” Shaughnessy wrote. “It seems that all the planets are in line. The Orioles stink. Clemens is 6-2 lifetime against Baltimore with a 2.69 ERA. The weather should favor a fastball pitcher.”1

If Clemens was bothered by the hype surrounding the prediction of a no-hitter, he didn’t show it, as he retired the Orioles in order in the bottom of the first.

In a scoreless game in the top of the third inning, Boston first baseman Nick Esasky drove a pitch from Schmidt to the wall in right-center field. Rookie right fielder Steve Finley raced for it, extended his arm and made the grab just before slamming into the wall at full speed.

The sensational catch brought the crowd to its feet, but it also would eventually knock Finley from the game. Finley was replaced by Joe Orsulak in the top of the fourth, and it was later revealed that Finley suffered a sprained right shoulder that would keep him out of the lineup for nearly three weeks.

Finley’s catch helped Schmidt avoid allowing his first hit. In fact, through the first 2½ innings, neither Schmidt nor Clemens allowed a base runner in a fast-paced start to the game.

But in the bottom of the third inning Craig Worthington lined a single to left field, giving the game its first baserunner and ending all discussion about a Clemens no-hitter, though Worthington was caught stealing on the very next pitch and the game remained scoreless.

In the bottom of the fourth, Brady Anderson led off with a walk and, after Phil Bradley struck out, stole second base with Orsulak at the plate. Orsulak then lined a single into center field that scored Anderson with the game’s first run.

The score remained 1-0 Baltimore when the Red Sox finally got to Dave Schmidt in the sixth. Boggs led off the inning with a double and was doubled home by Dwight Evans. Mike Greenwell followed Evans’s double with a two-run home run to right-center, giving the Red Sox a 3-1 lead.

Anderson led off the Orioles’ sixth with a double to right and Bradley followed with a walk. After a groundout by Orsulak advanced the runners, no one would have questioned Clemens if he had pitched around the Orioles’ best hitter, Ripken, who was due up next.

But Clemens instead chose to pitch to Ripken, and on the seventh pitch of the at-bat, Ripken lined a chest-high Clemens fastball over the left-field wall for a three-run home run, giving the Orioles a 4-3 lead and sending Memorial Stadium into a frenzy.

After the game, Red Sox manager Joe Morgan explained, “Ripken’s the potential leading run. You don’t want to just put him on base.” Clemens added, “I wanted to pitch him high. I just made a pitch that ran back across the plate. If I had to do it all over again, I’d do the same thing. Come right at him.”2

The 4-3 lead proved to be short-lived, as the Red Sox quickly tied the game in the top of the seventh when Jody Reed singled home Esasky, who had doubled to lead off the inning. Left-hander Kevin Hickey– making his first big-league appearance in six years — replaced Schmidt and retired Boggs before yielding to Brian Holton.

Holton got Barrett to end the inning with a groundout and preserve the tie. The game remained tied at 4-4 into the bottom of the 11th inning, when Boston reliever Bob Stanley walked Mickey Tettleton with one out to put the potential winning run on base. Randy Milligan then lined a single into right field that sent Tettleton to third base and knocked Stanley from the game.

Right-hander Mike Smithson entered for the Red Sox and Boston manager Morgan opted for a five-man infield, moving left fielder Greenwell just to the left of second base in an attempt to prevent a groundball from getting through and scoring the winning run.

After the game the focus in the Boston clubhouse was on the failed strategy, with Smithson saying that had the five-man infield not been employed, “we’d still be playing.”3 And manager Morgan conceded, “I’d have to say that backfired. Normally, the center fielder gets to that ball. Tettleton never would have scored. This is only the second time it’s ever backfired on me. I would not have done it if I had had a second thought.”4

From the Orioles’ perspective, the home run by Ripken and Worthington’s game-winning hit received plenty of postgame attention, but manager Frank Robinson insisted that another player was actually the key to the victory.

“Out of all the things that contributed to this win, if I had to pick out one thing, it would be Holton’s pitching. He held us in the game. Gave us the chance to win.”5 Holton, indeed, was the game’s winning pitcher, allowing just three hits — and no runs — over 4⅓innings.

The dramatic victory proved to be the beginning of an unlikely turnaround season in 1989 that saw the Orioles occupy first place in the AL East from May 23 through August 31before they were overtaken by the Toronto Blue Jays. The team’s 87-75 record left them in second place and represented an improvement of 33 wins over the previous season.

The Red Sox would not repeat as AL East champions in 1989, finishing in third place with a final record of 83-79.

Three decades later, the 1989 “Why Not?” season endures as one of the favorites of Orioles fans. And the Opening Day game stands out as one of the year’s highlights.

In addition to the sources cited in the Notes, the author relied on Baseball-Reference.com for research assistance.