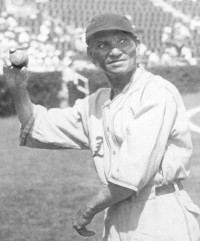 Relocated, renamed, and piloted by two generations of Black baseball royalty, the Columbus Buckeyes opened the 1921 Negro National League season to fanfare, hosting the Chicago Giants on April 30. But Chicago’s John Taylor struck out 12 Buckeye batters and the Giants capitalized on shaky Columbus defense for a 5-3 win at Neil Park.

The Dayton Marcos were charter members of the Negro National League in 1920.1 After the Marcos won only 16 of 52 games that season, two investors from Kansas City — Dr. Howard Smith and Harry St. Clair — purchased the team.2 Dr. Smith oversaw Jackson County, Missouri’s Negro Home for the Aged and Infirm;3 the Chicago Whip described him as “a dyed-in-the-wool baseball fan, a bright student of the game … and [he] has so many friends among the ballplayers that he can’t name his favorite team.”4 St. Clair’s name frequently appeared in the newspapers alongside allegations of various illegal activities; he disappeared from print coverage shortly after the purchase announcement.5 They relocated the Marcos approximately 70 miles east to Columbus, Ohio’s state capital.

Two legendary figures of Black baseball — both with long-standing ties to Negro National League founder and president Rube Foster — were hired to run the rechristened Columbus Buckeyes. King Solomon “Sol” White’s remarkable life in baseball dated to 1883, when he joined a white amateur team from his hometown of Bellaire, Ohio.6 An outstanding player over four decades, manager of the formidable Philadelphia Giants, and author of Sol White’s Official Base Ball Guide, an essential document of Black baseball history, White served as the Buckeyes’ business manager. Foster had anchored White’s Philadelphia pitching staff from 1904 to 1906; with White now helming a league rival of Foster’s Chicago American Giants, the Chicago Whip asserted, “it will afford fans … an opportunity to decide who is the master, the teacher or the pupil.”7

White and Foster’s influence brought John Henry “Pop” Lloyd to Columbus as the Buckeyes’ player-manager.8 The 37-year-old Lloyd had spent much of his professional career at shortstop for teams managed by White or Foster. His esteem in the game was second to none. Babe Ruth reportedly called him “the greatest player ever.”9 Connie Mack regarded him as Honus Wagner’s equal.10 Wagner himself felt honored by the “Black Wagner” comparison.11 Lloyd arrived in Columbus fresh off managing the Brooklyn Royal Giants to the Eastern League championship series in 1920. “Columbus is a new town to me, but baseball and the men who will help me to give the city a pennant winner are not,” Lloyd said.12

The Buckeyes secured Neil Park, home of the American Association’s Columbus Senators, as their home field. When Neil Park opened in 1905, it hosted two American League games between the Detroit Tigers and Boston Americans. “The Columbus fans are anxious to see their city in one of the major leagues,” the Boston Globe reported at that time. “The new ball park here is built on the same plans as the American grounds at New York and [is] up to the best parks of the major leagues.”13

Neither the American League nor the National League ever graced Neil Park after that 1905 series, but the Negro National League slated Columbus to open its inaugural season there with a series against the Chicago Giants, who competed as a “traveling club,” without a true home field.14

The Giants had won only five times in 36 league games in 1920, but the Chicago Whip struck an optimistic tone for the new season. The Giants “are able to trot out a bunch of artillerymen that can stand up and fight to the last ditch under any kind of fire,” the Whip proclaimed of manager Joe Green’s pitching staff. “[T]he Chicago infield and outgarden are framed strong on the defense and will wage a fierce and menacing offense.”15

Opening Day arrived chilly in Columbus. Both teams rode through downtown in an automobile parade. Approximately 3,000 fans showed up at Neil Park on a Saturday afternoon, including noted war correspondent Ralph W. Tyler, a Columbus native.16 Rube Foster himself was there. Columbus’s Second Regiment Marching Band and a collection of jazz musicians played pregame music, “jazz[ing] things up in great style.”17

The Giants scored first against Buckeyes starter George “Chippy” Britt. John Beckwith led off the second for Chicago. The 21-year-old shortstop was in the early stages of a two-decade career as one of Black baseball’s leading power hitters;21 in 1920 the Chicago Whip called him “the lad whom the fans around the circuit consider as the heaviest clotter in captivity.”22 A century later, sportswriter Joe Posnanski ranked the 6-foot-3 Beckwith, known as the Black Bomber, among the 50 greatest eligible players not in Baseball’s Hall of Fame.23

Beckwith doubled and moved to third on a balk. Britt retired Bingo Bingham and Harry Bauchman, but Harry Jeffries beat out an infield single; Beckwith scored for a 1-0 Giants’ lead.

For the Giants, Taylor kept Columbus off the scoreboard in the first two innings. Quincy J. Gilmore of the Kansas City Sun had selected Taylor for his 1920 Negro National League all-star team;24 the Chicago Whip labeled him “the most feared heaver on the circuit.”25 In the third, George Brown singled off Taylor and stole second, bringing up Britt. “[A]s an all-around player he has no superior,” the Chicago Whip wrote of Britt.26 Here, he singled to center; Brown came home to knot the game, 1-1.

Chicago surged ahead in the fifth. Bauchman led off with a double. Attempting to sacrifice him to third, the speedy Jeffries bunted toward Coleman.27 The Buckeyes first baseman threw to Boots McClain, who had moved over from second base to cover first. But McClain dropped the throw and both runners were safe.

Duncan followed with a single to right, driving in Bauchman with the go-ahead run. Britt struck out Taylor, but Eggleston attempted to “catch Duncan napping” off first and threw wildly.28 Jeffries scored on the error, and the Giants now led, 3-1.

Another unearned run increased Chicago’s advantage in the seventh. After Bingham’s leadoff single, Bauchman sacrificed him to second. Jeffries also bunted and was safe on Britt’s error; Bingham took third. Duncan grounded to third; DeWitt had a play on Bingham coming home but threw to first — in what the Columbus Dispatch called “a bad bit of thinking” — as Bingham scored for a 4-1 lead.29

The Giants again capitalized on shaky Columbus defense for a ninth-inning run. With two outs, Bauchman drew Britt’s only walk of the game and raced to second when ball four got away from Eggleston for a passed ball. Jeffries singled him home.

Taylor cruised into the ninth with a 5-1 lead. Backed by Beckwith’s “dazzling fielding around the shortstop position,” he had limited the Buckeyes to seven hits and one walk.30 Thomas and Lloyd went down to begin the ninth. The final out appeared at hand when Coleman grounded to second. But Bauchman bobbled the ball for an error and the Buckeyes were still alive.

Eggleston was due to bat, but Lloyd sent up 18-year-old William Monroe “Buck” Ewing to pinch-hit. Pregame coverage in the Chicago Whip highlighted Ewing, predicting that the Massillion, Ohio, native would be “a revelation to the baseball devotees all over the circuit.”31

On this occasion the hype was justified. Ewing connected for a long opposite-field home run over the right-field wall. The crowd at Neil Park “went dippy for a few minutes,” the Chicago Defender observed.32 “Ewing emulated another Ewing,” the Columbus Dispatch noted, evoking the name of nineteenth-century star — and Ohio native — Buck Ewing.33 Only two other right-handed hitters had ever homered over Neil Park’s right-field wall.34 Chicago’s advantage was down to 5-3.

Taylor regrouped to fan Brown for the final out — and his 12th strikeout of the game. The Giants had opened the season with a 5-3 win.

“[W]hat little bad baseball did creep into the contest was far overshadowed by the better brand of pastiming, and as a result the fans left the park boosting the colored performers,” the Columbus Dispatch concluded.

After finishing in sixth place with a 42-48-1 record, the Buckeyes disbanded, leaving 1921 as their only season of Negro National League competition.36 White left the team in August; he returned to the Negro National League in 1924 as manager of the Cleveland Browns.37 Lloyd moved on to the Bacharach Giants in 1922.38

Thanks to SABR members Chris Hicks and Thomas Thress for their research assistance with issues of the Chicago Defender and Kevin Larkin, Bob Webster, and Jack Zerby for their comments on an earlier version of this article. Special thanks to the Columbus Metropolitan Library’s Local History & Genealogy Section for providing articles from the Columbus Dispatch’s 1921 coverage of the Columbus Buckeyes.

24 Q.J. Gilmore, “A Merry Christmas and a Happy New Year to the Sport Fans of Kansas City.”

27 A 1921 article noted that Jeffries “is said to be one of the fasted colored men in the game.” “Illinois Giants and La Crosse Battle Nine Innings to a Tie: Darkness Forces Calling of Game After Nine Frames,” La Crosse (Wisconsin) Tribune and Leader-Press, August 18, 1921: 7.

32 “Homer in the Ninth Wins for Green’s Chicago Giants.”