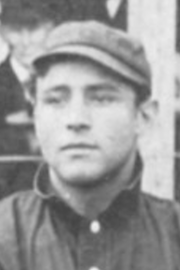 When the Negro National League opened play in 1920, its membership included the Chicago Giants, piloted by Black baseball veteran Joe Green and federated in Rube Foster’s organization after many years as an independent club. The Giants won only five league games in their debut season but were two outs from starting 1921 with back-to-back wins, before settling for a 4-4 tie with the Columbus Buckeyes in 11 innings on May 1.

Chicago native Charles Albert “Joe” Green began his five-decade career in baseball in 1900. After stints with various Black teams in Chicago — including the Columbia Giants and the Union Giants — Green stepped in for the Leland Giants, managed by future Negro National League founder and President Foster, when regular left fielder Bobby Winston broke his ankle in 1909.1

His play that season drew praise: “How well he served the territory of the left garden is a sublime thought to all who attended the Lelands’ famous fought games; and Greenie hit the ball to the four corners of the earth.”2 Green himself suffered a broken leg while sliding into third on a pickoff attempt during a barnstorming game against the Chicago Cubs that October — and made headlines for getting up and attempting to score when the throw sailed into left field, hopping into Cubs catcher Pat Moran’s tag on his remaining healthy leg.3

A season later, Foster gained control of the Leland Giants from team President Frank Leland.4 Leland wound up running a team called the Chicago Giants, whose lineup included Green. By 1912 Green, then 34 years old, was player-manager of the Chicago Giants; after Leland’s death in 1914, Green took over the team, which competed mostly around the Midwest for several years, independent of a league structure.

Green, who coached third when not between the lines himself, earned a reputation as an entertainer. An Indiana newspaper in 1916, previewing a Giants appearance in Hammond, compared Green’s “colored dance on third base” favorably to the gyrations of White baseball coaching comedians Nick Altrock and Germany Schaefer.5 “[H]e keeps the fans in an uproar with his witty remarks,” the Chicago Whip noted in 1920.6 “Shadow boxing, roaring up and down the baselines, scampering through the stands to unload his foolishness are all part of Green’s comical antics,” another Indiana newspaper reported in 1936. “Joe is billed at every showing of his powerful baseball unit as ‘Baseball’s One-Man Circus.’ … His capers are without end, and he keeps fans and players alike in a constant roar as he cuts loose with his mirth-provoking antics.”7

Foster formed the Negro National League in February 1920 and included Green’s Giants among its eight charter members.8 Unlike Foster’s own Chicago American Giants, who played their home schedule at Schorling’s Park, Green’s club competed as a “traveling team,” without a home field of their own.9 They struggled in league play in 1920, winning only five times in 36 Negro National League games.

Notwithstanding the Giants’ record — and his own puckish image — Green had a well-respected eye for talent. In December 1920 Quincy J. Gilmore of the Kansas City Sun, a prominent Black weekly newspaper, spoofed letters to Santa Claus from Negro National League executives. Green’s purported letter referenced three members of the Giants:

“All I want, Santa, is those players that nobody else wants, and I will be satisfied. Nobody wanted Taylor, the great pitcher; Beckwith … and little Frankie Duncan, last year; now every one of the other magnates want[s] to take them from me. Yes, Santa, just give me the leavings.”10

The three players mentioned in Green’s “letter to Santa” — John Taylor, John Beckwith, and Frank Duncan — led Chicago to a 5-3 win over Columbus in the Giants’ 1921 season opener on April 30. Taylor struck out 12 and limited the Buckeyes to one run before giving up a two-run pinch-hit homer to William Monroe “Buck” Ewing after an error with two outs in the ninth. The 21-year-old Beckwith contributed a double and “dazzling fielding” at shortstop.11 Duncan — whom the Chicago Whip labeled the “find of the season” as a 19-year-old rookie in 192012 — caught Taylor’s gem and singled home the run that put Chicago ahead to stay.

The Giants aimed for their second win in row a day later at Columbus’s Neil Park, with left-hander Luther Farrell to the mound. Farrell — nicknamed Red, identified solely as Luther in newspaper coverage, and sometimes known as Alaner Luther — had prepared for the season by pitching for the Giants in an exhibition game against a White semipro team on April 10 in Chicago, in which he allowed five runs in seven innings.13

Columbus’s Roy Roberts opposed Farrell. Roberts had a long relationship with Buckeyes player-manager John Henry “Pop” Lloyd. He was on the Bacharach Giants staff in 1919 when Lloyd became manager. In 1920 he moved to the Brooklyn Royal Giants, also managed by Lloyd. After their season together in Columbus in 1921, he joined Lloyd on the New York and Atlantic City incarnations of the Bacharach Giants in subsequent years.

Behind Roberts, Lloyd made two changes from the Buckeyes’ Opening Day lineup. Willie Woods, recently acquired from the Indianapolis ABC’s, started in right field; the Chicago Defender asserted that Woods “looks to be about as speedy a man as ever swept on to Neil Park,” comparing him favorably in that respect to Skeeter Shelton, who had played for Columbus in the American Association for four years before a brief appearance with the New York Yankees in 1915.14 Clint Thomas, the Buckeyes’ right fielder in the opener, moved to second.

Another newcomer from the ABC’s, Robert Hudspeth, replaced Arthur Coleman at first. A left-handed batter, Hudspeth was distinguished by his height; the Chicago Defender observed that he “look[ed] to be about as tall as Grover Lowdermilk would be if he stood on a pair of stilts,” referencing a 6-foot-4 pitcher who had finished his major-league career with the Chicago White Sox a season earlier.15

Roberts got off to a wild start before a crowd of “about 4,000 fans,” walking three Giants batters in the top of the first and throwing a run-scoring wild pitch, as Chicago gained an early 1-0 advantage.16

Farrell retired Woods and Samuel DeWitt to start the home half of the first. But Isaac Lane followed with a single, bringing up Thomas.

The 24-year-old Thomas had debuted in professional baseball a season earlier with the Brooklyn Royal Giants. He later emerged as one of Black baseball’s top defensive outfielders of the 1920s and 1930s, receiving the nickname The Black DiMaggio.17 Here, he tripled Lane home. Thomas then scored on Duncan’s error for a 2-1 Columbus lead.

The Giants got the run back in the second. Roberts opened the inning by issuing another walk to speedy Harry Jeffries.18 Two batters later, Luther singled him home to tie the game.

Columbus struck back in the bottom of the second. Mack Eggleston doubled and Roberts drove him in with a single. But the Buckeyes’ lead again lasted only until the Giants’ next time at bat; Chicago bunched three singles off Roberts in the top of the third for a run, tying the game, 3-3.

Both starting pitchers settled in after the early scoring flurry and posted a series of zeroes on the scoreboard. Farrell finished the game with eight strikeouts; Roberts recorded six.

The tie held until Chicago batted in the top of the eighth. After the Giants loaded the bases, Duncan drew a walk — one of seven that Roberts issued in the game — to give Green’s team a 4-3 advantage.

The Giants carried the one-run lead into the bottom of the ninth; Farrell had recorded six scoreless innings in a row. Thomas led off the inning with a single. Hudspeth was due next, but Lloyd sent up Ewing, a day after the teenager’s long pinch-hit home run against Taylor.19

This time, Ewing drew a walk, putting runners on first and second for Lloyd. Farrell induced the future Hall of Famer to hit a groundball that Chicago turned into a force of Ewing for the first out. But George Brown’s grounder to Jeffries at first scored Thomas with the tying run, and the game went into extra innings.

The deadlock remained through the 11th inning. At that point, according to the Chicago Defender, “dusk was settling on the field.” The umpire “wisely called hostilities for the day”; the game went into the record books as a tie.20

The Chicago Whip struck an optimistic chord afterward: “The Chicago Giants right now loom about as strong as any team in the league, and starting off at the top of the heap has given them a lot of confidence. If they hold their form they will be the dark horses in the 1921 struggle for supremacy.”21

But the Giants did not maintain their early form, finishing with a 10-35-2 record in Negro National League play, the league’s worst mark by a large margin. They dropped to an “affiliated” status after the 1921 season.22 Joe Green continued to lead the Giants through the 1940s; he died in 1962 at the age of 84.23

In addition to the Sources cited in the Notes, the author consulted the Seamheads.com, Baseball-Reference.com, and Retrosheet.org websites for pertinent material; newspaper game coverage in the Chicago Defender, Chicago Whip, and Columbus Dispatch; and SABR Baseball Biography Project biographies of baseball figures involved in the game, especially Tim Odzer’s biography of Rube Foster and Thomas Kern’s biography of John Henry Lloyd.

Thanks to SABR members Chris Hicks and Thomas Thress for their research assistance with issues of the Chicago Defender and SABR members Kurt Blumenau, Kevin Larkin, and Robert Webster for their comments on an earlier version of this article. Special thanks to the Columbus Metropolitan Library’s Local History & Genealogy Section for providing articles from the Columbus Dispatch’s 1921 coverage of the Columbus Buckeyes.

3 “City Champs Win from Lelands, 4-1: Combination of Hits and Errors in Third Gives Cubs Victory,” Chicago Tribune, October 19, 1909. The article’s subheadlines included “Joe Green Hops Home” and “Giants’ Center Fielder Breaks One Leg and Tries to Score on Other One.”

11 “Columbus Colored Team Is Defeated in First Contest: Lid Snaps with Usual Ceremonies,” Columbus Dispatch, May 1, 1921: 32. “Luther Farrell has been sent to the Lincoln Giants by Ed Bolden of Hilldale,” the Pittsburgh Courier reported in 1925. “Farrell is the bimbo who pitched for Joe Green’s Chicago Giants some years ago under the name and title ‘Luther.’ He is a crooked arm hurler and swings a naughty bat.” W. Rollo Wilson, “Eastern Snapshots,” Pittsburgh Courier, May 23, 1925: 12.

15 “Darkness Halts 11-Inning Fray at Columbus, O.” “The huge first baseman is considered the largest man in semi-pro baseball,” a New Jersey newspaper observed of Hudspeth in 1925. “Hudspeth is a star if there ever was one. He can field his position exceptionally well in spite of his length — he measures some good six feet eight inches above the ground.” “Carl Deetgen Will Twirl in Twilight Game for Madonnas,” Bergen (New Jersey) Evening Record, July 29, 1925: 17.

18 A 1921 article noted that Jeffries “is said to be one of the fasted colored men in the game.” “Illinois Giants and La Crosse Battle Nine Innings to a Tie: Darkness Forces Calling of Game After Nine Frames,” La Crosse (Wisconsin) Tribune and Leader-Press, August 18, 1921: 7.