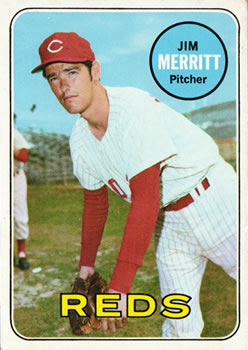 On April 6, 1970, the Cincinnati Reds were a club transitioning from one era to another. By midseason the Reds would leave their longtime home at Crosley Field for the brand-new Riverfront Stadium. Without necessarily knowing it, the Reds stood on the brink of the most successful era in team history. Expectations were raised. Cincinnati Enquirer columnist Bob Hertzel declared, “The goal is a pennant and a World Series for the new Riverfront Stadium and nothing short of that will do.”1

In the final Opening Day at Crosley Field, Cincinnati’s Jim Merritt faced Montreal’s Joe Sparma for the 2:30 P.M. first pitch. Merritt’s spring training had been curtailed by a broken right elbow; fortunately for, Merritt, he pitched with his left arm. Attempting to retrieve his son’s kite the day before leaving for spring training, Merritt fell off the roof of his California home. He was the Reds’ winningest pitcher in 1969 (17-9), and notched two wins against the expansion Expos.  Massillon, Ohio, native and former Ohio State quarterback Joe Sparma was a new addition for the Expos, joining the NL’s Canadian entry after going 6-8 with the Tigers in 1969.

Although the ballpark was on its way out, Crosley Field’s final opener marked several debuts.  Thirty-six-year-old Sparky Anderson debuted in what would be the first of his 4,030 games as a major-league manager. The Reds tendered Anderson only a one-year contract, and Hertzel noted, “Sparky is here on a win-or-else basis.”2 Anderson was not the only addition to the Reds dugout. Six rookies made the big-league squad, and two would start on Opening Day. Bernie Carbo, the 1969 American Association most valuable player, earned the starting assignment in left field after Alex Johnson’s trade to the California Angels. Dave Concepcion would start at shortstop, and his manager’s optimism was obvious. Anderson gushed that Concepcion “could be the outstanding shortstop in baseball within a couple of years. . . . He can do things with a glove that are absolutely unbelievable.”3 Aside from his rookie additions, Anderson adjusted the lineup, making Bobby Tolan the leadoff hitter and dropping Pete Rose to the third spot. Anderson justified the switch: “I want a little more speed at the top of the order.”4

After pregame entertainment sponsored, as always, by the Findlay Market Association, the game got underway in drizzly, 48-degree weather. Merritt induced a grounder from Gary Sutherland  to Concepcion, then struck out Rusty Staub looking and Ron Fairly swinging. Sparma allowed only a two-out double to Rose, but otherwise escaped the season’s first inning unscathed. In fact, both pitchers put zeros on the scoreboard through the first three innings. The only blemish to Merritt’s pitching line was a leadoff walk to Bob Bailey in the second, but Johnny Bench threw out Bailey attempting to steal second base. Before the season, Bench noted, “I’d like to improve defensively behind the plate.”5 The Reds catcher was off a good start. Expos third baseman Coco Laboy’s one-out error permitted Lee May to reach base in the Reds’ second, but grounders by Carbo and Concepcion ended the inning. Merritt singled against his opposite number to lead off the home third, and Rose later walked, but Tony Perez stranded two baserunners with an inning-ending strikeout. The Montreal Gazette’s Ted Blackman deemed Sparma’s effort “satisfactory” through three innings.6

Again facing the top of the Expos order in the fourth, Merritt achieved another three-up, three-down inning to match the result from the first inning. Sparma, however, would not hold serve facing the Reds in the home half. Bench led off by doubling into center field. May, who enjoyed a successful spring by batting .397,7 worked the count full before blasting the payoff pitch over the scoreboard in left field. May’s shot certainly received notice. Anderson later opined, “May hit that one into the wind. No man should be that strong. But he is.”8 Third-base coach Alex Grammas added, “I’ve never seen a ball hit that hard.”9 The Reds led 2-0.

Carbo followed May to the plate. Although he grounded out in his first major-league at-bat, his second ended much differently. With 15 family members in attendance,10  Carbo sent Sparma’s third pitch of the at-bat into the bleachers. Carbo surprised himself with his home-run ball. “I felt I hit it pretty well,” the rookie said. “Then I couldn’t believe it was a home run. My first thought was, ‘Oh, My God.’”11  In the excitement of the moment, Carbo streaked around the bases, prompting commentary from fellow outfielder Rose, who offered that “Bernie was so excited when he hit that one out he forgot to give it the home-run trot. He must have circled the bases in 14 seconds.”12  The Reds mobbed Carbo when he returned to the dugout. With none out in the fourth, the Reds had opened a 3-0 lead.

Sparma regained enough composure to strike out Concepcion in the next at-bat, before Merritt grounded to first baseman Fairly for an unassisted out. After taking Sparma’s pitch for ball one, leadoff hitter Tolan hit a hard line drive into the right-field bleachers to make the score 4-0.  Tommy Helms grounded out to shortstop Bobby Wine to end the frame, but the damage was done.

If the Expos intended to rally in the top of the fifth, their effort ended meekly. Merritt retired the side in order with a strikeout, groundout and fly out to keep Montreal scoreless and hitless. Sparma’s afternoon did not improve in the home fifth as nature provided an assist to the Reds. Leading off, Rose sent a fly ball into center field. With the wind carrying the ball, Adolfo Phillips misjudged the play and tripped as the ball sailed out of his reach. The result was a triple for Rose. Sparma next walked Perez, then struck out Bench for the first out. Phillips correctly judged May’s ball for the second out, but the fly scored Rose for a 5-0 Reds lead. The RBI was May’s third of the game. Sparma walked Carbo to extend the inning before striking out Concepcion for the second time. That strikeout was Sparma’s final action of the day.

Before the game, Anderson said he expected six innings of work from Merritt.13  With the Reds starter also keeping the Expos hitless through six innings, Merritt clearly exceeded his manager’s expectations. In the Expos’ seventh, Sutherland popped up to May at first base, but Staub ended the no-hit bid by driving Merritt’s slider 390 feet against the right-center fence for a triple.14  Merritt insisted the no-hitter was not on his mind. “No, I wasn’t thinking about the no-hitter at all. I’ve never been this close before but I told myself a long time ago that if I ever did, I wouldn’t start worrying about it until there was only one more batter to get out.”15  Fairly’s checked-swing single into center field brought home Staub for the first Expos run. Montreal would get no closer than 5-1 as Bailey’s grounder to Concepcion and Laboy’s popup to May ended the visitors’ seventh.

Merritt continued his mastery of the Expos during the final innings. Phillips and John Boccabella hit consecutive popups to start the eighth inning. After walking Wine, Merritt struck out Ron Brand looking to end the inning. Sutherland led off the Expos’ ninth by singling into center field and advanced to second base when Staub’s groundball allowed May an unassisted out at first base. Fairly’s ball landed in Tolan’s glove before Carbo ended the game (and his successful debut) by hauling in Bailey’s fly ball. With the game over, the Reds surrounded Merritt in celebration.

After the game, Merritt’s performance was the topic of discussion. He gave this self-assessment: “I had fantastic control. That was the biggest thing I had going for me.”16  His catcher may have had the best perspective for judging his batterymate.  Bench said, “This is early in the year but his control was pure July.”17  Reds pitching coach Larry Shepard noted, “Jim stayed ahead of the hitters. That’s the secret of going the route.”18  With his one-year contract combined with high expectations, Anderson started his major-league managerial career on the hot seat. For one day, Merritt and his teammates allowed their manager an easy afternoon. Anderson said of the game, “I just sat on the bench and enjoyed a nice relaxed time.”19

In addition to the sources cited in the Notes, the author also consulted baseball-reference.com, retrosheet.org, and The Sporting News, April 11, 1970.