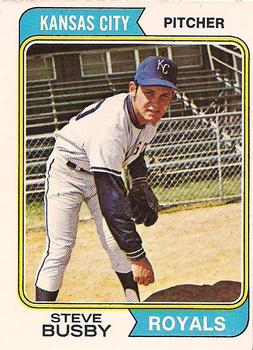 The day before (April 5), in the season opener for both teams, the Twins beat the Royals, 6-4. But this game would be different from the start.

The Royals wasted no time as they jumped all over Bill Hands in the first inning. Freddie Patek led off with a single to center and stole second. Jim Wohlford followed with an infield single that moved Patek to third. Hands struck out Vada Pinson for the first out. John Mayberry drove in Patek with a ground single to right. With runners on first and second, Hands struck out Amos Otis for the second out. Just one more out and the Twins would be out of the jam.

But it was not to be. The next five Royals reached base. Cookie Rojas smashed a double off the center-field fence, scoring Wohlford and Mayberry. Hal McRae’s single to left plated Rojas for the fourth run. Then, Paul Schaal was hit by a pitch. Fran Healy continued the barrage with a single to right. McRae beat the throw home and Healy and Schaal ended up on second and third, respectively. Batting for the second time in the inning, Patek singled again. This time his liner handcuffed Twins shortstop Sergio Ferrer and allowed Schaal and Healy to score. Minnesota’s manager, Frank Quilici, mercifully ended Hands’ suffering by replacing him with Ray Corbin. By the time Wohlford grounded to third to end the first inning, the Royals had scored seven times.

After Steve Busby retired the Twins in order in the top of the second, the Royals kept their collective foot on the gas in their half. Pinson led off by flying out to left. Then Corbin walked Mayberry and Otis. One out later, McRae made Corbin pay for his wildness with a 425-foot three-run homer onto the embankment behind the center-field fence. Fernando Gonzalez, who replaced Schaal, struck out to end the inning. The Royals were ahead 10-0 and it seemed they had an insurmountable lead.

But the Twins came right back in the third. After Randy Hundley fouled out, Jerry Terrell hit a double between third baseman Gonzalez and the bag. Terrell advanced to third on a passed ball by Healy. After Ferrer popped out and Rod Carew walked, Larry Hisle drove in Terrell with a single to left and the Twins were on the board.

The Twins continued to chip away in the fourth inning. Bobby Darwin singled to right and Harmon Killebrew singled to center. Steve Braun then cut the Royals’ lead to 10-4 with a home run to right field. Busby allowed a single to Hundley before setting down the next three Twins in order.

The long ball again helped the Twins draw nearer in the fifth. After Hisle singled, Darwin hit an opposite-field home run and the Twins closed the lead to 10-6. Those two runs were the last they would score.

In their half of the fifth, the Royals put the game away. Danny Fife had come on to replace Corbin for the start of the third inning and had allowed only one baserunner. But if Fife had any magic, it disappeared when Hal McRae led off the fifth with a double to right. He advanced to third when Gonzalez grounded out to second. Now it was Fife’s turn to lose control. He walked Healy, allowed Patek’s third single of the game, and walked Wohlford. With one run in and the bases loaded, Quilici brought in Vic Albury to create a lefty-lefty matchup with Vada Pinson. But the strategy backfired as Pinson’s single to right drove in Healy and Patek and moved Wohlford to third. Mayberry, another left-handed hitter, doubled to drive in Wohlford. The runners held at second and third when Otis grounded to shortstop Sergio Ferrer. Frank White pinch-hit for Cookie Rojas and hit another grounder to Ferrer. This time, Ferrer’s throw sailed over the head of first baseman Jim Holt, allowing Pinson and Mayberry to score. After another walk and a wild pitch put runners on second and third, Albury struck out Gonzalez for the third out. The Royals plated six runs to increase their lead to 16-6.

Busby was replaced by Al Fitzmorris to start the sixth inning. The trio of Fitzmorris, Bruce Dal Canton, and Joe Hoerner limited the Twins to just two singles and a walk over the last four innings.

Unlike the Twins, the Royals kept scoring. Albury started the sixth by walking Healy and Patek, at which point Albury was relieved by Tom Burgmeier. Albury walked three and gave up four runs (two unearned) in only two-thirds of an inning. After Wohlford flied out to left, the onslaught continued. Pinch-hitting for Pinson, Al Cowens doubled to right, scoring Healy and Patek. Cowens went to third on a wild pitch and scored when Mayberry grounded out to first base. That flurry made the score 19-6.

Frank White led off the seventh with a home run to left for the only scoring. That made White the first player from the Royals Baseball Academy to hit a home run in the majors.

In the eighth, with Dick Woodson pitching, the Royals got their final three runs. Woodson started the inning by walking Patek, who reached base for a fifth time. (Woodson was traded to the Yankees less than a month later and was out of the majors the next year.)

The Twins’ sloppy play continued when shortstop Danny Thompson (who had replaced Ferrer) dropped the throw from Terrell (who had switched from third to second to replace Carew) on what would have been a force at second. They got the first out as Cowens grounded into a short-to-second force play with Patek moving to third. Mayberry then went to left field for his second double of the game. That drove in Patek and Cowens. Otis avoided being the only starter not to reach base and capped off the scoring when he drove in Mayberry with a single to left. That made the final score Royals 23, Twins 6.

The 23 runs were a team record for the Royals and remained so for more than 30 years. It was the most runs scored in the majors since 1957. It still (as of 2019) is the most runs allowed by the Twins since they moved to Minnesota.

Patek, Mayberry, and McRae led the Royals attack with three hits apiece. Patek scored and drove in three runs, Mayberry scored four and drove in five, and McRae scored three and drove in four. The Royals scored their 23 runs with only 16 hits. They were helped by two Twins errors and a whopping nine walks by Twins pitchers. The Twins got 12 hits of their own and actually had more players with multiple-hit games than the Royals. Hisle, Killebrew, Darwin, and Braun each had two hits.

Bill Hands left the game with an ERA of 94.50! Before coming to the Twins, Hands had been primarily a starter for the Cubs for the previous seven years. His park-adjusted ERA was at least 10 percent better than average in each of those years. He went 54-39 from 1968 through 1970. By the end of the 1974 season, he whittled his ERA down to 4.18, by pitching to a 3.71 ERA the rest of the year. Even so, Hands would pitch only one more season in the major leagues.

But that was the end of Busby’s run as an effective pitcher. In 1976 he was diagnosed with a torn rotator cuff and is believed to be the first pitcher to undergo rotator-cuff surgery. As a result, he missed all of 1977. Busby pitched in only 40 more games over the next three seasons, winning eight and losing nine.

The Twins finished the season with a record of 82-80, while the Royals went 77-85. They would not finish ahead of the Royals again until 1987, 13 seasons later.

The author used baseball-reference.com, retrosheet.org, and baseball-almanac.com, and the following newspaper accounts: