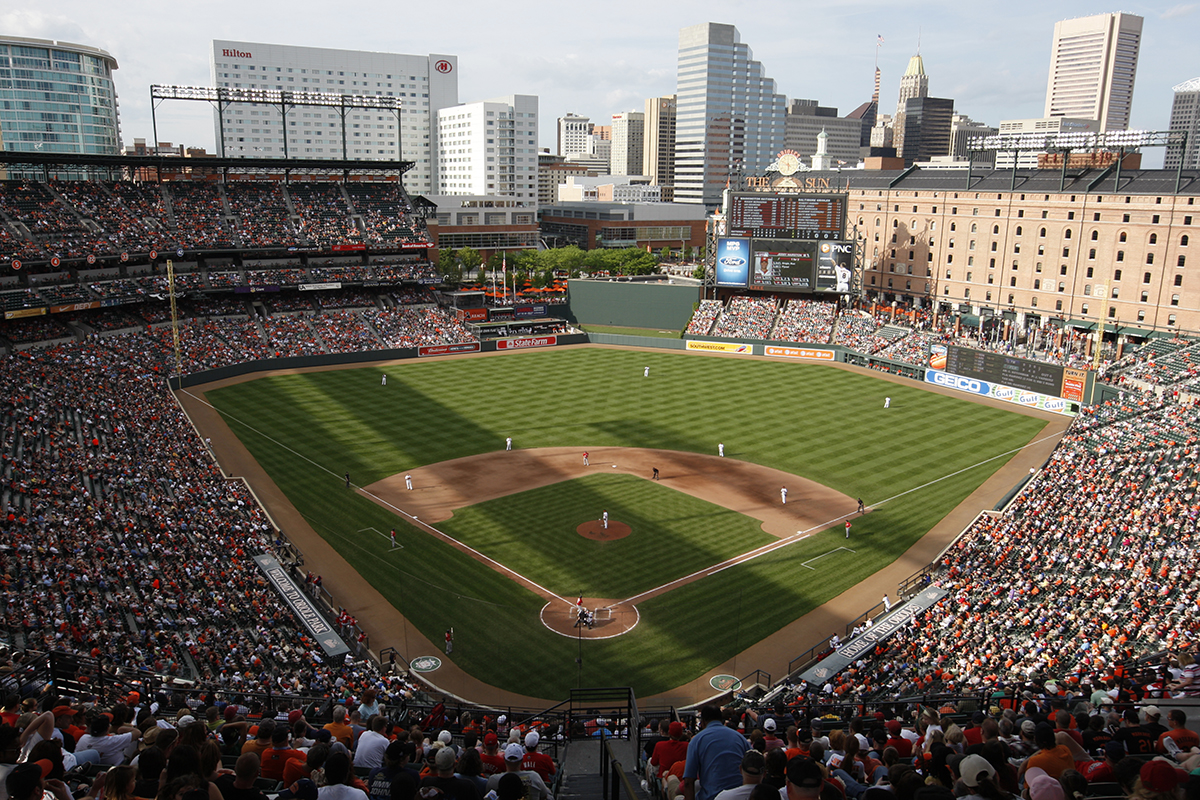 A new baseball season was beginning in Baltimore. It brought lots of promise as the Orioles opened their new ballpark at Camden Yards. The ballpark was located in the heart of downtown with the historic B&O warehouse beyond right field and the Baltimore skyline behind that.

It provided a link between the old and new for the city and fans of the Orioles. Mark Kram of the Philadelphia Daily News wrote about the Orioles’ new home: “On this blessed spot where Baltimore-born Babe Ruth tended bar for his father, where the past and the present are so artfully linked, the imagination is indeed apt to soar.”1

A crowd of 44,568 poured into the ballpark to watch the Orioles take on the Cleveland Indians. One of them was President George H.W. Bush, who threw out the first pitch. People in the stands hoped that the new ballpark would help to bring back the glory days of Baltimore baseball.

The Orioles finished the previous season with a 67-95 record, sixth in the American League East Division. The Indians were the one team in their division with a worse record. After finishing in the AL East cellar with a 57-105 record, the Indians, like the Orioles, were looking to turn things around in 1992.

Rick Sutcliffe took the mound for the Orioles. The 35-year-old right-hander had signed with the Orioles in the offseason. Baltimore manager Johnny Oates said, “I’ve seen him pitch in a lot of big games.”2 Oates had pressed the front office to get Sutcliffe because he felt that the young Orioles pitching staff needed the leadership the veteran pitcher could provide.

Sutcliffe was also looking to prove something. He was coming off two years of shoulder problems and there were questions about whether he could be a key part of the starting rotation.

Sutcliffe showed immediately that his arm was still solid. He also exhibited no signs of the food poisoning that had stricken him and seven other Orioles after an exhibition game two days earlier.

Sutcliffe breezed through the first inning, retiring the Indians on 12 pitches. He continued to send the Indians back to the dugout efficiently as the game continued. Paul Sorrento singled in the second and it turned out that he would be the only Cleveland scoring threat all afternoon.

It looked as though the Indians might strike first when Sandy Alomar came to bat with two outs in the second and hit one that looked like a certain double. But Mike Devereaux ran it down and made a challenging over-the-shoulder catch for the third out. Sutcliffe praised his teammate later, saying, “That play [Devereaux] made. I thought the ball was out of here. That was the kind of catch I’ve seen clips of Willie Mays making.”3

Cleveland manager Mike Hargrove started Charles Nagy. Although Nagy had finished the previous season with a 10-15 record, he improved his ERA by almost two runs, 5.91 to 4.13 in 1991. His start was briefly jeopardized earlier in the day when Nagy was denied entrance to the ballpark after walking over from his hotel and asking for the ballplayers’ entrance.

Nagy also started out strong. Although he surrendered a pair of singles in the second, the Indians defense prevented the Orioles from scoring. He matched Sutcliffe through the first four innings, giving up just three hits and allowing only one Orioles batter to hit the ball out of the infield.

After Sutcliffe got out of his half of the fifth, the Orioles finally got the best of Nagy. With one out he walked Sam Horn and gave up a single to Leo Gomez. Catcher Chris Hoiles then hit the second pitch from Nagy to deep left-center. It bounced on the warning track and went over the wall for a ground-rule double. Horn crossed the plate and the Orioles had their first run. With runners on second and third, Billy Ripken dropped a perfect suicide squeeze bunt down the third-base line. Gomez scored and Sutcliffe had a two-run lead to work with.

“Everybody in the dugout had the feeling that they were going to squeeze,” said Nagy after the game. “I tried to throw the pitch up and in to Ripken, but I just didn’t get it up and in enough and he got the bat on the ball.”4

It turned out to be all that Sutcliffe needed. The Indians managed just two more hits against him, a second single by Sorrento in the seventh and a bunt single by Kenny Lofton in the eighth. Cleveland failed to capitalize on either hit.

Sutcliffe got the Indians out in order in the ninth to earn a complete-game victory. He wasted no time and threw just 110 pitches to finish the game in a little over two hours. It equaled the shortest Orioles home opener, played in 1954. Orioles fans were also treated to the first complete game on Opening Day in 20 years. Dave McNally had last accomplished the feat when he beat the Milwaukee Brewers in 1973.5

Hoiles praised Sutcliffe’s pitching performance, saying, “He knew what he wanted to do. He’s got so many different pitches to get a guy out with. He’ll show you so many different looks. He knows how to start and finish a hitter and that’s what he did all day long. When he needed a big out, he got it.”6

Nagy didn’t let the two runs slow him down. He continued to pitch well and the Orioles mustered only one more hit off him the rest of the afternoon. Hargrove said, “I thought that Nagy was as good as Sutcliffe today. It was a well-pitched game on both sides, but they got the big hit when they needed it. That was the difference.”7

Hoiles presented the game ball to Sutcliffe as he walked off the field. Sutcliffe gave the ball to Oates, saying, “I wouldn’t be here if not for [him]. I can’t say enough about the guy. It’s his first managing job. It’s the first game in this stadium. He put his neck on the line for me. I was just happy for the opportunity.”8

The Orioles celebrated the win and, with it, hopes for brighter days ahead in their new home. It helped them to forget their embarrassing loss in the final Opening Day at Memorial Stadium the previous season. The win also helped them to push aside their embarrassing loss “when they were crushed by the Detroit Tigers in the emotion-packed season finale”9 at their old home six months earlier.

Although the team and fans left feeling optimistic about the season, Sutcliffe tried to put it in perspective when he said, “This is going to be one of the great moments for myself and everybody but I haven’t proven anything yet. This is just one game. We’re 1-0 and we’re right where we want to be. But I have to put together a great year – not just a great game.”10

The author attended this game with his sister after witnessing the closing of Memorial Stadium the previous fall. Spring was arriving in Baltimore and the sun was shining as everyone arrived at the Orioles’ new home. He fondly remembers the excitement of the fans as they crowded into Camden Yards with hopes that the new ballpark would begin a new era in Baltimore’s baseball history.

In addition to the sources cited in the Notes, the author used the Baseball-Reference.com and Retrosheet.org websites for box-score, player, team, and season pages, pitching and batting game logs, and other material pertinent to this game account.