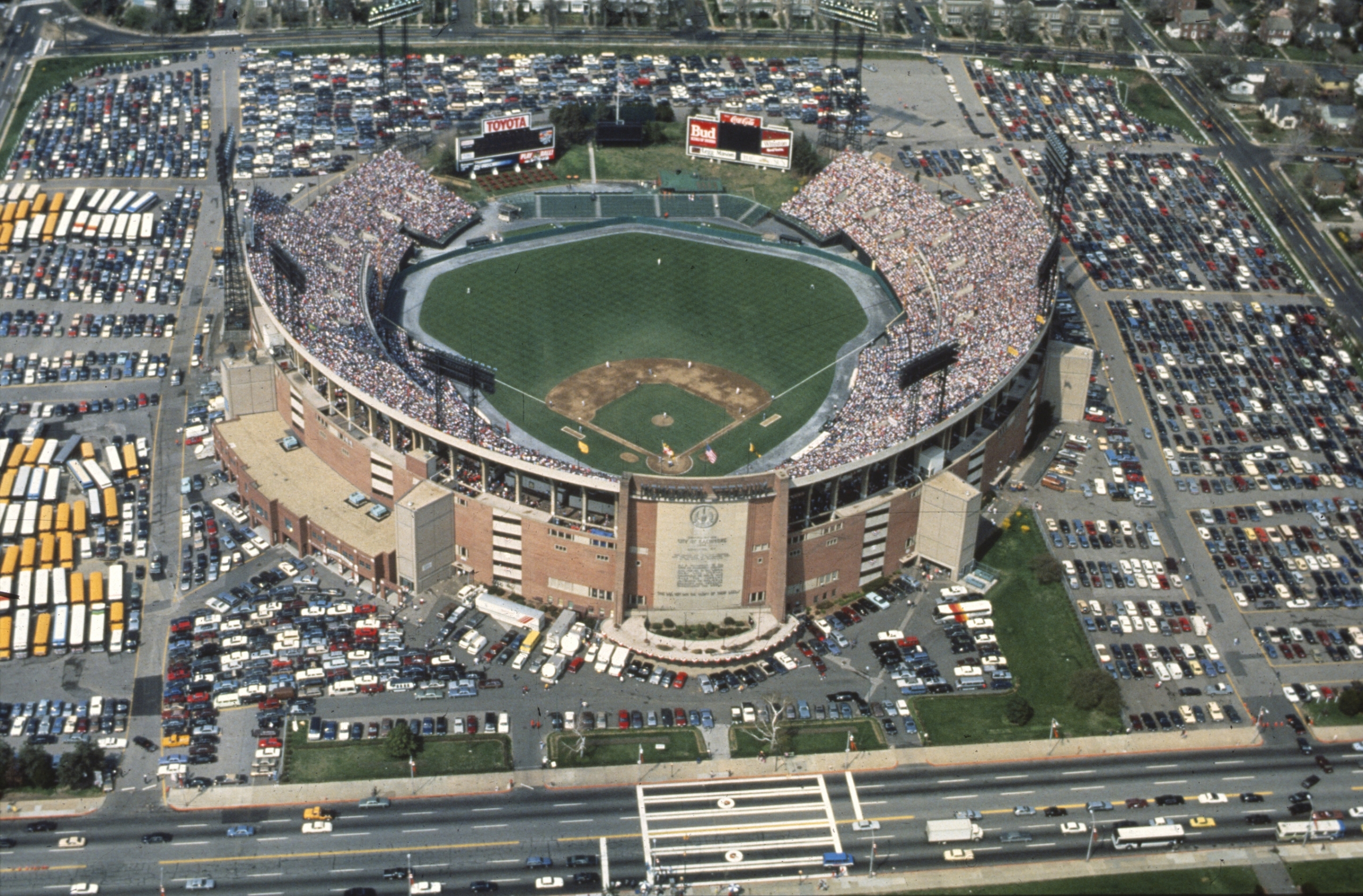 For many fans, it was bittersweet to see the ballpark, which had been the site of six American League pennants and three World Series titles, close its doors. John Eisenberg of the Baltimore Sun wrote about “the moments or rituals that made you feel franchised at Memorial Stadium, as if the place suddenly were your own.”1

Memorial Stadium was packed for the game although the Orioles were finishing a dismal season. They had a 67-94 record heading into the final day of the campaign. Their opponent, the Detroit Tigers, tried to stay in contention most of the season but finished tied for second place behind the Toronto Blue Jays.

Bob Milacki got the starting nod for the Orioles. He led the pitching staff with 10 wins. Milacki had pitched nine solid innings in his last outing but didn’t earn the win when the Orioles lost to the Yankees in 11 innings. “I thought I was going to be nervous going into the game, but I wasn’t,” the 28-year-old right-hander said after the game about pitching the last game in a ballpark that held good memories for so many fans and players.2

The Tigers wasted no time scoring as they sent eight batters to the plate in the first. Milt Cuyler led off with a single and landed on third when Lou Whitaker reached on an error by first baseman Glenn Davis. Lloyd Moseby followed with a single to bring Cuyler home. After Cecil Fielder fouled out, three more Tigers singled to plate three more runs. By the time Travis Fryman grounded into a double play, the Orioles were already in a deep hole.

The Orioles gave the fans some hope when Mike Devereaux tripled to lead off the bottom of the first inning and scored on Joe Orsulak’s fielder’s-choice grounder. It turned out to be the only run the Orioles would score all afternoon.

Milacki held the Tigers scoreless in the second and retired the first two batters in the third. But then he walked Tony Phillips and surrendered two singles to send Phillips across the plate with the fifth Tigers run. Orioles manager Johnny Oates replaced Milacki with Todd Frohwirth. Milacki said he felt fine warming up but “it was just one of those days when it didn’t happen. I just pitched bad. Basically, I gave up a few early hits and it snowballed on me. I wish that I could have ended things better.”3

Meanwhile Frank Tanana, the Tigers starter, shut down the Orioles after the first inning. Tanana entered the game with a 12-12 record. After giving up the run in the first, he didn’t allow another hit until the fifth. “After Mike’s hit, I was pretty much in control,” Tanana said afterward.4

The Orioles got back-to-back singles in the fifth but were unable to capitalize on them. Tanana got the next three batters out on six pitches and none of the balls left the infield. Glenn Davis’s leadoff single in the seventh was the last hit by an Oriole at Memorial Stadium.

It was the second time in the season that Tanana won in the opening or closing of a ballpark. He beat the White Sox in the first game at Chicago’s new Comiskey Park on April 18. Tanana pitched a complete game that day and did the same against the Orioles. He had also spoiled the stadium opener for the Seattle Mariners in 1977. Of the Orioles game he commented, “When you get 14 hits and seven runs like that, you should win.”5

In the eighth inning, the fans began calling for Mike Flanagan to come out of the bullpen. Flanagan started his career with the Orioles in 1975. He had been a starter when they lost to the Pirates in the 1979 World Series and when they won the 1983 World Series.

Flanagan had pitched for Toronto for the past four seasons. He had returned to the club this season and was one of the stalwarts in the Orioles bullpen. He made 63 appearances before this game and entered it with a 2.40 ERA.

But Greg Olson took the mound in the top of the ninth. He got Phillips out on a weak grounder to first. After the play, Olson called his manager to the mound. “I wanted to get in the game and face a hitter. That was all I wanted. Then I wanted to get him out here. Flanny is the fan’s favorite. Everything that has gone on here means so much to him,” said Olson.6

As Flanagan finished his warmup pitches, the scoreboard announced that he had agreed to come back for the 1992 season. The crowd cheered on the fact that he “was ringing out the old and would be back to ring in the new.”7 Flanagan faced two batters and struck out both as the crowd roared approval.

“All weekend I’ve looked around, and there’s no part of the park that I can look at and not see things people had done over the years. Out there today, I thought of all the players who never got to come back for one last ovation,” Flanagan told reporters after the game.8

In the bottom of the ninth, Devereaux struck out swinging but reached first on a passed ball. Joe Orsulak flied out to center field. The last chance to create some magic fell to Cal Ripken Jr. When he hit into a double play, it probably didn’t matter to many of the fans.

They had spent the season watching Ripken play perhaps the best season of his life. Ripken would soon win his second MVP award. He shared his disappointment at making the final out when he said: “I kind of went outside of myself and tried to do more than I could. In the back of my mind, I wanted to hit a home run, and that’s the worst thing that you can do.”9

After the final out, the celebration finally began. The Orioles introduced the stars who had made so many memories at the ballpark. First the all-time Orioles team was introduced. Brooks Robinson took his old position at third base followed by Frank Robinson and Boog Powell. After Jim Palmer took his place on the mound, a parade of other Orioles took the field. All told, 78 players lined up around the infield as the crowd stood cheering.

“I just can’t put it into words, but I just got that feeling. That’s the Oriole team, the winning spirit, the fans,” said Orioles first baseman Randy Milligan.10

As the ceremony drew to a close, Frank Robinson made the last run from third base to home plate. Then the plate was removed by the grounds crew and placed in a stretch limousine. It was sent across town to Camden Yards under police escort. Minutes later, the crowd watched on the scoreboard as it was put in place at the new ballpark, an important connection between the old and the new for Orioles fans. 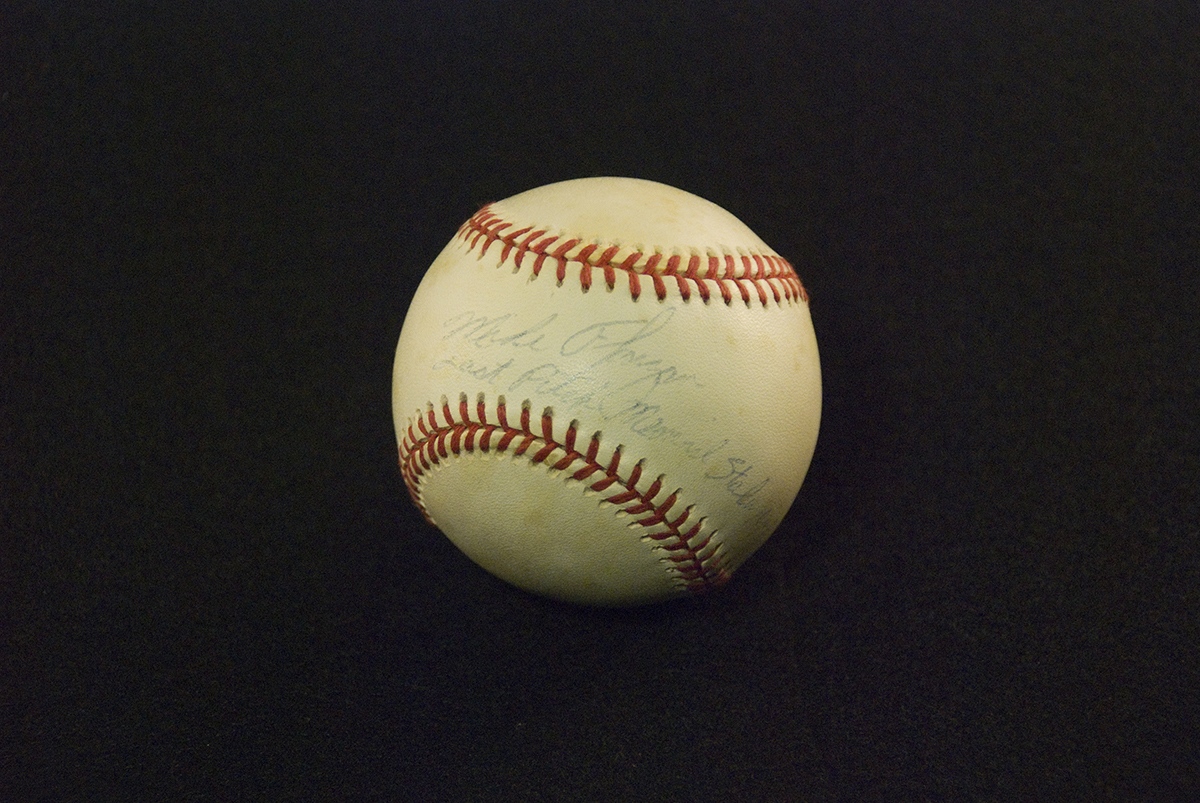 The ball Mike Flanagan threw for the last pitch thrown by an Oriole at Memorial Stadium, October 6, 1991. (Courtesy of the Babe Ruth Museum.)

The author attended this game with his sister. He remembers that it was a chilly day in Baltimore but that didn’t prevent him from having a chill go up his back as he watched all the former Orioles take the field after the game while every fan stood in appreciation of their hometown heroes.

In addition to the sources cited in the Notes, the author used the Baseball-Reference.com and Retrosheet.org websites for box-score, player, team, and season pages, pitching and batting game logs, and other material pertinent to this account.