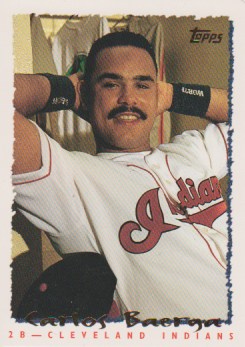 After a tragic spring training that saw the deaths of Steve Olin and Tim Crews in a boating accident, the Indians opened the 1993 baseball season at home with the Yankees. The opener on April 5 attracted 73,290 fans who witnessed a Yankee victory. Cleveland earned the win on April 7 to set up the rubber match. The weather on April 8 was surprisingly pleasant by Lake Erie. A crowd of 13,834 attended the game hoping for a Tribe victory. None could have anticipated the events that would transpire.

Cleveland was in the midst of the rebuilding project that would make them an American League powerhouse for half the decade. Future stars in the lineup included Kenny Lofton, Albert Belle and fan-favorite Carlos Baerga who had just inked a long-term, $26 million contract. The pitching staff was still a work in progress and on this evening, the Tribe sent free agent pick-up Mike Bielecki to the hill for the first of his 13 appearances that year. Bielecki would be released on June 19 after compiling a 4-5 record and 5.90 ERA, all as a starter.

The Yankees sent Bernie Williams to the plate, and he promptly doubled to the left-center gap. Wade Boggs grounded out before Don Mattingly hit a weak grounder to short for an infield single. Danny Tartabull flied out and Paul O’Neill went down swinging to end the New York threat. In the bottom half of the first the Yankees sent young Sam Militello to the mound. The youngster had shown promise in 1992 with a 3-3 record and a 3.45 ERA. He coaxed Lofton into a grounder to second, but then surrendered a single to third baseman Jeff Treadway and a double to Baerga. Belle hit a slow roller to third that scored Treadway. First baseman Paul Sorrento followed with a double to right putting Cleveland ahead 2-0.

In the second Bielecki and Militello, each issued a walk, but escaped without any damage. In the top of the third Bielecki retired Williams, Boggs and Mattingly in order. Militello got Treadway on a grounder, but Baerga and Belle both singled to set up a first-third situation. On Militello’s first delivery to Sorrento, he grounded to Pat Kelly at second who misplayed the possible double play. Baerga scored, Belle went to third and Sorrento made it to second. Reggie Jefferson was intentionally walked. On a 1-2 count, Glenallen Hill launched a deep drive to center for a double. Baerga and Belle scored easily, but Matt Nokes tagged Jefferson out at home on a strong relay from Owen. Cleveland led 5-0 and manager Buck Showalter replaced Militello with Rich Monteleone. Sandy Alomar greeted his first pitch with a grounder towards the hole at shortstop. Hill tried to avoid the batted ball but was tagged for the third out.

Bielecki only needed twelve pitches to dispatch the New Yorkers in the fourth. Unfortunately, for him, Paul O’Neill deposited one of them in deep right for a home run to cut the gap to 5-1. Monteleone allowed a single to Treadway in retiring the side. Spike Owen singled to lead off the fifth, but Bielecki struck out Kelly and Boggs and retired Williams on a liner to left. Monteleone breezed through Belle, Sorrento and Jefferson in the bottom of the frame. Bielecki surrendered a run in the sixth on a lead-off double by Mattingly and a single by O’Neill. Monteleone returned to the hill in the bottom of the sixth and was greeted by a triple from Hill. Alomar flied out to short left before Felix Fermin dropped a squeeze bunt up the first base line to run the score to 6-2.

Bielecki had tossed 87 pitches in his first appearance since July 1992 when manager Mike Hargrove turned the ball over to veteran Ted Power who was coming off a strong 1992 season. Power gave up consecutive, second- pitch singles to Owen, Kelly and Williams to load the bases. Power was replaced by lefty Kevin Wickander. Boggs struck out swinging and Mattingly popped a foul fly to third. Tartabull singled on a ball knocked down at third by Treadway to score Owen. Jim Leyritz was sent in to pinch-hit for O’Neill and delivered a two-run single to right. The Tribe lead was cut to 6-5. With two outs, a chess game ensued. Showalter announced Mike Stanley as the hitter for Nokes. Hargrove countered by bringing in Eric Plunk. Stanley was called back and Dion James faced Plunk grounding out to second on the first offering.

Lefty Steve Howe took the mound in place of Monteleone so Alvaro Espinoza replaced the lefty Treadway at third and batted leadoff in the seventh. Espinoza singled to right, and on a full count Carlos Baerga launched a home run to left-center to put the Indians up 8-5. The floodgates were opened when Howe hit Belle and then surrendered singles to Sorrento, Jefferson and Hill before giving way to Steve Farr. The former Tribesman retired Alomar and Fermin, but then allowed a single to Lofton and a three-run homer to Espinoza on a full count.

The crowd was ecstatic. Espinoza was not regarded as much of a hitter and he had two hits in the inning, including a home run. The fans had barely settled into their seats when Baerga slammed a pitch over the fence in right-center. Back-to-back homers cause a lot of excitement, but two homers by Baerga in the same inning. How often does that happen?

During Belle’s at-bat the scoreboard proclaimed that Baerga was the first Indian to hit two homers in an inning and the first major leaguer to do it from both sides of the plate, righty against Howe and lefty versus Farr. Farr was noticeably upset and threw dangerously close to Belle on the first pitch. Farr was ejected and the remainder of the game was anticlimactic.

Baerga at first did not believe he had set a record. “When I got to the clubhouse after the game, Bobby DiBiasio, our public-relations man, told me I’d set a record.” Carlos hit .500 in the three games with New York.[fn]Paul Hoynes. “Baerga’s Blast Rips Yanks,” Cleveland Plain Dealer, April 9, 1993.[/fn] The hot start propelled him to career highs in homers (21), RBI (114) and batting average (.321). The Indians finished below the .500 mark for the last time in the twentieth century.

My youngest son and I attended this game. The Indians ownership was trying a new gimmick. For a fee of $15 or 20 you could sign up for an inning and work with a technician in the upper deck broadcasting an inning. They gave you a cassette tape to keep of your session. We did the first inning and had a blast, so we signed up and did the fourth. We contemplated doing the seventh, but as luck would have it, finances got in the way. I have to admit that the homer by Espinoza came as such a surprise that it took all of us a little while to realize what Baerga had accomplished.