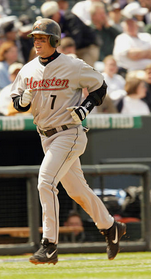 The Colorado Rockies had played the first six games of their 2002 season on the road, earning only two wins. On April 8, a sellout crowd of 50,392 came through the turnstiles at Coors Field, full of excitement in celebration of the Rockies’ home opener against the Houston Astros.

Left-hander Denny Neagle was making his second start of the year for Colorado. In his previous outing, the 11-season veteran had limited the St. Louis Cardinals to one run on five hits in six innings pitched. Now Neagle was opposed by the reigning National League Rookie Pitcher of the Year, , who got the nod as the Astros’ starter.

Leadoff man Craig Biggio started the game by hitting Neagle’s second pitch into center for a single. With one out, he was erased on a double play when Jeff Bagwell grounded the ball to shortstop. Larry Walker likewise ended Oswalt’s hopes of a no-hitter when he singled to right with two down in the bottom of the first.

In the second inning, the Astros took the lead on Richard Hidalgo’s first homer of the season. An inning later Houston added three more runs. After Oswalt struck out, Biggio lined the ball into the left-field corner. The ball skipped off the wall in foul territory and shot past left fielder Todd Hollandsworth. Biggio just kept on running, and by the time the ball was relayed to the infield, he was on third base with his first triple of the season. Brad Ausmus brought him home with a bloop single to short left. After Neagle retired Bagwell, Lance Berkman launched a home run over the wall in left-center. It was Berkman’s fourth round-tripper of the young season, and it gave Houston a 4-0 advantage.

Two more tallies went on the scoreboard in the fourth, when Biggio cracked a home run on a 1-and-1 count from Neagle. Brian Hunter, who had singled to lead off the inning, scored ahead of Biggio and the lead became six runs.

Oswalt was dominating on the mound through the first six innings. He did allow a hit in the third and two more singles in the fifth, but he worked out of both innings to keep the shutout intact. The Astros’ Morgan Ensberg led off the top of the sixth with a line-drive single to right-center. Hunter forced him at second, then advanced to second when Neagle threw a wild pitch with Oswalt in the batter’s box. Oswalt hit a comebacker to the mound, bringing Biggio to the plate with a runner in scoring position. The Rockies decided to intentionally walk the hot Biggio. But when Neagle also walked Ausmus, Colorado manager Buddy Bell made a pitching change. Right-hander Rick White strode to the mound with the bases loaded and two outs. He quickly got ahead of Bagwell and on a 1-and-2 count, Bagwell grounded to third for the final out of the inning.

Todd Zeile led off the bottom of the seventh with a home run, his first of the year, and the Rockies were on the scoreboard. Yet the Astros countered with a run in the top of the eighth. With another right-hander, Mike James, now pitching for Colorado, Ensberg drew a four-pitch walk. Hunter grounded a ball to short, but Juan Uribe couldn’t make the play and was charged with an error. Oswalt worked a full count but fanned, bringing Biggio back to the batter’s box.

With two on, Biggio rifled a pitch just past third base. The ball caromed off the wall in foul territory and then bounced off the wall in left field, where Hollandsworth scooped it up and threw toward home. Biggio stopped at second with a stand-up double that had cleared the bases. He had just completed hitting for the cycle. Houston now led 8-1. In the clubhouse after the win, Biggio spoke about batting in the seventh, with the single, triple, and home run already done. “Well, you know what you need,” he said. “But the last thing you’re trying to do is hit a double. I was just trying to hit the ball hard. That’s what I’m trying to do every time up.”1

Colorado finally got to Oswalt in the bottom of the eighth inning. Uribe led off with a single and scored when Walker bashed a homer over the wall in left-center. Oswalt’s day was finished, and Nelson Cruz entered in relief. Todd Helton greeted him with a single. Zeile popped out to the catcher but Hollandsworth followed by lining a double down the left-field line. Houston manager Jimy Williams didn’t hesitate, pulling Cruz in favor of hard-throwing Octavio Dotel. Jose Ortiz lifted a sacrifice fly to center, and suddenly the Rockies had cut the deficit to four runs. Dotel retired Gary Bennett to end the inning, and despite allowing a two-out triple to Uribe in the ninth, struck out Walker to end the game and preserve the Astros victory.

Before the Denver series Biggio was batting only .174 (4-for-23). He finished this game with a 4-for-4 performance, adding a walk, two runs scored, and four RBIs. His average shot up to .296 (8-for-27). These were his first runs batted in of the season. The four RBIs would be a season high. (He also drove in four runs in a May 26 game against the Chicago Cubs.)

Oswalt was tagged for 10 hits and three runs, but he struck out six and did not allow a walk as he won his second decision of the young season. Interestingly, Oswalt was the starter when Bagwell hit for the cycle on July 18, 2001, at Enron Field in Houston. After the game, Colorado manager Bell said he thought that both Biggio and Bagwell belonged in the Hall of Fame. The Austin American-Statesman quoted Bell as saying, “Biggio is one of the premier leadoff men who has played the game, and Bagwell is just so productive. I think it’s neat and good for baseball that these two guys have been able to stay with the same organization.”2 Biggio’s own skipper Williams appreciated the performance, too, saying, “When you have a single, double, triple, and home run, that’s pretty special. It doesn’t happen very often. It certainly came at the right time, because he drove in some big runs for us. That’s got to pick him up. It certainly picks us all up as a team.”3

Biggio’s feat marked the sixth time that an Astros batter had hit for the cycle. The others were Cesar Cedeno (August 2, 1972, and August 9, 1976), Bob Watson (June 24, 1977), Andujar Cedeno (August 25, 1992), and Bagwell (July 18, 2001). Only one other batter hit for the cycle in the majors in 2002: Arizona first baseman Greg Colbrunn accomplished the cycle on September 18, against the San Diego Padres. Colbrunn added a second home run in that contest, going 5-for-6 with four runs batted in and four runs scored, a career day. His ninth-inning triple needed for the cycle was only his second three-bagger of the season.4

Future Hall of Famer Biggio achieved the rare feat of hitting for the cycle in his 15th season in the big leagues. After the game, he told reporters, “Fifteen years is quite a while. It’s something that you have to get during the course of the day. I caught a couple of breaks.”5 He added, “It’s a special day. It’s a lucky day when something like that happens. It’s kind of cool.”6

In addition to the sources mentioned in the Notes, the author consulted baseball-reference.com, mlb.com, retrosheet.org, and sabr.org.