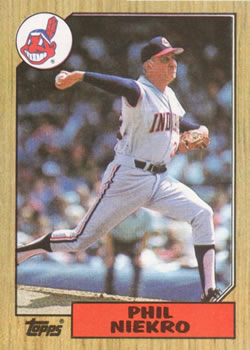 Cleveland fans had high expectations for a banner year for their Indians in 1987. Cleveland ended 1986 in fifth place in the American League East Division with an 86-78-1 record. It was their loftiest record since 1968, when they finished in third place at 86-75-1.

The current edition of the Tribe had some good young talent up and down the order. The mix of power (Brook Jacoby, Joe Carter, and Cory Snyder) combined for 80 home runs was combined with speed (Brett Butler and Tony Bernazard) swiped 49 stolen bases and hitting (Julio Franco .306 batting average and Pat Tabler .326) to present opposing pitchers with a formidable lineup.

Their pitching staff comprised four starters who had 10 or more wins in 1986. Tom Candiotti (16), Ken Schrom (14), Phil Niekro (11), and Scott Bailes (10) would be joined in 1987 by 1986 first-round pick Greg Swindell and veteran southpaw Steve Carlton. Lefty was the author of 323 career wins when he signed with Cleveland on April 4. The 1986 season had been a rough one for Carlton; he posted a 9-14 record with a 5.10 ERA between three teams (Philadelphia, San Francisco, and Chicago White Sox).

But the final validation came from an unexpected source. Sports Illustrated put Snyder and Carter on the cover of its April 5, 1987, Baseball Issue. The cover headline read “Indian Uprising: Believe It! Cleveland Is The Best Team in the American League”1The Cleveland fans were rocking as a national magazine was giving props to the Tribe. Indeed, maybe the pendulum was about to swing in the other direction and it was about time.

Cleveland opened the season in Toronto with a three-game series at Exhibition Stadium. Toronto won the AL East in 1985, nipping New York by two games. The Blue Jays slipped to fourth place in 1986, two games ahead of Cleveland.

But there was no overlooking the Jays. They had perhaps the best outfield in the junior circuit with Jesse Barfield, Lloyd Moseby, and George Bell. Designated hitters Cecil Fielder and Fred McGriff and first baseman Willie Upshaw provided some additional power. Tony Fernandez was an offensive threat at the top of the Toronto order.

Indians fans’ enthusiasm was tamped down a bit as Jimmy Key beat Candiotti and the Indians in the opener, 7-3. Veteran hurler Jim Clancy followed suit, as he shut down the Tribe’s offense: The Blue Jays beat Swindell and the Tribe, 5-1.

The pitching matchup for game three was Niekro for the Indians and Joe Johnson for the Blue Jays. Like Carlton, Niekro spent most of his career in the National League before joining Cleveland. “Knucksie” also won more than 300 games (311) prior to 1987 and like Carlton was a certainty for the Hall of Fame when their careers were over. Carlton was a southpaw who relied on a blazing fastball and a terrific slider, while Niekro mastered the knuckleball.

For comparison, Johnson was 13-9 with a 4.42 ERA in 1986 while pitching with both Atlanta and Toronto. Johnson had 44 career starts in two seasons.

The Indians struck early and often in the top of the first inning. The 21,088 fans were just getting comfortable in their seats when Cleveland scored six runs in the frame. The defining blow was a grand slam to left-center field by Snyder, his second home run of the young season. “I didn’t think it was out when I hit it,” said Snyder. “I thought it was off the fence for a double, but it kept going up.”2

Toronto got a run back in the bottom of the first when Rance Mulliniks and Moseby sent singles to right field and Mulliniks scored on a double by Bell. In the third inning, Bell led off with a triple and scored on a wild pitch by Niekro.

Bernazard connected for his first homer, a solo shot, in the top of the fourth and a 7-2 lead. Johnson did not come out for the fifth inning and was replaced by left-hander John Cerutti. Johnson gave up seven runs on seven hits in four innings; he struck out one, walked one.

Fernandez connected for a solo homer off Niekro in the bottom of the fourth inning for Toronto’s third run. Cerutti walked Carter to lead off the fifth, but got the next two batters. Jacoby then doubled to plate Carter and the Tribe’s lead ballooned to 8-3.

Cleveland plated four more runs in the sixth with Franco’s two-run homer being the big blow for an Indians 12-3 advantage. Carlton entered the game in the bottom of the sixth. It was his first relief appearance since May 11, 1971, when he was with St. Louis. “I told Phil that the next time he pitches, we can split the game up just like this one,” said Carlton.3

Carter added another run in the eighth with a solo homer, his first of the year. Carlton pitched four shutout innings as the Indians won their first game of the year, 14-3. Niekro was credited with the win, while Carlton picked up his first save since April 16, 1967. Johnson was charged with the loss.

For Snyder, it was feast or famine, which was the story of his career. After his grand slam in the first inning, he struck out four times. Jacoby and Carter each drove in three runs.

“I told Steve after the game that between us, we got 44 years in the big leagues,” said Niekro. “With that much experience, one of us ought to figure out how to get somebody out.”4

In the modern era, it was the first time two pitchers with 300 or more wins pitched for the same team in one game. Tim Keefe and Mickey Welch, both of the New York Giants, were the only other pitchers to accomplish the feat, in 1891.5

Unfortunately for the Indians, that was their only win in their first 11 games. They were on their way to a 61-101 record and last place in the AL East. It was their second 100-loss season in three years. Carlton and Niekro were both traded by season’s end. They were both inducted into the National Baseball Hall of Fame: Carlton in 1994 and Niekro in 1997.

Toronto finished two games behind Detroit in the AL East with a 96-66 record. The Blue Jays returned to the postseason in 1989, winning their division, and won back-to-back World Series championships in 1992 and 1993.

For their part, the Indians didn’t have a winning season until 1994, then won the AL pennant in 1995 (although they lost the World Series to the Braves). Perhaps that Sports Illustrated cover was a little premature.

The author accessed Baseball-Reference.com for box scores/play-by-play information and other data, aswell as