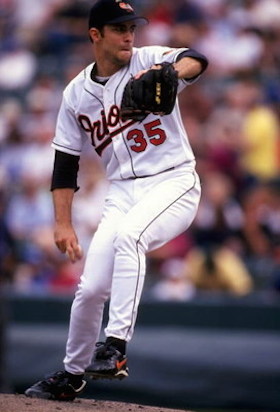 On August 1, the 2000 trade deadline had come and gone, but in the final days of July, the Baltimore Orioles had dealt many starting players to other teams, including Mike Bordick, Harold Baines, Charles Johnson, B.J. Surhoff, and Will Clark, as well as relief pitcher Mike Timlin. Baltimore was sitting in fourth place in the American League’s East Division, 12 games behind the New York Yankees. John Eisenberg, a sportswriter for the Baltimore Sun, defended the mass exodus, “The Orioles were awful. Going nowhere. And doomed to more of the same. Maybe the dismantling wasn’t executed perfectly, but the fact that it was executed at all is what really matters.”1 Their opponent on this first day of August was the Minnesota Twins, stuck in last place in the AL Central. The Twins, unlike the Orioles, did not make any last-minute deals.

One name not on the Baltimore transactions list was that of Mike Mussina. Pitching in his 10th season, Mussina was the ace of the Orioles’ staff. Coming into this contest, Mussina, with an earned-run average of 3.86, was receiving the lowest run support in the American League, getting only 3.29 runs per nine innings from his Baltimore batters.2 The right-hander had lost his last three decisions despite pitching two complete games. He was opposed by Minnesota’s Mark Redman, pitching in his first full big-league season, bringing a four-game win streak into Oriole Park at Camden Yards.

Baltimore had taken the first game of the three-game series the night before, and now was seeking its fourth consecutive victory. A crowd of 35,107 packed the ballpark to root for the Orioles, but they had to wait because the game was delayed for close to two hours by heavy rain. When the game did begin, manager Mike Hargrove inserted three new players into the Orioles lineup against the Twins. Mussina used 15 pitches to retire the Minnesota hitters in order. In the bottom of the first, Baltimore’s Brady Anderson led off with a walk. Recently acquired Melvin Mora3 also worked a four-pitch walk, and after Delino DeShields flied out, Albert Belle walked, loading the bases. Rookie Carlos Casimiro stepped into the batter’s box. The designated hitter had gone 1-for-3 in his major-league debut the night before. In this, his second and final major league game,4 he began the evening with a grounder to third, which brought home Anderson with Baltimore’s first run.

The Twins went 1-2-3 in the second, as Mussina struck out David Ortiz and Corey Koskie. In the home half, Brook Fordyce led off with a solo home run. Fordyce had been acquired on July 29 from the Chicago White Sox with three minor leaguers for Baines and Johnson.

Mussina continued to dominate, collecting a strikeout in the third and three more in the fourth. With two down in the fourth, he walked Midre Cummings on a full count. (There went the perfect game.) Fordyce came to bat in the bottom of the fourth and launched a one-out homer on the first pitch he saw from Redman, his second round-tripper of the game. The Orioles now led 3-0.

Through five innings, Mussina had notched 10 strikeouts against the Twins. At one point he had fanned six straight (and had recorded 10 straight outs via the strikeout). In the Baltimore half of the fifth frame, Anderson walked, Mora singled, and DeShields stroked an RBI single to center. Belle followed with a three-run blast off the left-field foul pole. This increased the Orioles’ advantage to 7-0 and matched the highest run support total for Mussina all the season. It also spelled the end of Redman’s time on the mound. Bob Wells entered in relief and retired the next three Orioles hitters.

Mussina took the no-hitter into the seventh inning. Denny Hocking sent a fly ball to deep left, and that was the first batted ball to leave the infield for the Twins. After Cummings grounded to first for the second out (Mussina covered the base for the out), Ron Coomer ended the no-hit bid by stroking “a solid opposite-field single.”5 Mussina later joked, “I knew that Coomer was going to get a hit off me, because he hits one every game.”6 Perhaps Mussina was rattled, as he then walked Ortiz, but Koskie grounded to first for the unassisted putout and end to the inning.

The Baltimore bats continued to sizzle. After Redman and Wells, Minnesota continued to use a carousel of pitchers with LaTroy Hawkins pitching the sixth, Eddie Guardado the seventh, and rookie Johan Santana the eighth. Luis Matos (who had been called up to the big leagues in June) and Mora hit singles in the eighth, and with two outs, DeShields knocked in the Orioles’ eighth run with a grounder into the hole at short. Third baseman Koskie made the stop but threw the ball away. DeShields was given credit for a single, and he and Mora now stood at second and third, respectively, when Belle crushed a two-run double down the left field line, making the score 10-0.

Jay Canizaro struck out looking to start the ninth for Minnesota. Hocking grounded out, and then Cummings and Coomer both reached on groundballs hit to the right side of the infield that were booted by Chris Richard and DeShields, respectively. Despite the two errors, Mussina was determined to dominate. As Ortiz stepped into the batter’s box to face Mussina, the fans “screamed, ‘Moose!’ – Mussina’s nickname – and held their hands alongside their heads to simulate antlers.”7 The crowd kept yelling as Mussina blew a fastball by Ortiz for the final out, setting an Orioles regular-season record with 15 strikeouts. He had tied his own club record, as he had also struck out 15 Cleveland Indians batters in Game Three of the 1997 American League Championship Series (a game the Orioles lost 2-1 in 12 innings – Mussina had struck out 15 batters in only seven innings pitched).

Mussina, who earned his seventh win of the season, was a bit philosophical in the clubhouse after the game, telling reporters, “Every day you go out there, you’re trying to do the absolute best you can and you hope good things happen to you. For some reason tonight, good things were happening.”8 He added, “Every pitch that I made a mistake on, they either took it or fouled it off.”9 The victory over the Twins increased Mussina’s career mark against Minnesota to 15-2. In addition to Mussina’s pitching masterpiece, the Orioles had erupted for 10 runs and 13 hits. Mora and DeShields had each connected for three hits, and Belle had driven in five runs.

Minnesota manager Tom Kelly had nothing but praise for Mussina, saying, “I’ve seen Mussina pitch a lot of good games over the years, but this game was as good as I’ve seen him. We were overmatched. He just dominated our batters.”10 Hargrove, the Orioles skipper, echoed, “The way he was throwing, I started thinking about the no-hitter in the second inning.”11 Fordyce had starred with the bat in his third game in a Baltimore uniform but said his biggest thrill came from being on the receiving end of Mussina’s pitches, commenting, “It was exciting for me to catch, just a fun night all around.”12

There had been a lot of speculation before the trade deadline involving Mussina and whether or not he would be on the trade block. The Orioles roster changes may have had a personal effect on Mussina, but he remarked after the game, “I’m looking forward to wearing the same number and dressing in the same locker and all those things for the rest of my career, if at all possible. We’re working on it and hopefully it’ll come about.”13

As it turned out, the 2000 season was Mussina’s last with the Orioles. He had led the American League in innings pitched (237⅔) and in shutouts (8), but his record was 11-15 (his first, and only, losing season since his rookie year, when he was 4-5). The power pitcher finished the season with 210 strikeouts, third-best in the league. His earned-run average was 3.79, but his run support for the season was 3.32, right about where it was before this game on August 1, a full three runs fewer than in the previous season and the lowest of his career. Orioles fans were not too surprised when Mussina became a free agent on October 27, 2000, and, on December 7, signed with the New York Yankees the day before his 32nd birthday.14

3 Mora was traded by the New York Mets (with Leslie Brea, Pat Gorman, and Mike Kinkade) to Baltimore in exchange for Mike Bordick on July 28, 2000.

4 Casimiro had signed with the Orioles as a nondrafted free agent in 1994 but did not get to the majors until the 2000 season. He played in two games, getting one hit (a double) in eight at-bats and driving in three runs.