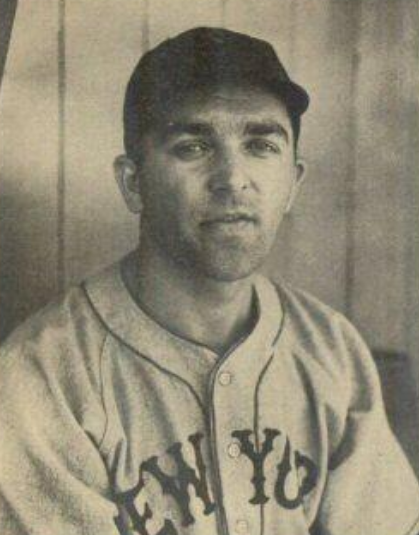 New York City sports fans with a few dollars in their pockets and a Wednesday afternoon free on August 11, 1943, had a choice. Both National League clubs were at home, so those with a baseball rooting interest could either catch the Dodgers at Ebbets Field or the Giants at the Polo Grounds. Those interested in harness racing1 had an unusual opportunity to experience the country’s premier trotting race, the Hambletonian, closer to home than usual — at Empire City Race Track in nearby Yonkers.

Like baseball, horse racing provided needed home-front diversion through World War II. The 1943 Hambletonian was being contested at Empire City because of gasoline rationing. The venue “could be reached by regular [New York City] trains and subways.”2

As the day’s events rolled out, 6,256 fans watched “Leo Durocher’s slap-happy [Dodgers] club”3 bring some joy to Brooklyn, snapping a 10-game losing streak to beat the Cincinnati Reds, 5-2, behind dependable Whit Wyatt. Wyatt, aging at 35 but still effective against wartime competition, tossed an efficient seven-hitter as the Reds jumped ahead with a run in the sixth inning but succumbed to five Brooklyn tallies in the seventh sparked by Luis Olmo’s triple, a pair of doubles, and a steal of home by Frenchy Bordagaray with two outs to cap the scoring. As Cincinnati Enquirer baseball writer Lou Smith put it in his sidebar column, “Bordagaray stole home in the seventh, much to the chagrin of our Mr. [Joe] Beggs, who was more interested in fiddlin’ around on the mound instead of keeping an eye peeled on the speedy Frenchman.”4

Over in Upper Manhattan, it was the 1943 National League’s version of David and Goliath. The defending world champion St. Louis Cardinals, 67-32 and cruising 14 games ahead of the second-place Pittsburgh Pirates, started a road trip against the cellar-dwelling Giants, 37-64 and 8½ games shy of seventh place. New York player-manager Mel Ott’s team had opened the current homestand with four straight losses to the Philadelphia Phillies. But today, with 5,964 faithful on hand, Ott sent out lanky Reuben Walter “Rube” Fischer. The South Dakota-born righty scattered six hits and kept the powerful Cardinals off the scoreboard through eight innings.

The Giants scratched out a lead run in the fourth inning on a single by Ott, a walk to Ernie Lombardi, and a throwing error by St. Louis starter Max Lanier on Sid Gordon’s sacrifice. Second baseman Nicholas Joseph “Mickey” Witek knocked a solo homer leading off the fifth to put the Giants ahead, 2-0. It was just Witek’s third round-tripper of the season.

As Fischer took that unlikely lead into the ninth, Harry “The Hat”5 Walker had already extended a 20-game hitting streak to 21 with a single in the sixth inning.6 He led off the St. Louis ninth with another single, went to third on Stan Musial’s base hit, and came home after Walker Cooper bounced into a 6-4-3 double play.

With two outs and the bases clear, Whitey Kurowski doubled and Ray Sanders walked. The wheels turned as Ott brought in Ace Adams to relieve Fischer. Cardinals manager Billy Southworth, applying “book” baseball, sent lefty-swinging Debs Garms up to hit for Danny Litwhiler against the righty Adams. The strategy worked. Garms singled to right field, scoring Kurowski to tie the game at 2-2. Adams closed out the inning by striking out Marty Marion.

With Lanier gone for a pinch-hitter in the eighth, Howie Krist was now pitching for the Cardinals. He’d gotten out of the bottom of the eighth after a leadoff walk to Ott, aided by the notoriously slow Lombardi’s double-play ball; he now retired the Giants in order in the ninth to send the game to extra innings.

The free baseball started with a scoreless St. Louis 10th. Adams allowed only a walk as he faced Krist and the top of the order.

Krist had navigated the heart of the New York offense without damage in his two innings of work, but had not yet faced Witek, the Giants’ hot hand; the second baseman already had his home run and two singles off Lanier when he led off the Giants’ 10th. And though “walk-off” wasn’t yet in use, that’s what happened when Witek “hit the rail in the upper left field stand for a home run,”7 delivering a dramatic 3-2 New York win right then and there. Despite Fischer’s excellent work – “one of the best Giant games hurled at the Polo Grounds this pitcherless year”8 – Adams got credit for the win.

At Empire City Race Track the same afternoon, 12,407 turned out and set new all-time betting totals for the Hambletonian.9

Though impacted by travel restrictions, racing, unlike baseball, didn’t lose top performers to military service. Many at Empire saw one of those top performers – Volo Song, acquired for $5,000 as a yearling in 1940 by Brooklyn warehouse owner William Strang. Under the tutelage of legendary 70-year-old trainer and driver Ben White, Volo Song established himself as the stakes trotter to beat as he launched his racing career as a two-year-old in 1942. In 1943, he had cruised to the top level of trotting, the Grand Circuit, with wins in the Matron Stake, American-National Stake, and the Hambletonian Test heading into the classic at Empire City.10

To test endurance as well as speed, major harness-racing stakes races were then and continue to be contested in a series of one-mile heats raced the same day. It would take victories in two heats to win the Hambletonian.11

That day at Empire City, Volo Song broke stride at the moving start of the first heat.12 As required by harness-racing rules, driver White had to move to the far outside until his horse regained trotting gait. Once back on stride, Volo Song “made up more than 10 lengths and hit the wire in third place, only a length and a half back.”13 Worthy Boy14 won the heat, with Darnley second in the original 11-horse field. The last five horses to finish were ruled out for the second and third heats, emphasizing the importance of Volo Song’s and White’s recovery efforts after the break. In the second heat, White guided Volo Song to the win he needed to stay in contention, with Phonograph second and Worthy Boy third. Volo Song then won the decisive third heat “in easy and convincing fashion”15 ahead of Phonograph and Gordon Gray. Worthy Boy faded to sixth.16

The Hambletonian victory was a back-to-back for White. He had driven another William Strang trotter, The Ambassador, to win the 1942 race at Goshen. The 1943 win was White’s fourth Hambletonian victory as a driver and fifth as a trainer, “both accomplishments unequaled for 35 years.”19

A creative sportswriter caught a baseball connection: “Things being what they are with the Dodgers, Volo Song’s triumph gave the Brooklyn Burghers something to cheer about, for it marked the second straight Hambletonian win for Bill Strang, the warehouseman from Flatbush.”20

Prior to the 1944 racing season, William Strang sold Volo Song to E.J. Baker of St. Charles, Illinois. Volo Song continued his supremacy, winning the Stallion Stakes at North Randall, Ohio, and setting a world-record time (1:57¾ for the mile) for four-year-old trotters. But in mid-July, while racing at the Walworth County fairgrounds in Elkhorn, Wisconsin, he badly fractured the ankle bone in his left foreleg. Typical for Volo Song, he was leading the field when the break occurred. “Given his fantastic career and enormous talent, an effort was made to save the horse but it was futile and he was euthanized July 19, 1944,”21 at Baker’s farm in Illinois.

My interest in the history of the earlier days of harness racing and my close following of the sport from the mid-1960s through the mid-1980s inspired this account.

In addition to the Sources cited in the Notes, I used the Baseball-Reference.com website for box scores, team and player pages, and batting logs. Play-by-play details of the Cardinals-Giants game come from Retrosheet.org and J. Roy Stockton’s game story in the August 11, 1943, St. Louis Post-Dispatch, page 2C, accessed through Newspapers.com.

1 While “harness racing” or “sulky racing” were and remain the popular terms, in horseman circles the term used is “Standardbred,” as differentiated from “Thoroughbred.” In Standardbred racing, drivers guide the competing trotters or pacers, which must remain on their particular gait. Jockeys are their counterparts in Thoroughbred racing, where the horses run on a level course without hurdles or other obstacles, hence the term “flat racing.”

2 Associated Press, “Harness Racing Plants Agree to Joint Meeting at Empire City,” Poughkeepsie (New York) Journal, July 2, 1943. The Hambletonian was first raced at Syracuse, New York, in 1926, then contested in the village of Goshen, Orange County, New York, from 1930 through 1942. After a single year at Empire City, the Hambletonian returned to Goshen for 1944 through 1957. It then moved to the DuQuoin State Fairgrounds in DuQuoin, Illinois, through 1980. In 1981 the trotting classic moved to the Meadowlands Racetrack in East Rutherford, New Jersey, where it remained as of 2017. “Hambletonian History,” Hambletonian.org, accessed March 21, 2017.

6 Walker’s streak reached 29 games before it ended on August 21 in Philadelphia.

7 J. Roy Stockton, “Witek’s Second Circuit Wins for Giants,” St. Louis Post-Dispatch, August 11, 1943: 2C. It was Witek’s fourth home run of the 1943 season. He finished with six, hit 22 in his seven-year major league career, and never before or after hit two in the same game. Retrosheet.org.

12 Video, “Volo Song Wins the Hambletonian Trotting Race,” YouTube.com, accessed March 23, 2017. The video, supplied through Critical Past.com, illustrates how Standardbreds, which must be on gait, begin a race in motion rather than from a standing start and shows Volo Song’s break in the first heat. It does, however, misidentify the venue for the 1943 race as Goshen, New York.

16 Results are from the day’s summary chart, the horse-racing equivalent of a box score, published in the Harrisburg (Pennsylvania) Telegraph, August 12, 1943: 24. In addition to the three Hambletonian heats on the August 11 Empire City race card, there were three other stakes races, two paces and another trot, each one contested in the same two-heats-to-win format as the Hambletonian.

19 “History of the Hambletonian.”