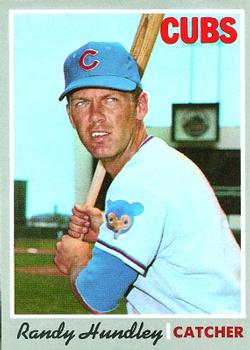 During the peak years of his 14 major-league seasons, before two knee injuries slowed him, Randy Hundley was regarded as a super-durable defensive player whose glove and leadership made him nearly indispensible to the Chicago Cubs. In 1970, when he suffered his first knee injury, manager Leo Durocher lamented, “If there’s one player I hate to see out … it’s Randy Hundley; he’s one guy we can’t replace.”1 Cumulatively over his four full-time seasons before that injury, Hundley ranked first among all major-league catchers for defensive WAR (he won the Gold Glove in 1967 and was an All-Star in 1969) and was the only catcher in either league who played at least 600 games at the position over that stretch.2

That performance was precisely what the Cubs were looking for from him when they acquired him in December 1965 in a four-player deal with the Giants – the Cubs swapping relief ace Lindy McDaniel and reserve outfielder Don Landrum for Hundley and hurler Bill Hands. Both players who came to Chicago had minimal major-league experience. Hands, a future 20-game winner, had pitched six ineffective innings in 1965, allowing 11 earned runs on 13 hits, while Hundley, to whom the Giants had given a $100,000 signing bonus before the 1960 season, had had two trials with San Francisco over the previous two years, going a combined 1-for-16 over eight games. After the deal, Durocher, who announced Hundley would be the team’s number-one catcher for 1966, said, “I wanted Hundley because he can catch, throw, and run. I just hope he can hit.”3

As it turned out, Hundley never had much more than modest success at the plate during his time in the major leagues: his lifetime average was only .236, with a career OBP of .292.

However, on August 11, 1966, in the middle of his rookie year, in front of a crowd of 11,860, he had perhaps his best day ever at the plate in a big-league uniform, hitting for the cycle in an 11-inning 9-8 Cubs victory over the Houston Astros in the opener of a doubleheader brought about by a rainout the day before.

By that point in the season, it was clear neither team was destined for success. Coming into the matchup, Houston stood eighth in the 10-team league, 15½ games behind Pittsburgh and in the midst of a string in which they had won only twice in their previous 10 games and four times in their previous 20. Meanwhile, the Cubs were even worse, as they were in last, already 28½ games out of first, though they had gone 5-5 over their most recent 10 games. Both Houston and Chicago would finish the season exactly where they stood on August 11.

For the visitors, Astros manager Grady Hatton, in his first year at the helm of a major- league club, started veteran right-hander Bob Bruce, who was 2-9 with a 5.74 ERA. Cubs skipper Durocher gave the ball to future Hall of Famer Robin Roberts, who was in his final season. Roberts had joined Chicago a month earlier as a pitcher-coach after the Astros released him after he had gone 3-5 with a 3.82 ERA and had lasted less than three innings in two of his final three starts for the team.  Headlines around the country about his release focused on the fact that Roberts, who then had 284 victories (more than any other active pitcher) had his sights set on 300 career wins.4 His performance early in his stint with the Cubs suggested that even with a new lease on a baseball career, Roberts likely would not get there. Coming into the August 11 game, his record with Chicago was 1-2 with a 3.92 ERA, and he was showing the same lack of stamina he had with the Astros. While he had totaled 28 innings in his first three starts for the Cubs (in one game he threw 11 innings with no decision), in his subsequent three starts he had managed only a combined 11 innings, including his previous outing, when he lasted only two innings because he had taken a line drive off his pitching arm in batting practice.5

Roberts ended up in trouble early on. Both hurlers got through the first without any damage – Roberts set down Houston in order and while Bruce allowed a one-out single to Glenn Beckert, he got out of the inning when Billy Williams grounded into a double play. But the Astros hit Roberts hard in the second.6 The first three hitters reached base on a double, a walk, and a single before Bob Aspromonte hit his fifth career grand slam, giving Houston a 4-0 lead; it was the first of six home runs Chicago and Houston would hit in the game. The Astros nudged the score to 5-0 when Rusty Staub hit a one-out solo shot in the third.

Hundley (who had been hot at the plate, going 5-for-8 in his two previous games, with three home runs and two doubles) batted for the first time in the third and struck out (the only time Houston retired him in the game). But the Cubs scored three when Don Kessinger singled and then Roberts followed with what would turn out to be the final base hit of his career, a single to right, before Adolfo Phillips hit the third homer of the game, making the score 5-3. Roberts gave up another home run in the top of the fourth, to Lee Maye, but then the Cubs tied the score in the bottom of the fourth, two of their runs coming on Hundley’s first hit of the day, a triple high off the wall in left center, that drove in Ron Santo and Ernie Banks, who had doubled and singled, respectively. Hundley came home on a single by Don Kessinger, making it 6-6 and ending the day for Bruce, who was relieved by Turk Farrell. As it turned out, Roberts was finished for the game as well, as Durocher pinch-hit for him with Marty Keough, who walked. Although the Cubs pushed two runners into scoring position when Kessinger stole second, then third, and Keough stole second, neither scored as Farrell got Phillips on a fly to center and Beckert on a groundball to short.

For the rest of regulation, the two teams traded the lead back and forth: The Astros went up 7-6 in the fifth when Chuck Harrison tripled off of reliever Curt Simmons with Sonny Jackson on third, but the Cubs tied it again in the seventh on a home run by Williams.  The Astros scored again in the top of the eighth when Morgan scored on a single by John Bateman, knocking out Simmons; his replacement, Cal Koonce, retired the side with no more scoring. The Cubs tied the score again in the bottom of the eighth on Hundley’s 16th home run of the season, his third hit of the day (he had doubled in the sixth) and it was still tied 8-8 until the 11th.

After Koonce retired the side in order in the top of the inning, Hatton sent Jim Owens in to pitch for the bottom of the inning and he did not retire a batter. Hundley led off with an infield single to short, completing his cycle, and went to second on a single by Kessinger. Durocher pinch-hit Lee Thomas for Koonce and he failed to sacrifice on two successive pitches before singling to left, scoring Hundley and winning the game for Chicago, 9-8.

As it turned out, the four innings Roberts pitched were his longest outing for the rest of the season. In his next start, he lasted two-thirds of an inning, giving up three runs, and in his start after that, the final one of his career, he lasted 1⅔ innings, again surrendering three runs, before making his last two major-league appearances in relief, earning his 286th and final victory in two innings of work against Atlanta on August 29. The Cubs released him on October 4.

As for Hundley: He set a league record for most games (149) and home runs (19) by a rookie catcher and wound up tied for fourth in the voting for Rookie of the Year Award, which went to the Reds’ Tommy Helms.

2 For statistics, the author used Baseball-Reference and the site’s Play Index tool

4 As an example, the Quad City (Illinois) Times, Lincoln (Nebraska) Evening Journal and Oshkosh (Wisconsin) Northwestern referred to Roberts’s chase for 300 in their headlines about his release.