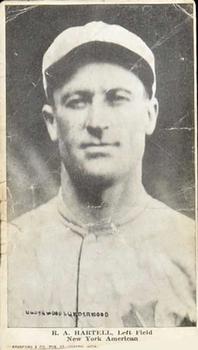 On August 12, 1911, the Washington Nationals played the third of a five-game series against the visiting New York Highlanders at National Park. Washington’s home grounds had burned down on March 17, but, amazingly, a new ballpark was built on the site in less than a month. Although it was ready by Opening Day, the final touches were not completed until a few weeks before this game.

The Washington nine had been ensconced in seventh place in the eight-team American League for most of the 1911 season. Recently the Nationals had shown some improvement, winning 15 of their last 20 games.

The Highlanders looked like one of the better teams in the loop in the early season but, plagued by inconsistent pitching as well as injuries, they quickly fell out of contention. New York had been fluctuating between the third, fourth, and fifth spots in the junior circuit standings since early April.

Fisher posted a 24-5 record with 243 strikeouts for the Hartford Senators in the Class B Connecticut State League in 1909. At the behest of Highlanders scout Arthur Irwin, New York purchased Fisher’s contract, along with that of infielder Jack Wanner, from the Senators for $5,000. Fisher was allowed to complete his studies at Middlebury College in Vermont before reporting to the Highlanders in 1910.

Fisher had a good fastball along with a variety of curves, yet he was best known for throwing the spitball. Sportswriters who covered his games noted that Fisher didn’t throw the spitter on every pitch but went through the motions as if he did. This psychological warfare between pitcher and batter worked to Fisher’s advantage throughout his career.

Cashion was playing for the Greenville Spinners in the Class D Carolina Association when he was purchased for $2,500, reported to be the highest price to date for any player from that circuit. Cashion was signed by Nationals scout Mike Kahoe. Cashion had made his big-league debut a week before, on August 4, squaring off against Chicago ace Big Ed Walsh. Cashion allowed just three hits that day in a 3-2 Nationals victory. The youngster’s pitching repertoire consisted of a lively fastball, hard-breaking curve and deceptive change of pace, but his control was lacking. Every now and then Cashion would drop down into an almost completely underhanded delivery. Considering his wildness, this submarine pitch created quite a bit of trepidation among opposing hitters.

August 12 started out as a hot and muggy day in Washington. By game time ominous storm clouds had moved directly over the ballpark, limiting the attendance to about 5,000.

Cashion started the contest on a bad note by walking leadoff man Harry Wolter. The next batter, Charlie Hemphill, lashed a single to right, Wolter scampering to the third on the well-executed hit-and-run. Washington right fielder Doc Gessler attempted to throw Wolter out on the play. Gessler’s heave from right bounced a few times before being knocked down by third baseman Wid Conroy. Sensing a chance to take an extra base, Hemphill bolted for second. Conroy hurriedly threw toward the middle of the diamond. Off the mark, the sphere rolled into right-center field. By the time the ball was thrown back into the infield, Wolter had crossed the plate and Hemphill was standing on second.

Hemphill stole third as Hal Chase struck out. A wild pitch to Birdie Cree allowed Hemphill to race home with New York’s second run. Cree eventually went down on strikes. The next batter, Jack Knight, grounded out to end the inning.

Fisher stymied the Washington batsmen in the bottom of the first, a theme that would play out for the rest of the afternoon. A potential New York rally was thwarted in the next inning thanks to a pair of nice plays by second baseman Bill Cunningham. For the next few frames neither team mustered up much offense.

In the fourth, Highlanders third baseman Roy Hartzell smacked a 3-and-2 pitch from Cashion high over the right-field fence for a home run. Hartzell had broken into the majors with the St. Louis Browns in 1906. After posting a .218 batting average in 1910, he was traded, along with $5,000 to the Highlanders for Jimmy Austin and Frank LaPorte. Hartzell came into the game against the Nationals hitting .300 with 17 stolen bases. This homer was his second of the season.

For the next few stanzas both pitchers were on their mettle. The Washington Evening Star observed, “Fisher could not be hit, his speed, control and most deceptive spit ball, which he bluffed with now and then made him almost invincible.”1

Cashion, behind in the count on nearly every batter, kept Washington in the game by mixing up his pitches just enough to keep the Highlanders batters off balance.

For the remainder of the contest a pitching duel ensued between the two young hurlers.

In the Highlanders sixth, first baseman Chase made a nice defensive play when he snagged a hot grounder off the bat of Clyde Milan then beat him to the bag for the putout.

Bill Cunningham, who recorded the first home run by a Washington player at National Park on June 2, nearly duplicated the feat off Fisher in the seventh. Cunningham’s long drive fell just a bit short as Highlanders outfielder Birdie Cree made a nice grab at the left-field fence after a long run.

The Highlanders eighth started with Wolter connecting for a triple. The next batter, Charlie Hemphill, hit a grounder to shortstop George McBride. Wolter, who broke from third on contact, was gunned out at the plate by a perfect throw from McBride.

The Nationals threatened in their half of the eighth. After Gabby Street grounded out, Cashion and Milan reached base via a pair of singles. Germany Schaefer, who already had two hits to his credit, stepped to the plate. With the count full, Fisher spun a slow curveball to the dish. Mistiming the pitch, Schaefer launched a high popup behind the plate that catcher Ed Sweeney was able to haul in near the stands for the second out. At that point Nationals manager McAleer removed Tillie Walker in favor of pinch-hitter Jack Lelivelt. Walker had been struggling against Fisher, going 0-for-3 with a pair strikeouts. The crowd cheered McAleer’s managerial strategy as Lelivelt had tripled in the Nationals’ extra-innings victory in the second game of the doubleheader the previous day. On this occasion Lelivelt fell victim to a Fisher breaking ball, grounding out to Chase to end the Nationals’ short-lived rally.

With two out in the top of the ninth, Hartzell stroked Cashion’s full-count offering into the gap in left-center field, the ball rolling to the fence. Clyde Milan quickly fired the ball toward the relay man, McBride, whose strong throw home landed in the catcher’s mitt seconds after Hartzell had crossed the plate, bumping up the score to 4-0. With this second round-tripper, Hartzell became the first player to hit two home runs in one game at the newly built National Park.

In the bottom of the ninth Fisher needed only five pitches to retire the side and seal the win.

He allowed six hits, four of which came with two outs, and walked one batter. He struck out four. No Washington runner advanced past second base. Cashion was touched up for eight hits and walked five in the loss.

Hartzell’s long-ball display along with a recent clout by Doc Gessler didn’t impress a Washington Times sportswriter who wrote under the pseudonym “Senator.” “There is something about a home run where the hitter has only to jog around the four sacks that takes much away from the value of his drive as a spectacle,” Senator wrote. “Short fences in the National League park at Boston have come close to killing the interest in the sluggers there, and it is to prevent this in Washington that manager McAleer wants a higher fence in right field.”2

The Nationals went on to post a 17-11 record in August. From there they reverted to their former ways, finishing the 1911 campaign in seventh place. Although he had another year remaining on his contract, McAleer left the Nationals at the close of the season to become president and part-owner of the Boston Red Sox. The underachieving Highlanders ended up one rung above Washington in sixth place. Hal Chase resigned as manager in November.

There were a few instances of conflicting information in the newspapers regarding specific plays during the game. The author endeavored to discern what actually took place by cross-referencing game information from available articles pertaining to the plays in question.