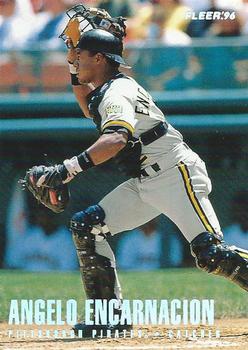 The Los Angeles Dodgers were having a weird week. Two nights earlier they had forfeited a game to the St. Louis Cardinals when their fans threw souvenir baseballs onto the field to protest the umpire’s strike calls.1 It had been 16 years since a major-league game had been forfeited (the infamous Disco Demolition Night game). The Dodgers, at 52-46, had started the day tied for the NL West Division lead with the Colorado Rockies, but the Rockies had won their game in Atlanta (16-4) just as this game got underway at 8 P.M. Pacific time. The Pittsburgh Pirates, at 40-56, were fourth in the NL Central.

Kevin Tapani (7-11, 4.15 ERA) took the mound for the Dodgers in his third start after a midseason trade from Minnesota. Jacob Brumfield greeted him with a single to right, then advanced to second on an errant pickoff throw. Tapani got two outs, then Jeff King and Nelson Liriano each doubled scoring two runs before he could get the third out.

Esteban Loaiza (7-5, 5.17 ERA), pitching for the Pirates, was just beginning his itinerant pitching career.2 Chad Fonville, José Offerman, and Mike Piazza each singled, scoring one. A sacrifice fly by Eric Karros scored a second run to tie the game. Loaiza got Raúl Mondesi to strike out and Roberto Kelly to foul out to the catcher to escape any further damage.

Compared with the first inning, the second was efficient and quiet. All that happened was Mark Parent’s single off Tapani.

The scoring picked up again in the top of the third. Pittsburgh’s Al Martin grounded out, but a double by Orlando Merced and a single by King untied the game in favor of the Pirates. King stole second, then moved to third on Liriano’s single. He scored on Jay Bell’s single: 4-2, Pirates. Tapani induced a fly out and a strikeout to get out of the inning without further scoring. In the bottom of the third, the Dodgers did not even it up: They got as far as “first and second with one out,” but Karros lined into a double play to kill the rally.

The Pirates padded their lead in the top of the fourth. After Loaiza grounded out, singles by Brumfield and Martin and a walk to Merced loaded the bases. King grounded into a force out at second, scoring Brumfield. The Dodgers got out of the inning when Martin attempted to steal home and was caught in a rundown. Tim Wallach’s single was all for the Dodgers in the bottom of the fourth.

The Pirates added to their lead in the fifth. A pair of one-out singles put runners on first and third. One run scored when Parent singled off Dodgers reliever Rudy Seanez. After Loaiza bunted the runners over, Seanez walked Brumfield to load the bases. Dodgers manager Tommy Lasorda tried a third pitcher, Mark Guthrie, who did get out of the inning, but only after giving up another run on Martin’s single, bringing the score to 7-2, Pirates. In the bottom of the frame Loaiza retired the Dodgers on six pitches.

Guthrie continued pitching in the top of the sixth, allowing only a two-out triple to Bell. The Dodgers began clawing their way back in the bottom of the inning. Loaiza allowed a single to Piazza, then a one-out triple to Mondesi, scoring Piazza. Kelly singled on the next pitch, scoring Mondesi. After Loaiza allowed yet another single to Wallach, Pirates manager Jim Leyland pulled him in favor of Dan Plesac, who got two quick strikeouts to end the inning with the score 7-4, Pirates.

John Cummings was the next Dodgers reliever, tasked with facing the bottom of the Pirates order in the top of the seventh. All he allowed was a single to Plesac. It was the only hit of Plesac’s 18-year career. Plesac got one out in the bottom of the seventh, but after he gave up a double to Offerman, he was pulled in favor of Mike Dyer, who walked Piazza. Karros’s single and Mondesi’s sac fly brought in two runs, bringing the score to 7-6, Pirates.

The score remained unchanged in the eighth. After Dyer hit Mitch Webster with a pitch, Jason Christiansen (the Pirates’ fourth pitcher of the day) faced one batter, finishing the bottom of the eighth by striking out Delino DeShields.

Midre Cummings singled off Antonio Osuna, the Dodgers’ fifth pitcher, to open the top of the ninth. But Parent grounded into a double play and Johnson struck out to send the game to the bottom of the ninth with the Pirates clinging to a 7-6 lead.

Dan Miceli, the Pirates’ usual closer, failed to hold the lead. He walked Offerman, who advanced to second on a wild pitch. He struck out Piazza but after an 11-pitch battle, Karros doubled, scoring Offerman. The Pirates chose to intentionally walk Mondesi. The strategy paid off: Kelly was out on a foul pop and Wallach struck out to end the inning with the score tied, 7-7.

Osuna continued pitching the top of the 10th. The Pirates started with back-to-back singles from Brumfield and Martin. Osuna was well on his way to getting out of the jam when Merced grounded out and King struck out without a run scoring. But one run scored on Liriano’s double, then two more on Bell’s single. Cummings flied out for the third out, but the Pirates had taken a 10-7 lead.

Miceli had no better luck holding a three-run lead than a one-run lead. Like his Dodgers counterpart, he allowed two singles, but had two out when the scoring started. Piazza doubled, scoring the two runners on base. Karros singled, scoring Piazza to tie the game at 10-10. Also like his counterpart, he got the third out without another run scoring.

Pedro Astacio took over the pitching for the top of the 11th. Parent reached on an error (and was pinch-run for by Angelo Encarnación, who stayed in to catch), then Steve Pegues singled. Brumfield made the first out on a fly ball, but the odds were looking good for the Pirates with runners on first and third with one out. The Dodgers intentionally walked Martin to load the bases. Merced grounded to first: First baseman Karros was able to throw home for the force out to prevent the run from scoring. King struck out to leave the bases loaded and the score tied.

Leyland decided on Jeff McCurry for the bottom of the 11th. Kelly singled, then Wallach doubled, advancing Kelly to third. Astacio struck out. Webster was at the plate with a one-strike count. McCurry’s next pitch bounced in the dirt. Catcher Encarnación blocked the ball with his body. He scooped up the ball with his gloved left hand, but the ball bounced into his mask which he was holding with his right hand.3 Lasorda popped out of the dugout to point out the potential rule 7.05(d) violation to plate umpire Brian Gorman.4 Gorman conferred with crew chief Harry Wendelstedt, the umpire at third.5 Wendelstedt felt that Encarnación had deliberately used his mask, and once the ball is caught “in a mask or cap that has been removed from its proper place on the uniform” then two bases are awarded.6 The umpires agreed that a violation had occurred, so the winning run crossed the plate in the form of Roberto Kelly for a final score of 11-10, Dodgers.

That ended the game (after 12 pitchers, 39 hits and over 4½ hours of play) but it didn’t end the discussion. Leyland initially protested the game, although the Pirates did not file the required formal protest as they expected to lose. Leyland agreed that the ball ended up in the mask but argued that the rule was not intended to apply to such a situation. His position was that it was intended to preclude throwing a cap or mask at a ball that was getting away from the player. Wendelstedt said he had been umpiring for 30 years and could recall only one other time he’d made that call.7

As an odd footnote, the Dodgers had lost a game on July 31, 1992, on the same rare rule violation.8 Catcher Mike Scioscia was charged with the same error, scooping a ball in the dirt with his mask, which scored the winning run for the Padres.9

The Dodgers needed this win: They won the NL West by only one game. The Pirates spent the year bouncing between fourth and fifth place in the NL Central, finishing in last place, 27 games back.

2 Loaiza played for eight teams in his 14-year major-league career, followed by three seasons with three teams in Mexico.

3 Or, if you take another reporter’s word for it, he actually scooped up the ball with his mask. Jim Ingraham, “Dodgers Win on a Scoop Shot,” San Bernradino County Sun, August 13, 1995: C1. The “bounced into his glove” version fits better with the quotes from Lasorda and the umpires’ lengthy discussion.

4 Coincidentally, Gorman had been the third-base umpire in the July 31, 1992, game between the Dodgers and Padres mentioned near the end of this account.

6 This was Encarnación’s first error of the year (in his 26th game), but definitely not his last. He ended up tied for fifth in catcher errors for 1995 with seven, although he had fewer games (55) that the other catchers “ahead” of him on the list (80-122).