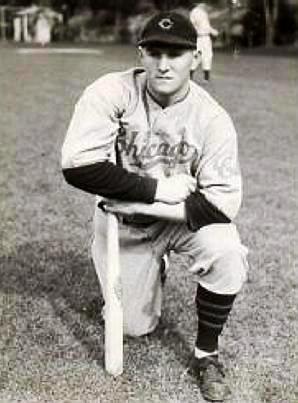 The middle of August is often called the “dog days” of summer and of the baseball season. It can be hard to generate interest or excitement because the season has been going for more than four months but late-season pennant races have not yet gotten red-hot. The Chicago Cubs found a way by scoring a season-high 22 runs and spreading the offense around so that each starting position player got at least two hits on a Friday afternoon against the Cincinnati Reds. The morning of August 13 found the Cubs sitting at 65-37 and solidly in first place, with a comfortable 6½-game lead over their closest competitors, the 58-43 New York Giants. The Cubs were a robust offensive team that year, leading the NL in runs scored per game (5.5) thus far. At the same time nobody could have expected just this kind of offensive outburst on that day when manager Charlie Grimm’s Cubs welcomed Chuck Dressen’s 41-57 Reds to Wrigley Field. In eight previous meetings between the two teams, the Cubs had averaged 4.9 runs scored and 8.5 hits against Reds pitching, but on this afternoon the Cubs’ bats were much more active.

The day before had seen the Cubs on the wrong end of a decisive 16-6 win by the Pittsburgh Pirates. The Cubs burned through four pitchers, including starter Tex Carleton and the 13-year veteran Charlie Root. With a depleted pitching staff coming off that kind of game in mid-August, one could be forgiven for not expecting much excitement from the home squad the next day. Apparently, the Cubs’ faithful were not deterred, as 10,732 paid ticket-holders, plus “a flock of women guests,” according to the Chicago Tribune, came out to witness the first game of a four-game series.1 Every Friday at Wrigley Field in this era was Ladies Day, which meant that women were admitted to the game free. While figures for this date are not available, there were often as many as 10,000 women in attendance who were not accounted for in the official tally.

Roy Parmelee started for the Cubs and things started to look similar to the day before. The 30-year-old Parmelee was in his first and, as it would turn out, only year with the Cubs at the end of a career highlighted by three years as a regular if unspectacular starting pitcher for the New York Giants. He came into that day with a 7-6 record and an ERA of 4.78 in 130 innings. Parmelee had been used in a mixed role so far, with 16 starts and nine relief appearances. In the second inning, Parmelee gave up four runs on three singles and two doubles. The scoring was capped off by a single by Hub Walker, driving in Cubs pitcher Paul Derringer, who had doubled in two runs. At that point, Grimm called on the veteran Root, who had pitched the final inning the day before.

At 38, Charlie Root was near the end of his career, but he was still a mainstay on the mound for the Cubs. He was a regular at Wrigley Field from 1926 until 1941 and still holds the Cubs record (as of 2017) for wins at 201 though he may be most remembered as the pitcher involved in Babe Ruth’s “called shot” in the 1932 World Series.

Root got out of the inning with a fly ball to center field. He then went the rest of the way in relief, pitching 7⅓ innings and giving up only four hits and two runs as the Cubs turned the offensive tables and allowed him some breathing room.

In the bottom of the second the Cubs responded with four runs, three singles, two walks, and an error by shortstop Billy Myers. The big blow was a two-out, bases loaded single by second baseman Lonny Frey, driving in two runs before Derringer was relieved by Wild Bill Hallahan.

Phil Cavarretta, the Cubs’ 20-year-old first baseman, led off the bottom of the third by reaching when Reds second baseman Alex Kampouris botched his grounder. As the Chicago Tribune put it, “Kampouris made the arrangements for the nine run third inning by proving that two errors could be made on one play. He fumbled Cavarretta’s grounder and then after losing the runner, threw wild to first.”2 Cavarretta ended up on second, then scored on a triple (one of only two extra-base hits by the Cubs that day) by the next batter, Frank Demaree. The power- hitting cleanup batter Demaree was in the midst of a streak of 20 straight games reaching base safely. Three consecutive Cubs singles drove Hallahan out of the game in favor of Joe Cascarella. A walk, a bases-loaded groundout by pitcher Root, three singles, a walk, another single, and another bases-loaded groundout saw the Cubs plate nine runs on eight hits. Fourteen Cubs batted in the inning, and the rout was on.

The Cubs’ other big inning was the eighth; it began with the Cubs up 16-6 and Reds reliever Jake Mooty facing the top of the lineup. Stan Hack opened the inning with the Cubs’ only other extra-base hit, a triple to left field. The Cubs managed just three more hits in the inning, all singles. But three walks, two errors, and a passed ball allowed six runs to score, finishing the scoring for the day as 10 men came the plate in the frame.

This 22-run outburst was the Cubs’ highest scoring output for 1937, but their 21 hits were not a season high. They knocked out 23 hits in a 14-inning victory over the St. Louis Cardinals on July 5. Against the Reds, Demaree and Ken O’Dea led the Cubs with four hits each. The Cubs scoring outburst was even more remarkable for the absence of their two best sluggers. All-Stars Billy Herman had a turned ankle and Gabby Hartnett catcher Hartnett got a breather after the long day behind the plate the day before.

Though the Cubs had only two extra-base hits, they benefited from eight Reds errors and nine walks. Their hits were spread among the team; each starting position player (all of whom played the entire game) had at least two hits.