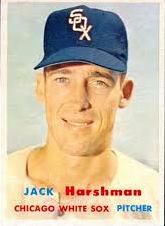 When Chicago White Sox pitcher Jack Harshman shut out the Detroit Tigers on August 13, 1954, it was the second time in less than three weeks that the number 16 would be significant for him.

Harshman outdueled the Tigers’ Al “Lefty” Aber in an historic 16-inning contest that ended in a White Sox 1-0 victory. The left-handed rookie had pitched a complete-game gem against the Boston Red Sox on July 25, when he recorded 16 strikeouts for a White Sox record.

Before the 1954 season, Harshman had pitched in only two major-league games, in 1952 with the New York Giants. He had broken in with the Giants as a first baseman in 1948, but had been converted to a pitcher by the Giants after unsatisfactory performance at first.1

Harshman, 26, was a nice addition to the White Sox starting rotation, which included veterans Virgil Trucks, Bob Keegan, Sandy Consuegra, and Billy Pierce. Coming into the game against the Tigers, he had a 9-6 record, including two shutouts and six complete games. In his most recent outing, he threw a seven-hit shutout against the Washington Senators.

Aber entered the 1954 season having pitched in fewer than 25 games over two years. The left-hander had been traded to the Tigers in June 1953 in a deal with the Cleveland Indians that involved seven other players. His record was 4-6 before the game against the White Sox.

In the top of the ninth inning, the Tigers mounted their biggest threat to that point when they put runners on first and third with two outs on singles by Aber and Harvey Kuenn. But Harshman got out of the jam again when he retired Bill Tuttle on a pop fly to the catcher.

In the bottom of the 10th, Harshman nearly took matters into his own hands. Ex-Tiger Johnny Groth singled with two outs, the first White Sox hit since the fourth inning. Harshman, a decent hitter from his days as a former first baseman, sent right fielder Al Kaline to the wall in right-center. A wind blowing toward left field kept the ball in play, and Kaline made the catch.2

The White Sox threatened to end the game in the bottom of the 12th, when Matt Batts singled with one out. Pitcher Billy Pierce ran for Batts. Cass Michaels walked, putting runners on first and second.

White Sox manager Paul Richards sent up Ed McGhee to pinch-hit for Jim Rivera, who had struck out twice against Aber. But Aber induced a 6-4-3 double play to end the threat.

The Tigers took their turn at trying to rustle up a run in the top of the 13th. With one out, Walt Dropo walked. Kaline’s groundball forced pinch-runner Reno Bertoia at second. Red Wilson’s single moved Kaline to second base. A tired Harshman dug deep to make Bob Nieman fly out to end the inning.

The White Sox advanced Nellie Fox to third base in the bottom of the 14th inning with two outs, but Aber retired Carl Sawatski on a grounder to second to squelch the potential winning run.

By the top of the 16th Harshman had already faced 60 batters in the marathon game. He walked Wilson, who took second on Wayne Belardi’s sacrifice. Aber hit a smash to shortstop Michaels, who threw out Wilson trying to advance to third base. After a walk to Kuenn put a runner at second base again, Tuttle failed for the second time to bring in the run.

Chico Carrasquel led off the bottom of the 16th, the 54th batter faced by Aber. He singled to left field. Fox bunted but catcher Sawatski grabbed the ball and forced out Carrasquel at second base. The triumph was short-lived: Minnie Minoso tripled to right field for the walk-off victory for the White Sox. Minoso’s hit fell a few feet behind first base, just inches in fair territory, curved, and bounced off the wall in front of the right-field box seats. An usher stationed down the right-field line attempted to stop the ball, but it quickly zipped past him without his touching the ball. Right fielder Kaline mishandled the ball momentarily in his haste to get the ball back into the infield. Second baseman Bertoia relayed the ball home, but Fox beat the throw to the plate. Tigers manager Fred Hutchinson contested the play, claiming that the usher interfered with Kaline’s fielding of the ball. But umpire Ed Runge rejected Hutchinson’s argument.3

Harshman gave up nine hits and seven walks while striking out 12 in his third consecutive win. The Tigers’ Ray Boone accounted for four of the punchouts.

Aber was the hard-luck guy on Friday the 13th. He pitched the best game of his career, scattering nine hits and three walks. The White Sox were 0-for-8 with runners in scoring position.

The White Sox led the American League with 21 shutouts in 1954. Harshman contributed four, while Trucks added five and Pierce four. Although the White Sox were in pennant contention on August 13, the Cleveland Indians wound up breaking the pennant race open with two substantial winning streaks, winning 111 games to win the American League pennant. The White Sox finished a distant third with 94 wins.