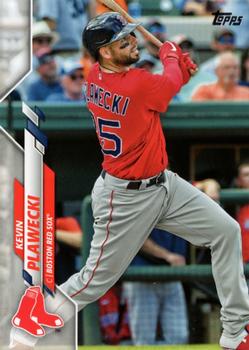 The Red Sox were not having a good year. They had won their Opening Day game 13-2 but followed with two four-game losing streaks within the season’s first two weeks, leaving them at 6-12, last in the AL East. The visiting Tampa Bay Rays, on the other hand, were 11-8, just 1½ games back of the AL East-leading Yankees. They were riding a five-game winning streak, including beating the Red Sox in the first three games of this series by a total score of 25-14.

Trying to avoid being swept in the four-game series, the Red Sox sent Kyle Hart to the mound for his major-league debut. In the 2020 regular season no fans were allowed in the stands, but Hart’s brother flew to Boston to be close to him and was drinking in a local bar watching the game.

Hart’s debut did not start well. He walked Mike Brosseau on four pitches. José Martínez hit a grounder up the middle. It could have been one or two outs, but the ball ran up rookie second baseman Jonathan Araúz’s arm for an error and the runners were safe on first and second. Yandy Díaz’s single put Tampa Bay on the board. Hart kept his composure and struck out Hunter Renfroe and Brandon Lowe. (Yes, they kept the first strikeout ball for him – that didn’t change in 2020.) Willy Adames’s bloop into center scored another run for Tampa. Manuel Margot flied out to end the inning, but Tampa Bay had two (unearned) runs on the board.

Tyler Glasnow (0-1, 5.56 ERA) was making his fourth start for Tampa. He didn’t appear to be having a good year either: His ERA had increased in each game and he didn’t make it out of the third inning in his last start. Alex Verdugo doubled off the left-field wall, took third on a passed ball, and scored on Rafael Devers’ bouncer into left. J.D. Martinez walked and scored (with Devers) on Kevin Plawecki’s double, giving Boston its only lead of the game, 3-2. That hit briefly pushed Plawecki’s average above .500 (8-for-15 in the young season). Araúz singled, but Jackie Bradley Jr. flied out to leave the two men on base.

Hart’s second inning of work wasn’t perfect (he walked Brosseau and balked him to second) but he collected two more strikeouts and allowed no runs. Glasnow settled down as well, with a one-two-three inning.

The wheels came off for Boston in the third inning. Hart allowed back-to-back home runs to Renfroe and Lowe. Adames doubled, Margot singled – and then the game went into a six-minute “drone delay.” Umpire crew chief Hunter Wendelstedt called the players off the field when a drone appeared over the field, only allowing play to resume when the drone was no longer in the no-fly zone around the ballpark. Yoshi Tsutsugo continued his interrupted at-bat and singled home another run, ending Hart’s debut. He gave way to Phillips Valdéz, leaving runners on first and third, no outs, and the score 6-3, Tampa.

Valdéz limited the damage. Mike Zunino grounded into a fielder’s choice, but another run scored. The inning ended on a Martínez comebacker that started a double play.

Boston got one run back in the bottom of the third on Araúz’s two-out double, but the 7-4 score was as close as the Red Sox would be for the rest of the afternoon.

Díaz singled to open the fourth. Renfroe grounded into what should have been a double play but third baseman Devers threw the ball past Araúz, who was standing on second. Lowe singled in another run. Margot hit a one-out grounder to third. This time, Devers1 threw the ball past the first baseman, allowing yet another unearned run. Tsutsugo’s sacrifice fly scored a third unearned run for a 10-4 Tampa lead.

With that three-run inning, this was now the sixth consecutive game in which Tampa Bay had scored at least eight runs as the visiting team at Fenway Park.2

Boston scored one in the bottom of the fourth on doubles by José Peraza and Martinez.

The fifth inning went quickly. Valdéz needed only 11 pitches for the first one-two-three inning for Boston pitching. Jaleen Beeks needed one more pitch but also had a clean inning.

The Rays’ scoring resumed in the sixth against Marcus Walden. Renfroe walloped his second home run of the day – completely out of Fenway Park.3 Lowe walked and scored on Adames’s triple. Margot’s single scored Adames. Tsutsugo singled, putting runners on first and third – who scored on Zunino’s homer over the Monster. With the score now 16-5 in favor of Tampa, Red Sox manager Ron Roenicke called on Josh Osich – who got three quick outs to end the frame.

All Beeks allowed in the sixth was a double to Peraza.

Although Osich did not allow a run in the seventh, it wasn’t easy. Devers committed his third error of the game. Adames struck out, missing a chance for a natural cycle. Margot singled, giving him his second four-hit game of the year.

Anthony Banda, appearing in his first game of 2020, pitched the bottom of the seventh. Michael Chavis4 hit a one-out triple and Banda brushed Kevin Pillar’s elbow guard with a pitch to put runners on the corners. Plawecki grounded into a double play to kill the scoring opportunity.

Neither team allowed a baserunner in the eighth inning.

Since the game’s outcome was highly unlikely to change in the ninth inning, the Red Sox asked Peraza to pitch the ninth. (He had pitched twice in 2019 in similar situations.) He allowed a base hit to Díaz and a double to Renfroe. Lowe’s comebacker scored Díaz, but also hit Peraza just below the knee – and deflected to first for the out. Peraza managed to walk off the field, but he had to come out of the game. Boston needed another pitcher to finish out the inning.

Roenicke called on Plawecki, who also had experience as a “position player pitching,” with four previous mound appearances.5 The lineup shuffle to get Peraza on the mound had triggered the loss of the DH position for Boston. The 2020 rules included a universal designated hitter for both leagues, but (as in other years) if the DH was lost, the pitcher would have to bat.6

Plawecki walked Adames but got Margot to line out and Tsutsugo to fly out to end the inning, preserving his 2020 0.00 ERA.7

Despite the 17-5 score, Boston did not go quietly in the ninth. Verdugo walked and Chavis hit a two-out single. They both scored on Pillar’s double halfway up the Monster. That brought up Plawecki, now in the lineup as a pitcher. He singled as well, scoring Pillar and making his mark in the 2020 history books in the process. In 2020, no other player designated as a pitcher collected a hit (although 15 other pitchers had at-bats).8 Araúz looked at strike three to end the 17-8 rout.9

Since Banda had pitched three innings, he was credited with the first save of his career, despite the lopsided score he had been called on to protect.

Neither team saw a change in its fortunes between this game and the end of the abbreviated season. Boston finished at 24-36, last in the AL East. The Rays finished at 40-20, losing the World Series to the Dodgers, 4-2.

In addition to Baseball Reference, Retrosheet, and the sources cited in the Notes, the author reviewed the broadcast on MLB.com.

3 The distance was unavailable, as the technology for measuring the distance had broken down earlier in the game. But the video showed that the ball cleared the ballpark to the right of the Green Monster.

4 Chavis had replaced Mitch Moreland in the top of the seventh, playing first base.

7 It also lowered his career ERA from 7.20 to 6.35. Plawecki did not have another chance to pitch in 2020. The next time the Red Sox needed a position player to pitch, they called on Tzu-Wei Lin, who pitched one inning in a 13-1 loss on September 24.

8 https://stathead.com/tiny/KiTt9. Some people may dispute this statement, given that Plawecki is not generally a pitcher. Russell Eassom, “How do we solve the Plawecki-Mikolas-Flaherty Problem?” February 15, 2021. http://batflipsandnerds.com/2021/02/15/how-do-we-solve-the-plawecki-mikolas-flaherty-problem/ Retrieved March 1, 2021.

9 The 17 runs were the most scored by Tampa Bay in the abbreviated 2020 season.